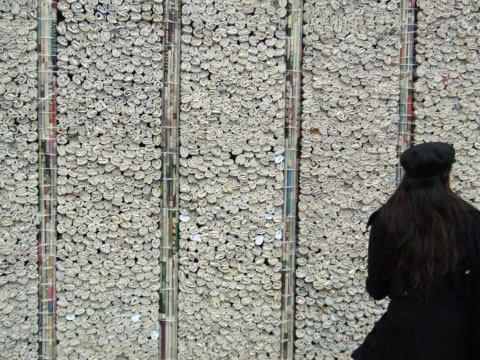 A house made of newspapers? Why? Where? By Who? Whatever for?

tens of thousands of papers, each individually rolled, to form a house.

What no one expected was that it would be a valid if somewhat time consuming method of building a strong, warm structure.

While it is foremost an art work, it has something to say to us about the true value of this neglected and disrespected material, paper!

The Guardian Environment has podcast a short version of the documentary of Newspaper House, directed by Gillian McIver, with Christna Zaris & Rozy Sarkis.

A short doc video about the project, podcast on "Building Design" –

I'm writing this on behalf of the Newspaperhouse team, because it's got to be a team effort this, to make ahouse out of tens of thousands of the free newspapers that litter London's streets and transport every weekday.

It's my job to document the project with cameras, and I'll post the photos here as they come.

The artist who's designed and mae the House is Sumer Erek. You can see more about him and his work on www.sumererek.com

From the end of January 08, the Newspaper House was constructed in an old church hall in Dalston, by Sumer and his stalwart team of volunteers.

On March 03 the House was moved [!] to Gillett square in Dalston, and open to the public to come and bring their own papers to help to build up the final part of this big installation.