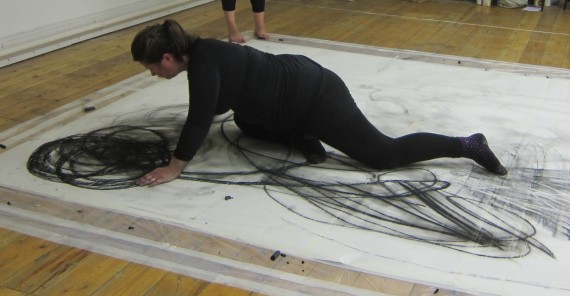 0 Comments
Viewing single post of blog The Next Stage

LIFE CYCLE WITHIN A SMALL BOX AND OTHER STORIES

Back in. We were to devise our second solo performance. This time we had 25 minutes to explore, but the performance was to be kept to 3 minutes. We were to use only our body (so no speech), we were to make a problem about the limits/ border of the space/ or the cavity, the whole, the emptiness. We were to use either the entire room or smaller, more specific space, even if it was just the palm of your hand…… we need to make sure that the borders were defined, clear. Think of a performance construct – a beginning, a middle and end, there is a start and end that is clear so that the audience knows.

I think for our Group #2 performance, I had explored a small space within the centre of the room – on the floor. Although it was made from one continuous sheet of rubber, there were marks, slight grooves that gave the hint of small rectangles within its large expanse. I chose one of these to devise my piece within. I was intrigued by the limitations that a roughly 6ft by 4ft space would provide me. I was also interested in pace; throughout the day I had been operating at moderate speed, moving within a couple of low gears, and wanted to push the notion of fast movement within a small constricted space.

I had recently performed a pilot of a performance art piece (which I had devised) called ‘Light Kills Darkness, Here I Am’ that examines the theme of mortality. I wanted to draw on this and test how I could potentially apply the days learning to it (for this piece I am live drawing within a restricted space – only a bit larger than the one I was currently contemplating). 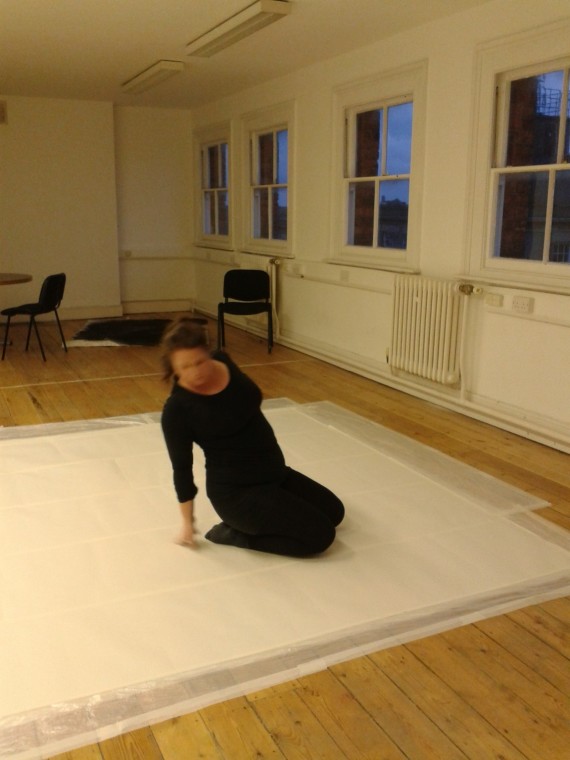 Lying down within the rectangle conjured up the feeling of a warm protective womb. But there were converse sensations; these physical boundaries, these enforced restrictions reminded me of a prison cell. The metaphor of life (with its own restrictions and limitations, whether fiscally, mentally or emotionally) came to mind and although this is a much explored subject, I thought a performance about a life cycle, within the constraints of limited space and time would be interesting to devise.

After writing a basic score, I proceeded to rehearse. I now had twenty minutes. Time went very quickly. I found that manoeuvring my body within a small space was quite tiring, I had to push and pull it, squeeze and roll it. I had to stop and start, go fast then slow; as if on some intense army fitness regime. I wanted every movement to have a purpose, so that it imbued meaning. I didn’t want it to look careless or scrappy. I wanted the smallest and slowest of movements to be just as impactful as the large and the fast. I found that I needed to quickly edit the content. We were going to be timed and an alarm would go off after three minutes had passed. This wouldn’t be an instruction to stop but a suggestion that we should create an ending at some point close that sound being heard.

It was time for our performances. We voted to organically decide when we would perform, choosing a point when our performance would naturally sit alongside or challenge against another.

We were encouraged to take notes during the performances:

Shapes within a space. Folded, screwed, flat, high. How do we look at those? Audience to change perspective? Up to the audience. Nature of space changes as to viewpoint. Performer stays still amongst the audience. The paper is the performer.

Around the room, with a finger. Following an exact line. Across each surface. Around the architectural details.

Tracing a line up a beam. Very carefully. Slowly, purposeful. Then again behind it. Discovers that it moves. Discovers can lift up from it. Can balance from it.

The audience during this performance were perfectly placed for me to be able to move them subtly to where I would like them to be for mine. I readied myself. The performer silently indicated that she had finished. I made a distinct movement and indicated to the audience where I wanted them to stand (or sit, I didn’t mind which). I wanted them nearer to me this time (compared to my first performance when they were distant); I wanted it both to be intimate and provocative.

I climbed into the womb. I had taken care during my rehearsal not to ever go over the edge. I had measured my body to make sure that I could twist, turn, rise and drop without breaking through the boundary. I explored the space as a foetus. I was blind, I couldn’t see. I explored through my fingertips, next my elbows. I wriggled and squirmed until I was free. I opened my eyes. I lay still. Then I kicked and lifted my head, I rolled over and shuffled along. I got onto my knees and crawled, investigating the confines of my play pen. I stood up, I wobbled, I walked, and I jogged. I ran around and around and around and around, ever faster. Then fell to my knees. I paused. I stood up and changed direction. I tentatively jogged. I slowed to a stooped walk, then stooped further down until I was laying on the floor. I reached out, exploring my environment with my fingertips, then stopped.

I lay there, breathing heavily. Not wanting the noise of my breath to detract. My heart was racing. I stood up and although we had been asked to not verbally indicate the ending of the performance, I uttered an ‘ok’. I was physically exhausted and needed to calm my heart rate down. The ‘ok’ was to myself as a confirmation that I had got through it – without collapsing. I had felt dizzy and disorientated, but vehemently determined to keep going.

Questioning the audience. Interacting through facial expression. Exploring the surface of something. Pushing it. Testing it. Sharing their inquisitiveness.

Preparation of a space within a performance. Acrobatic. Agile. How to manoeuvre. Outside and inside something. Can’t see, but we know what she is trying to do.

Different ways to use a table and chair. Crawl, on top, sit on, stand on, lay on, sit inside, chair on top, chair inside, chair and table on top of person, become a table.

Space is inside the stomach. Exploring breathing. Expanding the stomach. Space within that and the lings. Expand contract. Take in breath, let go. Like an animatronic doll.

Explore a space just using the back and the head. Turn handles, master manoeuvres, use just cheeks on the face. Minutiae movements. Unassuming. Quiet. Quite transfixing.

Space around us (in the world) is shrinking. There are more boundaries, we are more restricted. We have a need for expansion and space. Something moving about small gestures. Vulnerability throughout the pieces. Which reminded Vlatka of a need to close down or break those boundaries. Within those boundaries – puts bodies in precarious positions. In between spaces, inside our minds. Exploring a border also engages your own body. Empathy with a space. An object, a texture. Kinaesthetic energies/ empathy with audiences?

There are Two Strands Emerging:

In the process of economy of means and testing a space, the body becomes the measure of the world it occupies. Feeding off:

Body and Testing, Testing and Body

How we approached the task/ different performative strategies:

THE END OF THE DAY AND THE NEXT DAY

It was time to go home, or in my case, my cousin’s, where I was staying over. I felt fine, head full, yes, but physically fine. Adrenalin probably, or a creative high. I got changed and made my way to Finsbury Park. Felt fine, felt fine, felt fine. Arrived at the house. Chatter, chatter, cup of tea, chatter, chatter. Could feel my body starting to crash. I needed to sleep. But I felt sick. Hunger?  Ate a late tea. Still felt sick. Then it started. And lasted through the night. Poor cousin R – can’t be nice hearing someone throw up throughout the night.

Had to admit defeat and phoned in sick on the Sunday morning; I was going to have to miss the second day of this wonderful workshop. Couldn’t even make notes and reflect. I was hot then cold. Hot then cold. Waves of sickness. Couldn’t stand up. The day came and went. The time for my train home was nearing. Couldn’t face a tube journey to the station, so treated myself to a taxi.

9th April. I started writing this. I started the process of remembering all that had happened, all that I had learnt. The process of remembering the day has been quite a task. And even with all of the above, I haven’t really started the process of relating it to my practice. What will I do with this knowledge? How will I apply it? To help me with this, I have gathered together a list of words – an inventory of words in homage to George Perec. Words that either Vlatka had said or that I had noted:

I hope that I haven’t repeated any.

Over the course of the next few weeks, I will attempt to reflect at a far deeper level; analyse, relate and consequently, consider how I can utilise.

This might form the content of my next post, but it may not. There’s a mentoring session ahead of me, hovering on the horizon, which will require much preparation. That may need to take precedence.