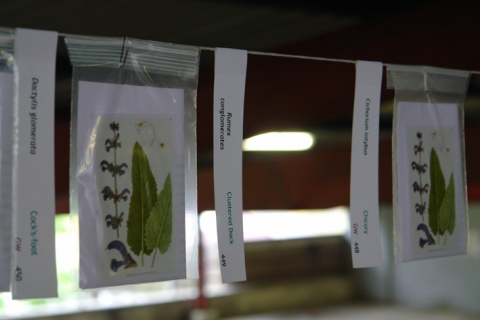 Last spring, I was asked by Christine Gist if I were interested in developing a piece of work for a group show titled ‘Interventions in the Landscape: Paradise Revealed’ at Pines Gardens, St. Margaret’s Bay in Kent. In the meantime, I have been there for a visit and became intrigued by the social geography of the garden.

After returning home, I gradually developed the pieces for the two sites. The one for Pines Garden was straight forward as I knew what I was doing. The other for the car park became rather a challenge accompanied by the whole set of pre production stress induced convoluted emotions. This could be partly explained by the fact that I couldn’t use my usual media due to no electricity, only partial invigilation and small production budget. However, even though I must have changed my plans about 4 times, I think it was highly productive. There is something to be said for the right amount of anxiety. Being not able to work with video or photography forced me to look carefully at other ways of communicating an idea and in the end I rather liked what I did. I even think that it actually has developed my practice in a new direction, one which I would like to follow further. And that is more than I usually can say when I do new work in the mode of low flying.

When is the right time to write a blog? Or in my case, is there ever a right time? I realise by now that my rather elaborate approach to writing a blog might have been part of the lack of continuity. (Apologies to everyone it may concern.) Hence, this will be the last entry to this blog.

I did the last bit of research in St.Margaret’s in March and this was done with a rather stinking cold and I fear that I did not only collect information but also was passing on more than a fair share of Bristol germs. After all, there is such a thing as reciprocity. However, I was quite lucky and stayed with two guys who were in the process of setting up a raw chocolate workshop and I had to do a lot of sampling. 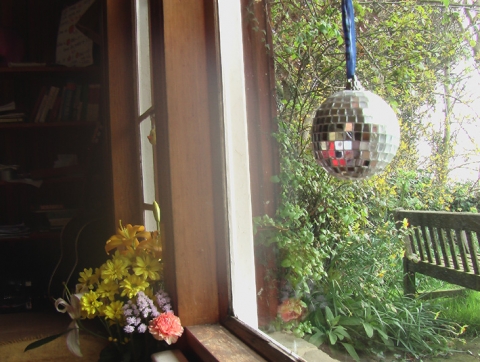 Day three: In the morning, I met Linda Winter whom I had met at the aquarelle class. She is a neighbour and her garden borders onto Pines Garden. All in all, she was very positive about Pines Garden and niggles like the state of the road or the overgrown trees didn’t seem a reason for conflict. The only thing she felt was negative was the pricing of the Pines Calyx which seems to be so high that it is out of reach for local use. However, when I asked her how often she uses Pines Garden, I was quite surprised about her answer. On average it is once a year when they have visitors who have not been to St. Margaret’s Bay. The reason why she doesn’t use the garden on a daily basis is simple. There is only one entrance/exit at the bottom of the garden. Hence when she walks her dog, she’d rather follow the road along Pines Garden instead of going in and out at the same end.

Last on this research trip, I talked to Alistair Gould, the founder’s grandson. I thought I’d try to raise issues which came up in the last two days such as parking and pricing and inclusion of local community. He explained that the pricing for the Pines Calyx is guided by principles of sustainability. Simply put it means that if they are able to charge large amounts to small groups of people it has less negative impact on the local community. However, it seems to me that this policy is also somewhat inflexible and stops many things from happening. So has for instance been interest from musicians but as the Calyx has space for only a small audience, the hire fee simply makes it impossible. I think that I might raise this issue with Alistair again another time. Parking, another issue, is likely to be eased as the trust is in the process of transforming land into parking spaces pending planning permission. However, this parking space is mainly thought for visitors to the Calyx and the future accommodation. This is partly because visitor numbers to Pines Garden are intended to be kept small in order to minimise the impact on the local infrastructure. When I asked him about the garden however, there seemed to be comparatively little agenda. There is a long term plan to change the garden to become more self sufficient following principles of permaculture. In respect of implementation he was rather vague. To me as an outsider this seems to be rather hard to understand as the garden in my view appears to be at the core of Pines Garden. But maybe there are other reasons for this which might become clearer during my next visit. After finishing this last interview, I left to return to Bristol with my bag full of minidisks and lots to think about.

Continuation of Day two: Next I went on to meet Alistair Gould’s mother Pauline. She provided excellent background information on the beginnings of the gardens. Just one thing out of that: before the gardens were bought, there was a small holding which, from today’s point of view, would have ticked quite a few boxes in respect of sustainability.

After that, Christine had arranged to meet with Brenda Paul who is chair of the Parish Council but also happens to be a very active member of the local Women’s Institute. We met her at the local village hall where she was in the middle of facilitating an aquarelle class. Obviously, talking to her in depth was not possible but I found out that she is also involved with turning St. Margaret’s into a sustainable village and I will have to talk to her about this further. I also managed to make contact with quite a few women who are either volunteers at the garden or live in close vicinity to it. This was rather fortunate as I plan to talk to more neighbours at the next visit and the trust has been rather apprehensive due to its mixed feelings about the neighbours.

After returning to my base at the gardener’s cottage, I met up with Edda Jones, artist who at the time was working at Pines Garden. Bay Trust had recently bought the 1960s bungalow where Edda stayed during the time of her residency. As the bungalow is not convertible and is in itself energy inefficient, it will be knocked down to make way for a new building. This is in view of extending Pines Garden’s enterprise to sustainable holiday and conference accommodation. Her position as a temporary guest could be described as partially neutral, as she was not paid by the Trust but still in some way committed to it. So was she able to be quite critical in how sustainability was being implemented but also saw the overall positive impact of the garden on the community.

Day two: This was a very long and full day. I think that I might have done about six hours of recording, that is interviewing and talking to people. I should add that Christine has been really brilliant and had not only arranged everything for my stay but also had set up a number of meetings ahead of my arrival.

First I met with Edmond Rube, who has been working at Pines Garden for one year but has been involved with Alistair Gould on various projects for fourteen years. His main responsibilities lie with the technical running of the Pines Calyx. However, as his technical expertise is rather wide spread, he also helps out in other areas. During the interview, I gained somewhat the impression that he didn’t fully trust my motives, which is a real shame. This led to rather more stereotypical and protective answers than I would have expected to come across in an organisation the size of Pines Garden.

After that, I talked to Chester Bradshaw who has been the main gardener for four years. I met him at the room which they use during their breaks. Next to being nicely heated, it also had a set of pin ups on the walls and I don’t know whether these or the actual content of this conversation might have made me perceive this interview somewhat dispiriting. To summarize briefly what we talked about: It became quite clear that Chester knows his job but also that he is neither particularly well informed on sustainability nor really interested in it. What he definitely cares about is the lawn and the lawn looks good. This made me think about how disjointed the agendas even within the core of the team working at the gardens are likely to be. In addition to that, I gradually became aware how much many of his answers were guided by his awareness of his place within the hierarchy at Pines Garden. By this there appears to be left little space for a personal vision of what could or should be done within the garden. What to add? Talk to a gardener if you were ever in doubt about the existence of a class system in Britain? All in all, this was still quite informative as it provided useful background information to the social structure of the garden.

Next I met Stan Lauder who is chairman of St. Margaret’s Society and his wife Stella. When I asked them how they actually use the garden, they said that they take their grandchildren and if I understood rightly they use it as a kind of playground. This is interesting insofar that it is a different way of engaging with the garden but also might indicate that there are not many public spaces with play facilities around.

I am a PhD candidate in the Photography Department at the University of Plymouth and receive research funding from the University of Plymouth and The 3d3 Center for Doctoral Training Programme. The focus of my practice research is on ‘Photography and its Contribution to the Understanding of Digital Porosity’. I exhibit widely, both nationally and internationally and have undertaken various residencies f.e. in New York, Rome or Victoria Baths in Manchester. To date, I have been awarded two major fellowships (Arts Council Austria, City of Bremen), the Prize for Visual Art of Upper Austria, and a Research Fellowship at Southampton Institute. website: www.claudiapilsl.com blog: https://loosespace.wordpress.com/ instagram: in_search_of_place