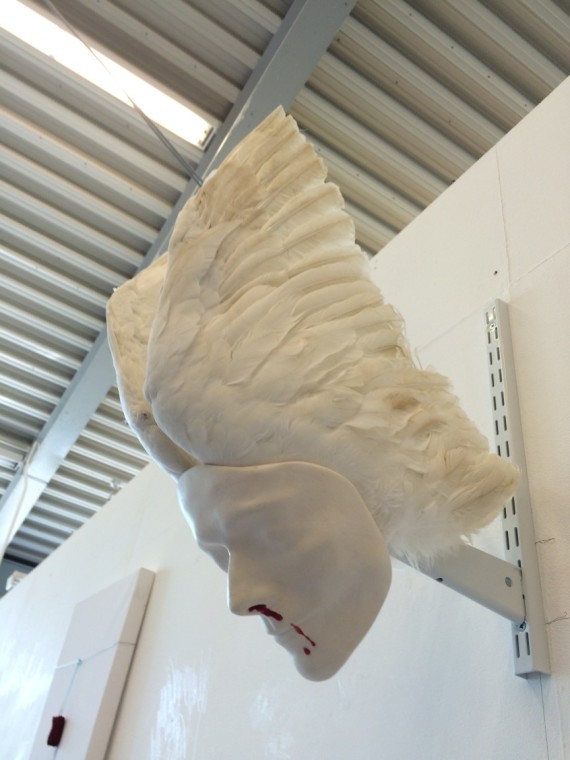 This work consists of three elements all looking at different aspects of the self including the featured image above; A woman in the role of the domestic house wife, repressed in her marriage, and after separating a sense of fallen, broken by the burden that comes with being a single mother in today’s society.

Louise Bourgeois tackled these issues through her art practice when she was in her late 30’s, not long after settling in New York, at a time when she was a wife and mother. In her works titled Femme Maison and Fallen Women the woman is incarcerated within the house; and latterly lying on the ground, helpless. See image captions for more details… In Bourgeois’ youth the term ‘Fallen woman’ had a double meaning: Literally – a women who had fallen over. Metaphorically – a woman who had disgraced herself by having sex out of wedlock, an affair, or becoming divorced was shunned by society, and such women were labelled as ‘fallen from grace’. Unlike today, to be sexual active as a woman, and divorced is completely acceptable.

Born in 1965, Lorraine grew up in the Highlands of Scotland. Studied an HND in Graphic Art and Design at Aberdeen College of Commerce from 1982 to 1984. Thereafter pursued a career as a freelance graphic designer and artist through the 80s producing logos, advertising, sign writing and sign making, heraldic art products and calligraphy. She produced a range of hand printed T-shirt designs, distributed through music festivals and venues. In 1991 Lorraine discovered the sandblasting process and pursued the development of the process to create high-quality tactile products for urban and rural locations in the forms of interpretive art and signage. Manager of Design and Product Development at Sirocco, Inverness (1991 - 1996). She went on to set up her own company (SSC) with then-husband Daniel Griffin, near Strathaven in Lanarkshire, Scotland and moved the company to Suffolk during 2006. Lorraine was Creative Director at SSC from1998 - 2016. In 2013 Lorraine returned to study a BA Hons in Fine Art, graduating in 2016 gaining a first. Followed by an MA in Fine art at university of Suffolk in 2018. Her studio practice focuses on the fragility of the human condition. Drawing on personal experience and those of others, her work suggests and creates narratives on social, cultural and political contexts. Commercially Lorraine works as a visual artist welcoming commissions for public art projects in the UK. She has developed the sandblasting process into an art medium, creating 3D imagery on timber, stone and glass for permanent installation for interior and exterior applications. The coupling of the chosen material with this process produces sustainable, durable works of art where issues of maintenance and vandalism can be addressed and overcome. Commissions, where community engagement is key suit Lorraine's methodology: To deliver public art where the community take pride and ownership of the work. Through process and outcomes working with community groups to create artwork to be sandblasted on finished structures placed in community spaces. Clients included Lavenham Community Land Trust, National Trust, Lovell Housing, Scottish Natural Heritage, Mid Suffolk District Council, London Zoo, Highland Wildlife Park. Worked for International artists: Simon Faithfull and Judy Boyd on a number of projects.