A few weeks into my stay in Senegal and I’ve really mastered the art of a well tucked mosquito net (after waking up with a cockroach on your head you really up your game).

Sleep is my holy grail here in Senegal. I consider myself not a squeamish character, so voluminous presence of insects doesn’t irk me much. But I’m unexpectedly disturbed by the constant noise of the city. Unfortunately I underestimate the impact of the nightly calls the pray, the chatter of the fruit sellers and the late night singing practice. After a month, my hopes of becoming accustomed to the noise are growing dimmer.

Luckily I find solace on roof of WAAW, laying on the concrete, watching ospreys and swallows circle above, the open skies comfort me.

Here, reading in the evening light, I’ve been following up on notes of the river goddess Mama Coumba Bang, collected from the residents of Saint Louis.

They are white, for luck

offering cow or sheep,  cut in half. the first half is divided into 30 pieces. 15 for sea, 15 for river. 2nd half is given to impoverished. white ox is the ideal sacrifice

be quiet on way and way back from giving her offerings

a young inexperienced girl makes an offering before rainy season. she takes a pirogue to centre of the river, women sing the entire time.

next to the bridge ‘waxande MCB – MCB armoir

Her sister ‘ mame cantaye’ guardian for the langue de barbarie.

times of day – njoloor (noon to 3pm) timis ‘twilight to 2am’ the spirits come out.

comes out end of the rainy season.

I have a lot more research to do on Mame Coumba Bang, but what I’ve discovered so far is already providing a wealth of inspiration for my practice. Ideas for my own interpretations are beginning to fester in my (sleep deprived) mind.

The fate of the Lebou has effected me, and has me preoccupied with the damaging aspect of magical thinking. In my previous works I’ve celebrated magical thinking as a preservation of cultural traditions, a protest of capitalism, and even a festive break from the monotony of modern life. But here magical thinking is a crux of the vulnerable, a place where marabouts amass large fortunes in return for the promise of cures.

More research at the WAAW library reveals further evidence of the Lebou problematic relationship with magic.

In August of 1999, at the peak of the atlantic hurricane season, a tropical depression four developed west of Senegal, resulting in Hurricane Cindy which flooded Saint Louis, destroying much of the Lebou settlement, devastating their fishing livelihood. The Senegalese government offered a pittance of compensation, but this went unchallenged by the fisherman, as they handled the situation with a remarkable passivity. Believing the hurricane was sent to destroy them as punishment for offending the river goddess, the Lebou only sought to appease the deity by throwing curdled milk into the river as an offering.

They turned down an opportunity to ask for vital funds to rebuild their lives, putting all their faith in the goddess.

This goddess is Mame Coumba Bang, a female deity that resides in the Saint Louis river. She has sparked my curiosity so I’ll now be spending some time researching this river goddess who has so much sway of the lives of the Lebou. 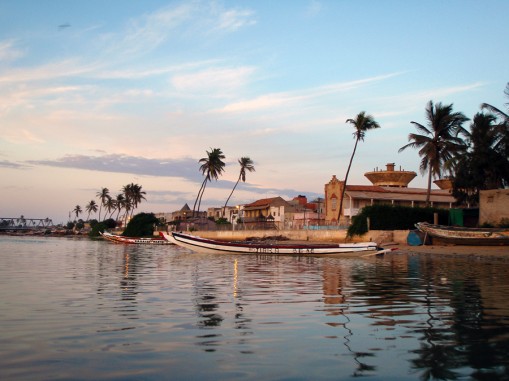 I’m standing on the beach in the north west of Saint Louis, pulling my shawl tighter around my head as the north atlantic gusts try their best to whip it away. The shoreline is littered with the waste from food production; the gulls furiously skawk and flap trying to fill their stomachs with fish entrails. Chicken heads and feet punctuate the dirty sandy, and a dead goat is unceremoniously flung into the tideline. The fisherman’s nets indiscriminately trawl the ocean and any species determined unfit for consumption are tossed aside, there is no place for animals with no economic value here I realise when stepping over a hammerhead shark on my way to the shore. 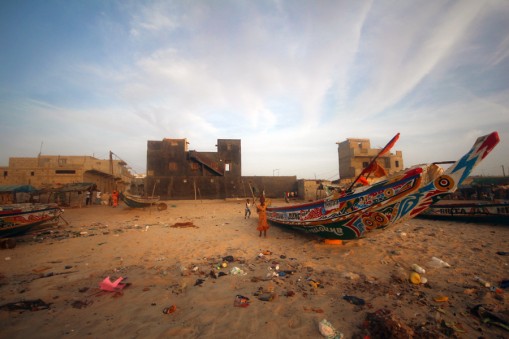 An hour ago I was sitting with my guide taking a coffee in the WAAW courtyard, as he tells me that ‘maybe we can find some magic, anything is always possible’ but what I’m hearing now on this soiled beach is a cold dark reality that the fisherman need to face.

Heading out from WAAW towards the river he explained that once we cross the bridge from the island to the peninsular we’ll not only been crossing neighbourhoods, but ethnic boundaries. ‘all fishermen are Lebou, and all Lebou are fishermen’.

Guet Ndar, the Lebou settlement, is stationed on a landmass jutting down from the Mauritian border, held between the arm of the senegalese river to the east and the turbulent water of the north atlantic to the west, the waters creating the boundary and bounds of the fisherman’s lives.

A sharp left turn after the bridge takes us into the heart of the fisherman’s village. Widely cited as the most densely populated area in the world, my guide informs me that 70% of the population are under ten. The evidence to this fact is immediate – children tumble out of the stone and corrugated metal shacks, flooding the streets with their (creative) games. Their resourcefulness is completely charming, a tightly bound ball of shopping bags becomes a ball, a loop of string thrown over a compadres waist turns the yarn into a pirogue and the street into river. Unfortunately it’s incredibly difficult to observe with any anonymity; as soon as I’m spotted in the street the alarms go up ‘toubab toubab’ (a west african terms for a person of Caucasian decent, ‘whitey’ if you will) and children from all end of the intersections rush in a crush around me. I learn quickly that the biggest threat to my camera equipment isn’t theft, but grubby fingerprints. 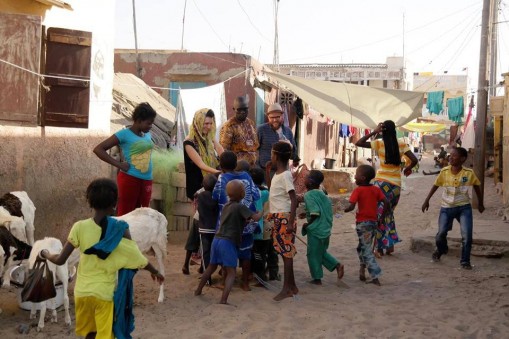 Many draw parallels between Guet Ndar and Calcutta, and talk about this village as a place of destitution, but the impression of poverty is not so simplistic. A glance upward above the crumbling brickwork shows the house  are crowned with television satellites. It’s not unusually for each dwelling to have four LCD televisions, one for each wife, each in her own separate room.

Progress is slow walking through the streets, and my guide looks impatiently back as more children have thronged around my waist. Every child has the look of thrill and daring in their eyes as they shake my hand, grinning at their friends. For a small amount of time ‘touch the toubab’ seems more popular than football.

Once we make it to the beach my guide begins to explain the dark side of life. What you saw there is happy children, but.. the population is growing too fast, the houses can’t handle the extra floors built on top, the land is eroding into the ocean, it won’t be long until their graveyard is washed away, but they won’t move, they won’t move away from their ancestors 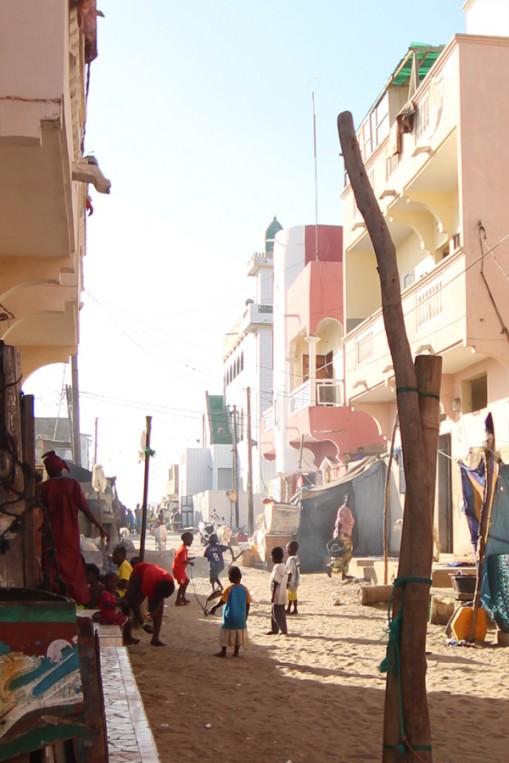 I look past the guides face to see the fisherman coming ashore. As soon as the boat reaches shallow water the boat is swamped by the wives and stripped off all its meat within seconds, leaving the bones of the bare pirogue free to return to the ocean for another catch.

The awful truth is that the water that feeds them is also consuming the land they live on.

However the biggest threat isn’t the world around them but their own bodies, their genetic make up. Their decision to isolate themselves has created a muddy gene pool, and birth defects are becoming increasingly common. Medical professionals have tried to explain the dangers of choosing a partner closely related to them, but instead they believe the children are possessed. They lock them inside, and believe only a powerful charm from a marabout has the ability to heal them.

Seeing illness and reading possession has a thick sticky history, and an even darker present with many vulnerable people continuing to meet a more violent end than these clandestine children. 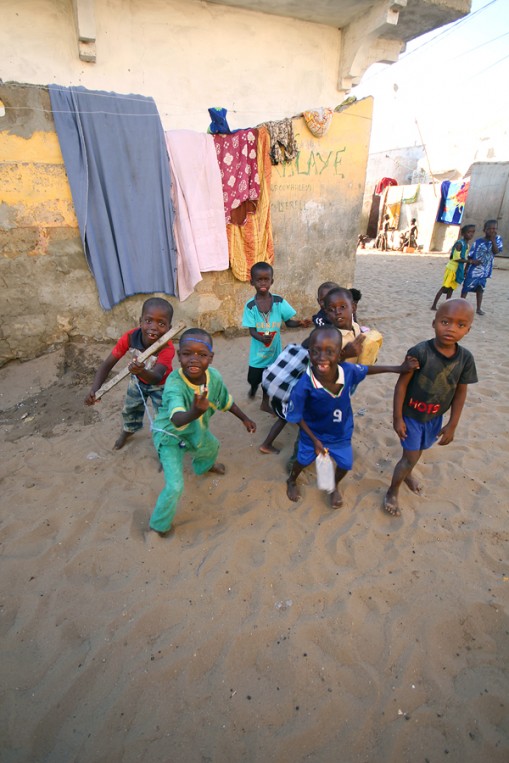 (2nd photograph of myself with the children taken by Petra Hudcova http://petrahudcova.com )