Not a very nice morning drizzly and wet, as I am leaving the house, I realise the shoes I’m wearing are not suitable for muddy woods so I we walk along the beach the tide is out. One of Fred’s favourite things is careering across these sandy flats after lazy seagulls. We saw a black lab who didn’t want to play and that was about it, everybody else inside nice and dry. 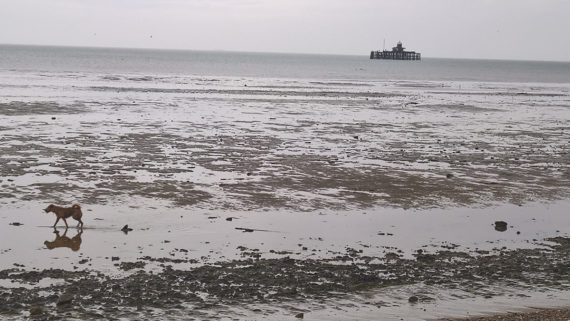 My feet are wet and its all a bit of a chore. I get Fred on his lead and we start to walk up and back through the residential streets. I change my mind at the last minute and take him off the lead again and go back the way we came along the beach. I was enjoying looking at Herne Bay from the sea, its only when the tide is out and you walk along the beach you can see the houses and the beach huts along the water front.

It’s a stony beach and all the water was draining down the slope through the pebbles and spilling out onto the silty sand. At that point between pebbles and sand the water had carved out small rivers on their way to the sea. It was a replica of real rivers in micro scale, leaving the Rocky Mountains and finding a route around obstacles all the way to the sea. Looked at another way a series of marks running off a vertical line put me in mind of Ogham script? Which may have been a coded language used by Druids as an alternative to Latin, or it might have been just an early Irish Language. Something fascinating about this script, with its grouped lines and central spine. The colours of the pebbles were enriched by the water and looked pleasing. 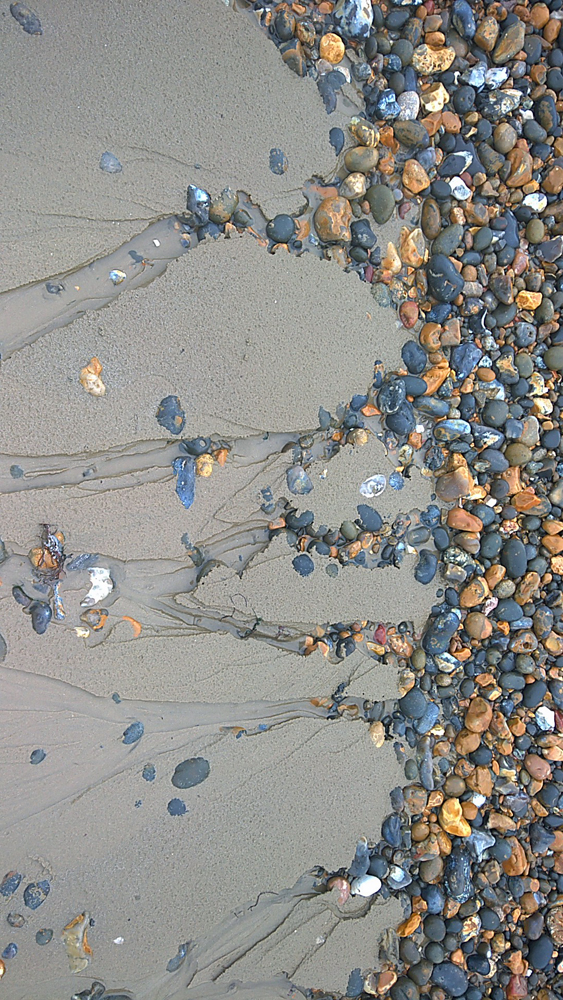 Nearly home now and I notice a black van parked at the kerbside with the number plate WASHTUB …what! Can’t be allowed? Closer inspection reveals WA58TUB with a trick using two round screw head covers strategically placed centrally top and bottom of the 8 to break the curve and appear more like an H. Why do people need to do this I thought? Then the I noticed a black Mercedes or Audi or whatever that was parked on the driveway with the number plate WASHTUB ? Two cars with the same number plate, this was getting silly and why was I even interested in number plates? Such a niche vanity thing. I was beginning to feel resentful that this ridiculous game had got my attention. I had to look again to work out how two cars could possibly have the same number plate?

The big black saloon car was actually WA59TUB and the same screw cover trick applied to the 9 somehow making it read as a H. Is this a conspicuous display of wealth that makes you a terrible person? Or is it like having a tattoo?