I have on top of the cupboard in my studio an old grubby padded bra. I have stuck glass-headed pins into it in a floral pattern on the outside, as if beaded. The points of the pins sticking in towards the invisible breasts of the invisible woman. I bloody hate it. Yet it sits there anyway, reminding me of that which I hate.


To all intents and purposes it might sit among the other bras. Showing some sort of metaphorical link to the work I do… The topics I think about. But to me, it is lazy and false, it has none of the aesthetics of the other pieces. I also think it enables the viewer to be lazy: “oh yeah, pretty on the outside, prickly on the inside, I get it!” There’s no room for them to get in amongst it…one dimensional.
Has aesthetics become a dirty word?
Also, having done an MA I could now, if I so desired, spout bollocks and theory until it fitted. I could crow bar it into the installation with uncomfortable long words… (Like juxtaposition and over-arching arghhhhhhh!!!)

One of my friends recently said to me he just wanted to be left alone to make the work….

A couple of events have been circling around this comment in my head:

Last summer I went to an open studios event along the canal side in South London. There were lots of very “cool” people there… Mingling, drinking expensive red wine, and eating olives…. I digress….. An artist was sat in his studio, having a beer, still painting. He hadn’t “tidied up” or put prices on his paintings. A young woman with roving mic and radio station badges asked him about the “meaning” of his work. He gave her a very old fashioned look, smiled at her and said “that’s up to you, I just make it, what do you think it means?” She was clearly rattled by this and said “it’s very colourful!” He threw his head back and laughed, took another swig from the bottle and carried on painting.

At the Art Party Conference in Scarborough, 2013, I attended a symposium/discussion, whatever… given by artists including Jeremy Deller and Cornelia Parker… Samuel West too I think…
But just one exchange has stayed with me, because it slapped me round the face….
Pavel Bulcher, when asked about art and theory etc said it wasn’t up to him to think about theory, he just made the work, the theory was someone else’s problem.

So this is it then. Having waded through the delights of Deleuze whilst doing my masters, (early blog posts are a testament to my struggles) I have discarded that discourse. That can be someone else’s problem. I have conversations about my work all the time – it’s why I blog… But it’s never about art theory, it is always about dealing with life.

Some might think I’m being lazy here. I’m not. I have done all that thinking, decided what sort of artist I would like to be. This fits with my principles. I shall stick with this until something better challenges it.

I just want to make the work too, my friend. 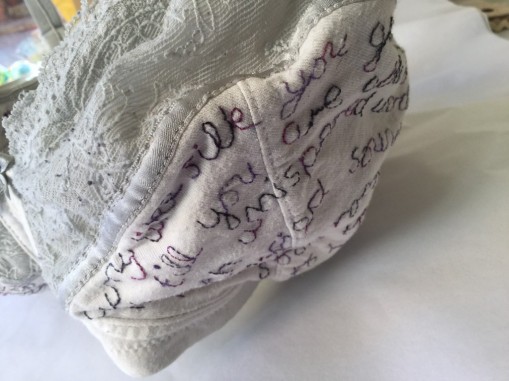