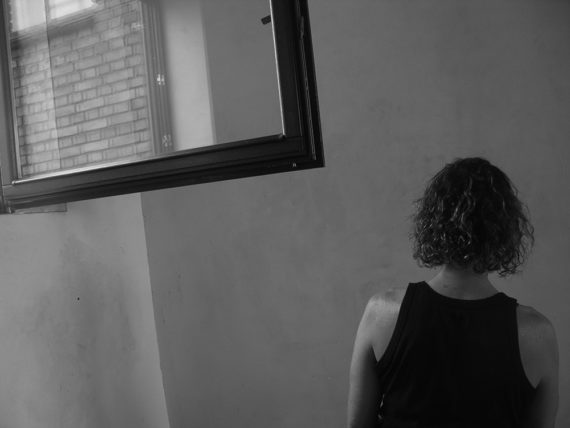 Artist Rob Gawthrop and I worked together in the Dance4 studio for a day to experiment with bringing Rob’s sound ideas and my drawing activities backward behind into the same space of performance.

Rob working with ideas of back, inverted echo, suspended interval.
We talked about time, memory in the sense of recollection,

After an initial time of getting mike stands and me watching and documenting a little, we settled into an interesting length of time with Rob setting up three sound mechanisms while I moved, drew and wrote within the sound that was gradually taking shape in the space. Rob tweaking timers, mikes and objects to get the three ‘stations’ sonically operating together in the way that he wanted.

The afternoon progressed organically, tweaking, tweaking, talking a little and testing by simply doing. With only one day this organic mode of collaborating in the studio-doing was super rich. We were not starting from scratch. We both had our materials – and things kind of worked. As a first studio encounter, very exciting.

and the sound was …. you need to hear it ..needed to be here in the time and space and architecture of its making – with us. 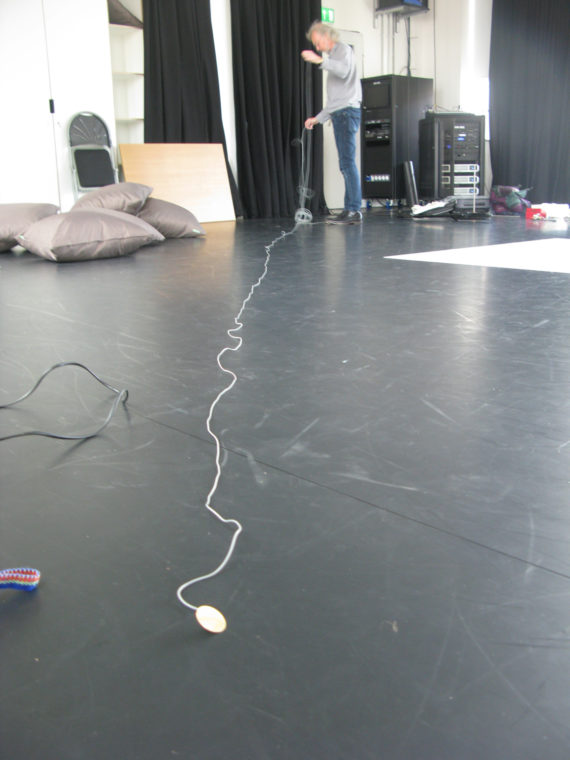 Our exploration continued and opened up to spectators in a Dance4 Sneak Peek sharing. A first sense of what it is like to have an audience witness this still very exploratory stage of development. I sense the need now to compose and to organise the drawing and moving, which in this sharing was an improvisation. To pull out elements and let them be ….come ….

Audiences change the space – the weight, shape and perception of space and time.

How to introduce a work. I had invited them to sit, stand, lie and this needed time, but as performer I was slightly thrown by their decision to sit scattered throughout the space. This work – and my sense of the performance event I am working towards – needs duration.