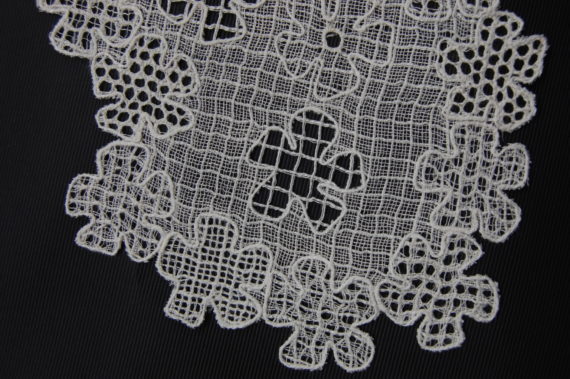 These studio days have enabled me to restore and set up my large floor loom which has been in storage for seven years and to spend some time sampling creative weaving techniques and considering the transference of my new knowledge and skills towards a new body of work and for incorporation into the teaching aspect of my art practice.

It was so good to collect my large floor loom from  storage and get it cleaned up, removing dust and cobwebs and sorting out the ‘sticky’ heddles and rusty bolts.

I also spent time in the first two days researching the set up and patterns that would give me the results that I was interested in achieving.  For sometime I have been interested in grids particularly in the  paintings of Agens Martin and in the structure of antique lace.  At the workshop with Susie Gillespie I had experimented with a grid created using a supplementary warp and was pleased with the results but now wanted to incorporate a grid within the initial loom set-up.  I had seen some samples of honeycomb weave that uses a chequerboard of tabby weave and floats and the incorporation of an occasional heavier weft thread to develop a grid like pattern and I wanted to try this out to see what effects I could achieve.

The next step was to work out the warp for my honeycomb weave sample.  I wanted to sample different sized blocks of honeycomb and worked out the winding pattern for eight blocks each of 4 ends, 6 ends, 8 ends, 10 ends, 12 ends and 14 ends.  These blocks would allow me to weave 4×4, 6×6, 8×8, 10×10, 12×12 and 14×14 and also all of the other combinations of number of warp to weft threads within the 4 to 14 range and eight bocks of each would sample sufficient cloth to fully see the effects created.  I decided to use a 28/2 linen yarn for the selvedges and a 28lea linen singles for the body of the cloth.  This resulted in a warp of 450 ends which took the rest of the day to wind. 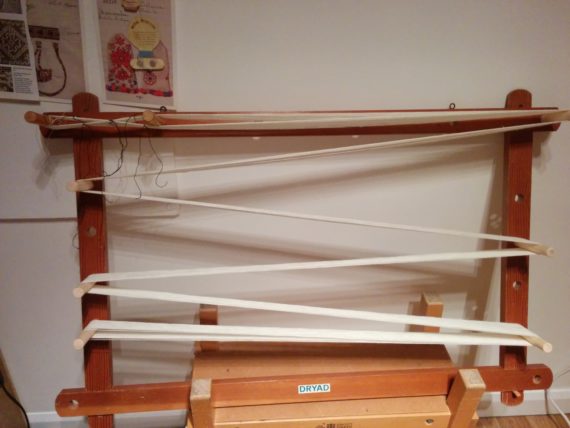 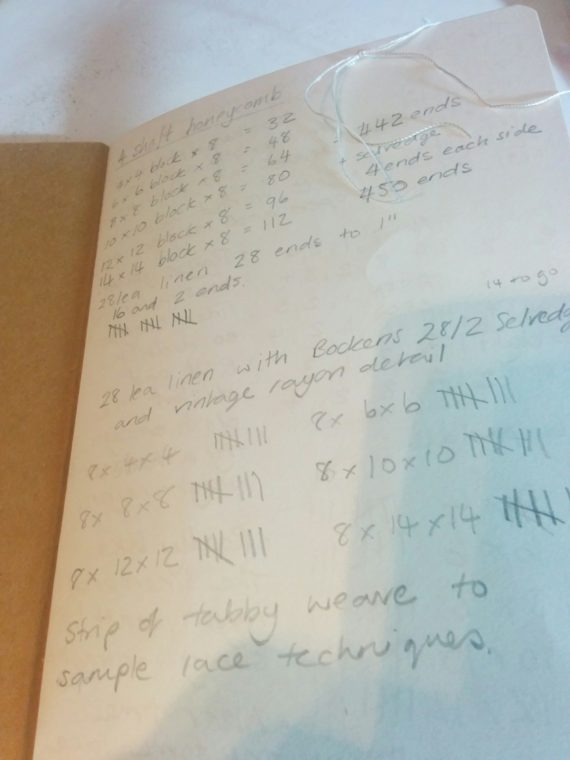 The next step was to dress the loom which took longer than planned, partly because there were 450 ends to sort out but also because I had forgotten that the raddle for this loom is in half inch settings and I had bundled my warp in one inch bundles (the setting for my table loom raddle).  The linen singles yarn also proved to be difficult to seperate and wind onto the back beam because it was slubbly and the fibres knotted easily.  This together with the number of warp ends that I had to replace during weaving because the singles yarn broke easily, has encouraged me to now research suppliers of a fine 2 ply yarn to work with in future.

Once the loom was warped-up I was able to weave a full sample of the honeycomb pattern using the 28lea linen yarn for the weft with the incorporation of a vintage rayon crochet yarn for the heavier thread.  I was very pleased with the resulting cloth and whist weaving and since have been considering how this can be developed further with the incorporation of more of the woven lace and creative hand manipulation techniques that I explored during the weaving workshop with Susie Gillespie. 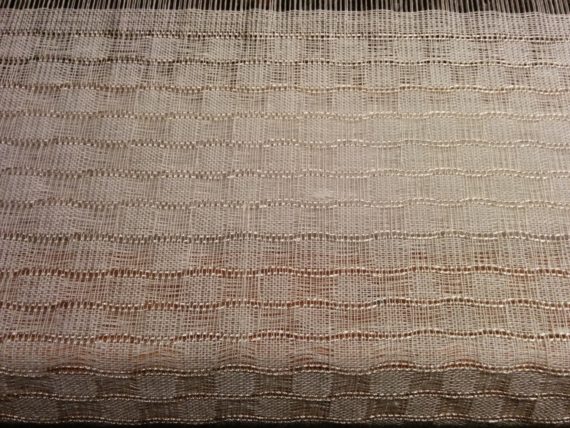 I was disappointed that I wasn’t able to develop more samples during the studio days but setting up the loom took longer than expected and I have learned a lot about suitability of yarns and also about a loom that I haven’t used for sometime.  When I wound the warp and set it up on the loom I made it long enough to complete several samples and, now that it is on the loom it will be much easier for me to use an ‘odd half-hour’ to continue sampling.

I am very excited by the new developments in my weaving practice that have been made possible through the award of the a-n professional development bursary, and I look forward to continuing sampling and then develop some new work for exhibition in 2018/2019.