Well my website is finished and uploaded on to the internet, finally. whoop, I think is the expression.

So moving on from Barthes ‘cardinal’ functions in narrative, the uncertainty aspect is clearly central to the work I am developing, and after reading through passages in a book on aesthetics I notice other moments of uncertainty operate in language.

In discussing metaphor in Aesthetics, Dickie argues around the assertions of Beardsley and his ‘object-comparison’ view, which he refutes, and discusses this in relation to Aristotle and the ‘widely held view . . . metaphor is a disguised simile which makes an implied comparison’. He also discusses an example as an ‘open simile’ in which we are left to work out the context. This later point seems to make more sense on the face of it, than Beardsley’s argument but as Dickie says later, metaphors do not ‘refer’ as such, and therefore if we are to talk clearly about metaphor we should avoid talking about signification on those terms.

What he seems to be alluding to is shifting context as the key and also that the meanings are derived from different origins, which are not definitions. So simile and the object need to stay out of the argument.

From here, in terms of metaphor and also in terms of narrative and cardinal functions, a sense of movement, displacement, uncertainty or deferring operates which creates an expectation or addition to what is expressed. The meanings are not literally evident, but there may be possible available associations. There is something significant concerning this moment of uncertainty.

The most recent piece I made Photoshoot 2, pictured here, suggests the full picture yet hovers in anticipation. Hmm, interestingly moving to a new approach . . .’

The Snapshots photocuts held quite firmly to the genre of family photographs and Un-Fictions cut books interestingly played with what my reading of Ziki describes as a difference between semantic memory and episodic memory, the latter being what you know from your own experience; but the Photoshoot series is different as I have no associations with the images but they do not have cultural associations in the same way. Narrative expectation overrides metaphor in the new work, and I may not be ‘refering’ either, but representation here is taking the viewer somewhere else.

There is something in all this that makes (or may make) sense somehow, and the journey finding out is interesting. 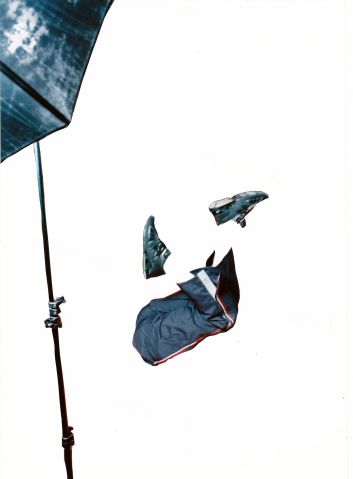 The movement from Snapshots to the new batch of found photographs, the Photoshoots, marked a change in my approach to the photographic image. Here the red-screen ‘arena’ was identified, which set the focus on that area which defined the posed subjects, instead of framing the composition with the outer edges of the photograph; which defined the ‘cropping’ nature of the Snapshot pieces.

This idea of ‘arenas’ where the posing takes place occurred in earlier Snapshots, is generating further ideas, but one image in that set of photocuts has a very different character. The last Photoshoot piece did not so much outline as isolate. This occurred in my earlier photocuts when the focus was more singularly on suspension of closure. Yet in this Photoshoot piece there seems a sense of narrative, although not clearly defining a particular narrative. The isolation of the parts of the subject has moved away from signification and connotations to function differently.

I have been reading an essay called An Introduction to the Structural Analysis of Narrative by Roland Barthes which explores conditions that dispose language to narrative. Barthes distinguishes three levels in narrative work: ‘functions’, ‘actions’ and ‘narration’. He talks about functions as elements that ‘will later come to maturity’ which are distributional. These elements create ‘operations’ as ‘cardinal’ functions ‘that either initiates or resolves an uncertainty’.

I am not sure that we can attribute these principles to my work as a particular narrative is not being sort in the work, but there is an implicit expectation at work. The ‘uncertainty’ is evident and this anticipation has parallels with Barthes discussion of narrative structure in some way. Even as a catalyst for ideas the theory informs the work and this Photoshoot piece is a starting point for further adventures into picture making. 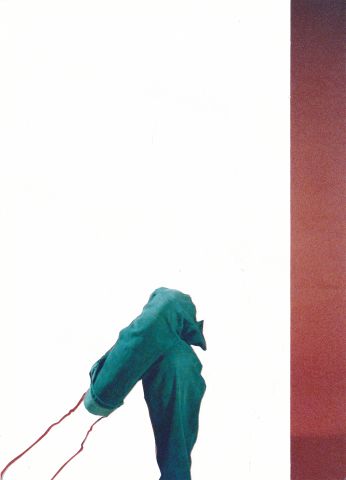