The problem with theory is that the more that is read, the more thoughts, connections and ideas are brought to mind, but then again that is great. And I guess a contradictory statement typical from me to make to start this post.

Some overlap to start with. The Aesthetics book opened discussion about metaphor, which I felt, was not a consistent aspect in my work, but none-the-less interesting. He said in the later section about expression something that occurs in the metaphor section. He distinguishes here between private and public again, in so far as he explains how there is a difference between a persons’ felt emotion and expressed emotion. There are two aspects private and public, and before in the metaphor section it was established that metaphors are public significations, agreed over time by others. And so, this is an aspect in my ‘Snapshots’ work, in that family snaps are private in terms of being personal records (or particular) and yet are public as they follow (universal) conventions agreed over time by others. Then again Ziki discerns two types of memory, episodic and semantic; so we could say that episodic is private or personal in some way, and as for knowledge about the world (the semantic), well that has got to be public as it derives through others. Hmm. . .

So does that lead us anywhere? Well, between reading back over some Rosalind Krauss notes and reading a new book on postmodernism going over Derrida’s différance and deconstruction and so on; and I guess Heidegger’s term ‘language speaks us’, there seems some consistent relation between some of these theories and the work in progress.

Krauss tells us that the ‘index’ and the ‘means of production’ are key to the postmodern work of the seventies and the photograph as index is central; and explains that there is a link back the readymade of Duchamp. This makes sense as I am using photographs particularly because of their index and because they pre-exist my interventions. The work has some grounding in some of these poststructuralist ideas regarding the means of deriving meaning, and so I think the work has to engage in an exploration the relation between individual and collective, so the public and the private are relevant opposites to explore. And this is a relation that come up in different ways the more I read . . . well along with other stuff.

The point is that the ‘Photocuts’ that I have been creating turn the index into symbol, the particular into universal, and therefore the private or personal into the public (i.e. conventions of language) in some way. The nonsense or humour that creeps in is both my playfulness and a means to engage others into the deciphering process. If Krauss fixes the index in the postmodern then my work in progress is not maintaining that approach as I continually move away form or transpose that index. So I am working in relation to these ideas rather than dependant on them.

The latest piece is again hinting at narrative in Barthes terms as in the last blog post, but here in Photoshoot 3 the remains of the photograph pictures signs that could build a context differently to the last piece, in that the arm is a potential ‘actor’ but the gun and shawl add more connotations than a potential part to play later on, and yet still the image hovers unfixed as intended. Perhaps there is something of the ’empty signifier’ in my work, that Krauss also discusses in her essay as she describes Jakobson’s ‘shifter’ in terms like ‘this’. Well, in as far as it does a similar thing, by pointing to a possible reference, context or narrative without fulfilling the whole story. I think I will research this more as this is also interesting. That’s it. 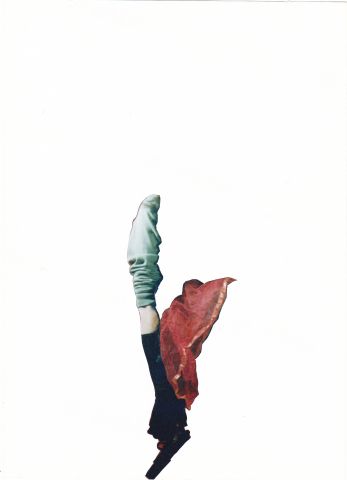