I have been busy with mounting, framing and preparing work for exhibition, as well as producing artwork, though not documenting much. I have work selected for the Suffolk Showcase, Smiths Row in Bury St Edmonds and work also on exhibition in The Foyer, University Campus Suffolk, Ipswich in the Atrium Studios Members exhibition. I met some nice people along the way and also at the Airtime Event at TAP, in Southend earlier this week.

So now back to reflecting on the work. Keeping with the everyday, the traces, and the index, recent work has taken another turn. The Snapshots series took a pre-existing object, the found photograph as a foil for allegory and an index from the everyday investigating representation. The new work takes another item from the everyday as a foil for allegory, the doyley is another tradition steeped in history and associations, and perhaps also an endangered object like the printed snapshot photograph which is in decline. The first of the new series of work is Tracing the Everyday 1, pictured here, a screen print A3 size.

The process of cutting and removal of material is the same as before but the resulting altered form is dispensable. As it is merely the masking to produce the screen print it has fallen into obscurity. It has not been retained or retrieved from its own obscurity, but exists as a copy in the short run of prints. ‘A copy now without an original’ which brings my thoughts back to research on Deleuze and Baudrillard, so it has taken the steps of cut and removal a step further. I printed it with a single colour emphasising the process and the index back to the absent object, which I feel contradicts or denies the image to some extent, or perhaps makes it problematical in as far as we might read into it and yet it obstinately refuses to reveal the connection in any really secure way. I have had some positive feedback already and it seems to function in the intended way as it hovers between ornament and image, mass cultural reference and fine art object.

I am still working on the rest of the series, but have been coming across critical writing that positions the process of making in the Tracing the Everyday screen print series in a place I had not expected. Well not entirely. Ward’s book on postmodernism that I had been reading also explores Warhol’s work because of the low and high culture of mixed processes of painting and print and because of the content in the representation and its abstraction, and the distinction of original and copy. This he situated in relation to Greenberg’s modernism as a departure, or as he puts it a confusion. Hal Foster’s Return to the Real discusses similar issues in Warhol’s work as I have just started reading, and this is all very interesting and revealing. Back to Ward and the connection back to Dada; he states an ‘attempt to reconcile art and everyday life’ exists in Warhol’s work and in postmodernism. I can see that, but I am not convinced that the line of enquiry should be left there, as I think that there are wider considerations and issues here. The origins of the images and the processes involved collect with them contexts within which to read them, and yet also outside of that they create an engagement in the work that is about something else.

I am not quite sure what that means, exactly, but it lies in the area of interpretation and issues of authorship and intertextuality. If my work operates in similar ways, then that makes sense as those are issues I have brought into the work. I like the precarious allusion to distinctions of high and low culture, and clearly I set out to play on that mass/sub culture skull and pattern and pink aesthetic, but I used the method to try to restrain any indulgence in the genre, the process states itself very directly. The work is not to reconcile the art to the everyday, but to bring the trace out from the everyday; and through the use of process and material to interfere with expectations and to push the representation back on the viewer. It both confirms and denies what it is.

I think I better leave it there for now. 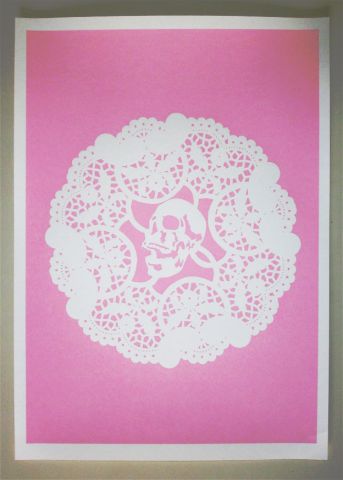