I went downstairs on Saturday morning to find this spread that Lily had laid out that would make any B&B proud – pot of tea, croissants, fruit, yoghurts, jams, mini packs of cereal in a bowl… She went above and beyond! No way could I have eaten all that, but it was very kind of her to give me so much choice. She did me some toast and warmed the croissants and we chatted over breakfast, before walking over to ChapelFM together.

After a coffee and a chat in the reception area, we went upstairs and began. We received an intro into the programme, the team members and the building, and we did some ice-breakery activities so we could learn a little about others who were on the programme and on the UNION team. What a great mix of inspiring people – artists, activists, theatremakers, musicians, writers… everyone is a grafter and a ‘do-er’ and I found it so refreshing!

We walked with some local volunteers over to the LS14 Trust, namely the ‘Small Change Café’ (a name I fell in love with) to meet Howard and his team mates. I was very taken by the space conceptually and aesthetically, let alone the atmosphere within it. 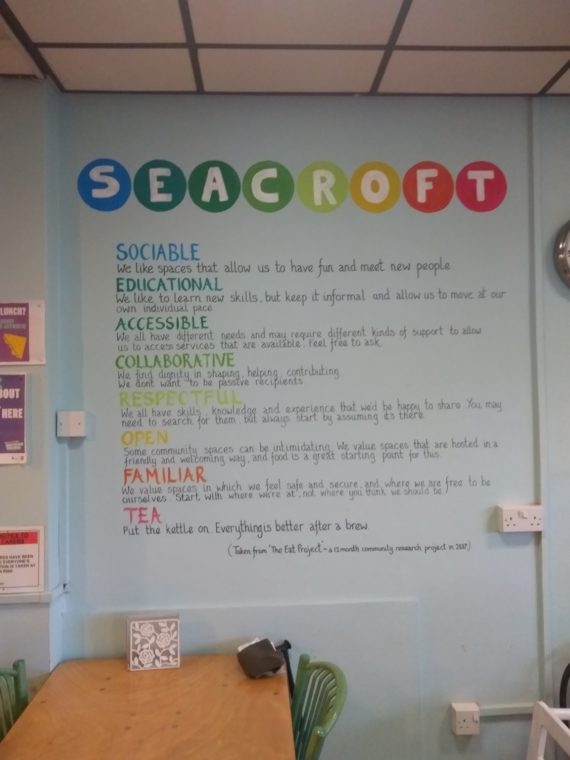 They gave us a tour of the building (including a great little balcony garden with a pizza oven and sensory planter and everything) and served us lunch (that soup and crusty bread was proper nice – thank you very much!). Howard was very engaging and a pleasure to listen to as he spoke to us collectively about the purpose of the Trust, how it works and the impact it has had/is having on the community. I learnt so much and things I thought I knew about were challenged, all in the space of about 20 minutes. I have pages and pages of notes and thoughts. I’d be here all day if I tried to explain everything that was discussed, how it developed my thinking and my ensuing reflections as a result. In short, however, know this; asset-based community development and cross partnership working is the shizzle, community work is ‘slow cooking’ (which ended up being the phrase of the weekend), drink lots of tea with people and that I like the transformational index and values that LS14 work to. That statement is a gross understatement of how much my understanding of things developed/solidified and almost an insult to boil Howards inspiring words down to that, but there we go     :D

My head was swimming with possibility when I did an interview (which will potentially go on the radio) back at ChapelFM. I don’t even remember what I said to be honest – think I was busy digesting information and concepts to give a reasonable interview haha.

The afternoon involved a presentation by Adrian, Co-Director of ChapelFM and UNION team leader, citing examples of and exploring community engagement, and the role of the artist-activist. I found this really interesting and helpful, although I still can’t necessarily pinpoint why. We then divvied ourselves into smaller groups to work on developing an idea that we would implement in the Seacroft community over a ten year period (more on that later).

We were given sketchbooks to use as reflective journals for the duration of the programme. Chris (weekend residency leader) asked us to spend some time reflecting on the following questions…

…but to be honest most of us spent the time decorating our sketchbooks. I know I did – I needed something hands-on to do that didn’t require my already saturated brain!

Dinner soon rolled around (a delicious but spicy curry dish – it was beautiful – thanks!) and we were joined by our hosts (to be fair, I think Lily and David were the only hosts there?) for conversation and good food.
I think a lot of the others went to this bar/music venue(?) for a pint afterwards, which would have been really nice, but I went back with my hosts. They were quite taken with Steve from Beats Bus, a fellow Unionite, so we watched clips of him on Youtube before sitting down to watch The Voice over a cuppa. I played loads with Shadow and I wrote in my reflective journal whilst thoughts were still fresh in my head. My mind was still buzzing when I went to bed so I continued writing for a few more hours.

Thoughts included, in no particular order;