SUNDAY 7 APRIL 2019
Sunday felt like a bit of a blur? The focus of the day was reflecting on who we are as artist-activists (Artivists) and what we need to get to where we want to be. Back at Artlink in the morning, and we spent some time going over and refining the UNION agreements. During that day, we also did an exercise exploring where we sit on the poles of:

I found this exercise quite difficult as different parts of my practice can sit on opposing poles. For example, the work I make for ME (physical art-making) is individual, inner, in the present, rebellious… where the stuff I like to do with people (e.g. Fish, Recovery College, workshops etc) is generally future-orientated, collective and outward looking. Which is fine, of course, but it was difficult to plonk yourself along a line when your practice is so varied.

Now this is where I have written a whole in-depth bit of reflective text but have decided that it’s maybe more suitable for my journal instead of on here – the key points though were that I have become much more risk-averse in recent years (possibly also related to my mental well-being) and that that is something I’m already working on. I seemed to fixate on that point during group work (don’t forget, I was in a hypercritical-of-self negative state) which may have suggested a nature not actually reflective of myself. I’m superorganised but I’m not controlling or unbearably pedantic!

With these thoughts and ideas in mind, we did an activity of working out what we had to offer and what it was we needed:

3 things I have to offer:

Still think I need that one thing. I do suffer from stress and when I’m in a low patch I can get much worse. And I tend to isolate myself. It’s just what depression does. I meditate and my interests (arting, ukulele, reading, writing, gaming etc) chill me out but they’re quite internal activities. I could still do with some more active, ‘external’ spontaneous loosening. I exist very much in my own head – which is a tendency of an overthinker. It’s an existing quest of mine to live in the moment but have things to look forward to. Which includes new experiences. Always. I’ve been fortunate to experience lots of pretty incredible things in my life – I’ll show you my Life List sometime. But the frequency has slowed down in the last 5 years or so (to be fair, a big part of that relates to finances) so that needs to change – but booking a random trip to India has already shook it up a bit!

After making plans to support one another with various things, we were asked to make an image – a selfportrait as an Artivist. In mine, there was something about knowledge and growth and developing myself into a tool for change: 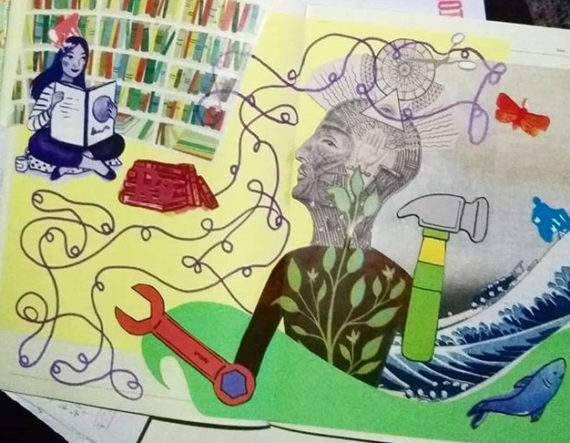 Chris asked us about creating a term for ourselves that summed up ourselves as an Artivist – his was cool: Mystic Revolutionary. In my irrational mindset however, I found this difficult as I kept going straight for negative adjectives and verbs. I have been thinking on this since though, and the one I have sort of settled on is: Restless Conspirator. Restless because I can’t stay still, I have to always move forward, be proactive, improve the situation (and because I exist on a cocktail of anxiety and frustration!)… and Conspirator because I notice that I get people onside before plotting/collaborating with them to think up better ways of doing things, and then often lead by example in tactfully shaking the boat a bit. I’m not naturally a rule breaker but I am one for challenging the status quo. I think my process involves seeking to change hearts and minds with compassion, reason and lived experience before proving my point with direct, pacifist, creative and effective demonstrations of my argument. As opposed to the anarchic distruptor that most people probably picture when thinking of ‘activist’.

I could do with being a little more anarchic, to be fair . But the term ‘anarchy’ seems to no longer simply mean ‘leaderlessness’ but instead implies anger at any authority, which when stirred by the excitement of protest, can lead to unnecessarily violence But this anger runs the risk of pissing people off and harming your cause if not thought through and/or executed appropriately. How can you make change if you piss off everyone and get the backs up of the people you’re trying to win over? I’ve seen too many worthwhile causes and campaigns get backlash and lose support because of this, or through the invitation of negative spin. Also, in my experience, once walls are built and opinions formed, it is all the harder to bring back down as no-one likes to admit they’re wrong. I’m all for disruption (I goad people on Twitter occasionally – what a rebel) but I think in my day-to-day I hold a bit more of a Sun Tzo approach to activism.

“The supreme art of war is to subdue the enemy without fighting.”
“If you know the enemy and know yourself, you need not fear the result of a hundred battles. If you know yourself but not the enemy, for every victory gained you will also suffer a defeat. If you know neither the enemy nor yourself, you will succumb in every battle.”
“Supreme excellence consists of breaking the enemy’s resistance without fighting.”
“The greatest victory is that which requires no battle.”
“To know your Enemy, you must become your Enemy.”

Sun Tzo. What a baws. It was a really interesting way to reflect on the self as an Artivist, although it raised more questions than answered them!

There were things in the Sunday outline that would have been really helpful to have had the time to explore, especially in the mind I was in. About self-care, identifying the next ‘threshold’ in our journeys and exploring the fear and doubt about moving forward. Perhaps that was explored in some ways through the sharing of skills and ideas and thinking about what we needed support with. Dunno!

The end of the day saw us planning the next weekend, which would be in July. Would appear to be in Manchester. After that Fri/Sat/Sun there, I will be travelling to London on the Sunday night to start my fortnight-long Royal Drawing School Summer Programme, which is being funded through my Emergence Bursary. I’m gonna be knackered!

Despite how I felt during and around the time of the weekend residency in Hull, I genuinely had a good time. I loved seeing everyone again, and folks felt much more comfortable in each others presence. The whole programme is brilliant and I love the company of my fellow artivists. Us lot are gonna change the world, you know.