The exhibition build is nearly complete in the foyer and gallery. I’ve decided, in conjunction with my tutors, to concentrate my exhibition work on the recent project I completed at Wells next the sea. To this end I added two more small oils to the six already completed. Then I made one slightly larger image in Acrylic for speed…. 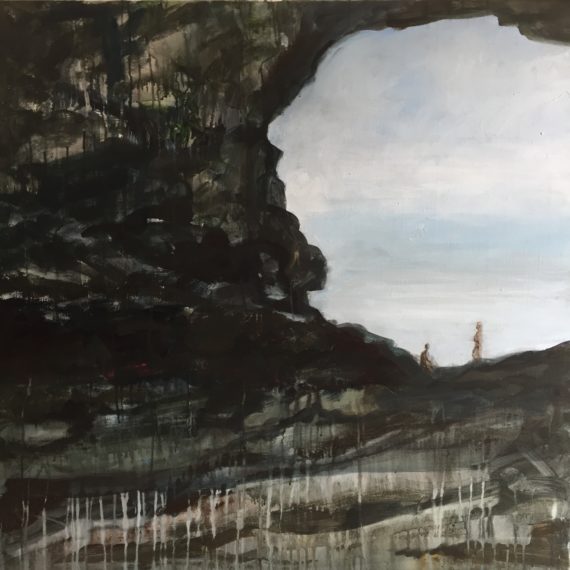 An image conjured up from my memory of the Cornwall residency. Used an old canvas with roughly similar colour palette to the one I wanted, then I let the paint run and expose deeper layers of colour. This was reminiscent of the deep layers of rocks and minerals as they become exposed by the sea along the coast in Cornwall. The image morphed into a cave with two figures dwarfed by the magnificence and wildness of the landscape.

I managed to stop while I was ahead for once. I think the urgency of the moment had something to do with it. But I also think I’m becoming more at one with the subject matter and general direction of my practice. My work is now more gestural but I must be aware of the danger of slipping back into figurative mode. This happened when I painted three images of dancers after the much freer large acrylic on paper. These will not figure in the exhibition even though they did contribute to an advancement of my work. There is a need to keep reviewing what I do . There is no time to backtrack now I’ve arrived at a way forward in my paintings.

Well with just two weeks to go till assessment and the Exhibition it really is urgent. We’re lucky enough here at Suffolk Uni to have great working spaces now that the BA students are away. A few of us have taken over the top floor of the art block and there’s never been such frantic activity. It’s so good to have the constant company of like-minded people around to share an informal crit., chat and general support. Yesterday a couple of tutors dropped in too so quite a sociable day.

But what about the ‘work’??? Well personally it’s going well at the moment. This large underwater image on loose canvas was a bit of an afterthought following on from my ‘Leap of Faith’ painting. 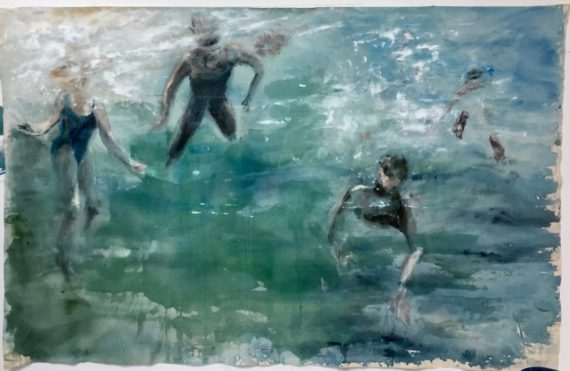 The ballet dancers I’d started weren’t going well so as light relief I started this large canvas and it just took off. Thoroughly enjoyed doing it which proves the value of advice from a friend to paint what I love most. My work is becoming more and more gestural in style, I think.

I returned to the dancers and made them much looser. They had become really uptight and far too figurative. The one below is about complete now. 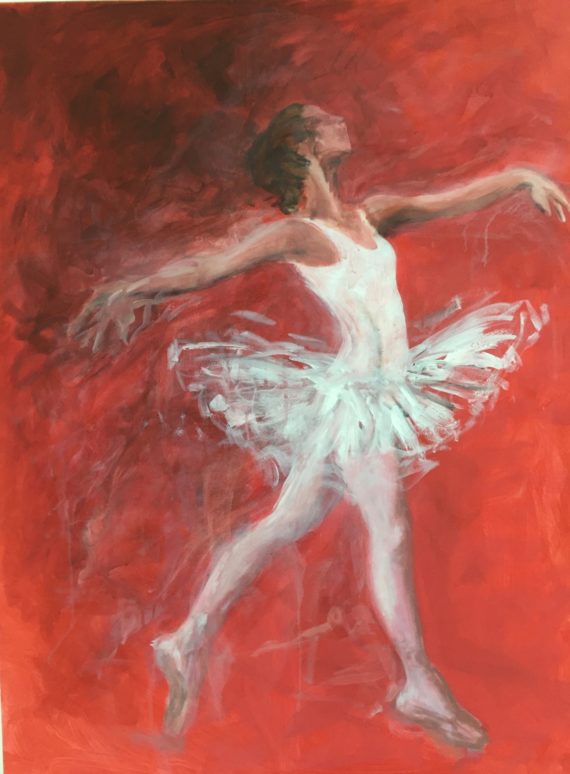 But this next one is proving difficult. I’m not aiming for complete anatomical accuracy. The movement is more important to capture yet I find it impossible to maintain the integrity of the painting without starting from a well-drawn pose. Once I establish that I can then abstract and add a sense of what I feel about a subject. Hopefully this will be sensed by the viewer who can interpret the completed image by imposing their own personal reaction to what they see. 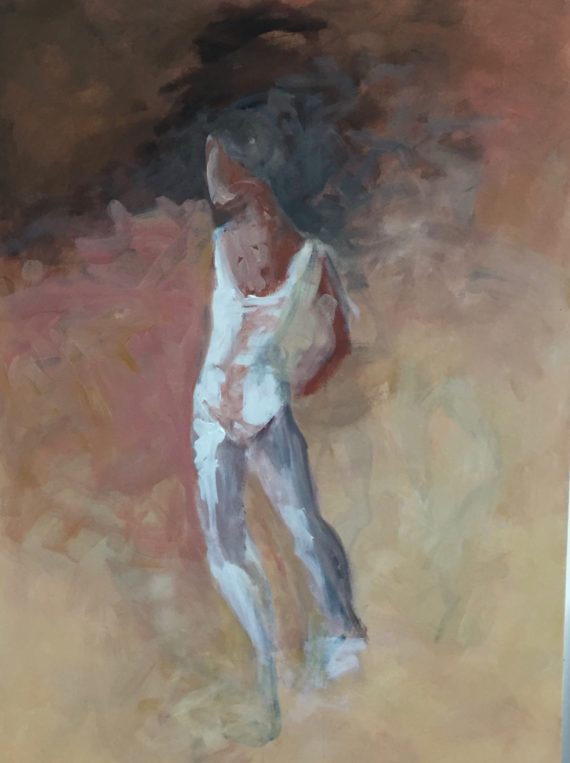 This has a way to go still but I hope it’s getting closer. The human figure is firmly back on my radar of what to paint now. I was stuck on landscapes for the last few years but have well and truly returned to my love of figure-drawing. The wisdom of the quote I mentioned a few blogs back rings so true ….’you always return to the things you are trying to avoid but you come back stronger’.

Decisions have to be made about what goes into the exhibition next week. I’ve managed to complete most of the written work now and must  think carefully about what I need to say in my Viva. How do you sum up two years  of research and thinking about a subject? It has been such a fantastic and at times, excruciatingly difficult and challenging experience but one which has had a profound effect on my art practice. I’ve also made some very good friends in the process. I was told at the beginning that it would be life-changing and it has been.

It’s 3am and can’t sleep. Mind buzzing with ideas so got up to draw in case I forget on waking. Suddenly after nearly 3 years everything’s starting to make perfect sense. So much to do in just 4 weeks – all that’s left of my MA course. 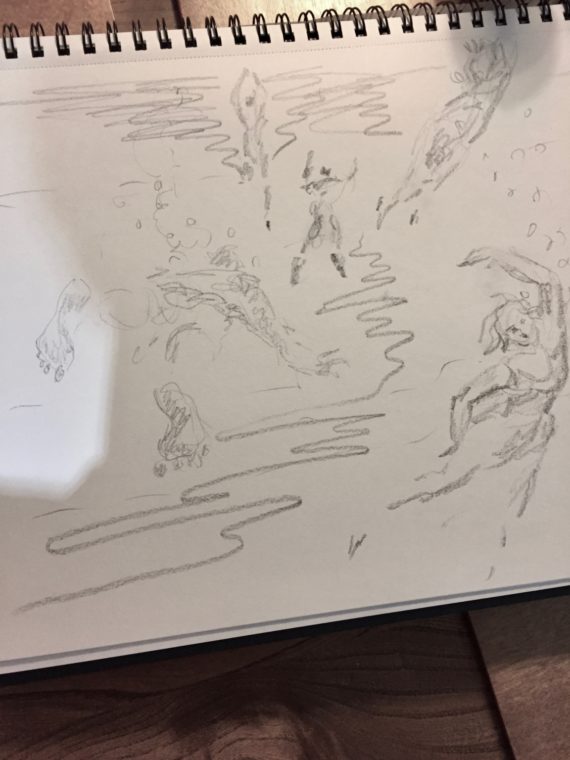 Quickly sketched out this, my latest idea. I poured mostly blue paint onto a roughly 3 metre by 1.7 metre canvas on the floor the other day. It was intended to be a screen onto which I was planning to project a video film. But this plan was abandoned in favour of using a large TV monitor enabling me to avoid setting up in a dark space. This way I can hang paintings based on stills from the video. See next images – all works in progress

So ? What to do with the huge canvas? This is where my nocturnal idea kicked in. Thinking about my swimmer image which introduces my blog I suddenly decided that I’d create a large swimmers painting onto the big blue canvas and then I can hang that too rather than pin it to the wall or stretch it onto a frame. I think the large paintings will look better floating a few inches from the wall and will have subtle movement to enhance the images. Worth a try anyway. I’ve seen enough images as I swim underwater to remember the lovely fluid shape people make when freed from gravity. These memories plus my ingrained knowledge of the figure in motion drawn endlessly on the recent course at The Royal School of Drawing will be enough to create the scene making sure it doesn’t become too figurative. The painting will be chiefly about movement but with the added interest of being movement in a different element – water. I want to express the ‘otherness’ of the watery environment. 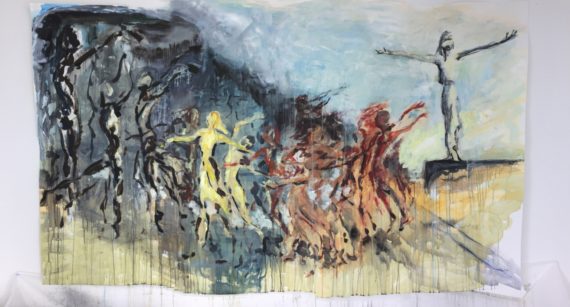 Then there’s this. I keep thinking it’s finished yet every time I go in to the studio space I add a bit more to it. I’m calling it  ‘Leap of faith’ because that’s what it was. I had no idea where it would take me – just wanted to paint figures. Then it kind of grew each day and took on a life of it’s own. Deciding how to display it has been worrying me. Then at about 2.30 am I knew. I’m going to suspend it ….somehow? about 6 inches away from the wall and let it flutter gently.It’s on nice thick, strong paper but has distorted a bit with the watery acrylic paint but it should flutter quite well.  I think that will increase the sense of movement which is what it’s about mainly. If that works I’ll try to treat the big swimming painting in the same way, although that will be on heavier canvas so we’ll see what happens. Either way I want it to stay as unstretched raw canvas not framed or constricted at all. Decisions, decisions???

The shoot at Wells over, I now have the task of working out how best to use the footage. My embryonic editing skills are being severely tested but with the help of a technician at UoS I’m getting there. The shot here encapsulates the day for me. Walking across the empty intertidal sandbanks towards an endless blue sky.

I didn’t fully understand why I chose to wear this dress over my swimsuit, but on reflection I think it was prompted by learning about the Haptic a few years ago. That dress held some important memories of walking along beaches in Australia and the Cook Islands back in the 90’s. It was a pivotal time in my life (I was surprised and delighted it still fits!) I’m not a natural hoarder but for some reason I’d kept the dress…..now I know why. It was perfect both emotionally and artistically. Wearing it catapulted me back in time and I felt the euphoria of freedom from my former life all over again as I sank into the water and floated free from the land and events which had made me so sad in a distant part of my life. 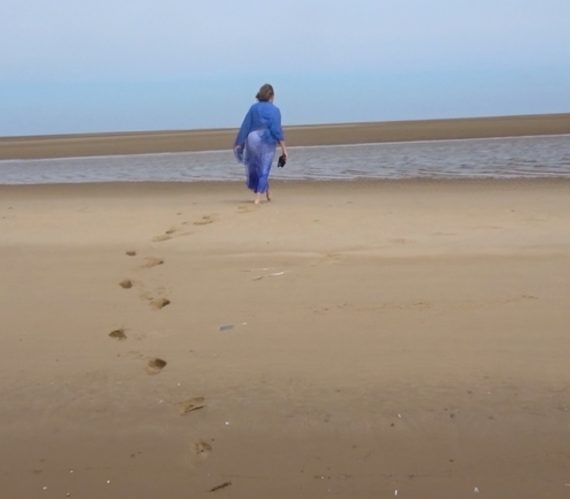 The next picture is one of a series of stills taken from the video. I didn’t know how to do this until my tutor Emily Richardson showed me. The stills will be catalysts for abstract paintings which chime with much of my work on movement. The behaviour of the fabric underwater is beautiful and even the colour resonates with something deep inside me. I shall enjoy making a series of oil-paintings using these as a starting-point. I have a vague plan to display them next to a video loop of the underwater footage I shot with my new toy – a GoPro camera which I’m sure will become addictive – great fun to use. 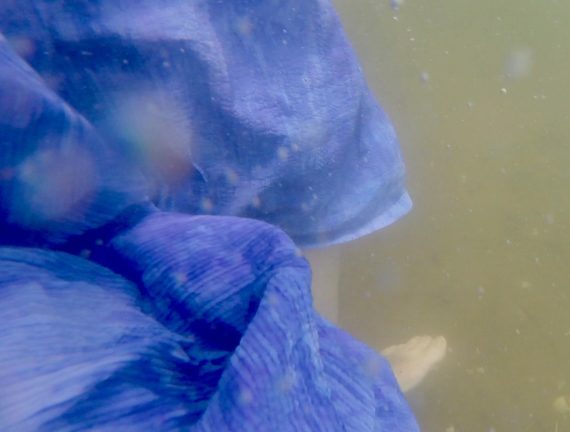 Final preparations are in full swing for the MA assessment and exhibition and it’s becoming totally manic. So much to do and we all feel that suddenly, what I thought, might never happen, things are becoming clearer; links are forming and it’s exciting. I’d like at least another 6 months to achieve the ideas in my head. It’s inevitably the way. Pressure really focuses your ambition.

Follow this link to see more about Simon Faithfull’s work at Wells next the sea . Quite fascinating!

I’m excited to be attempting a video piece to add to my Fine Art MA exhibition. I’m primarily a painter but after an inspiring visit to the Paint Symposium and in particular, a talk by Glenn Brown, I feel inspired to broaden my scope and try new technologies.

Researching Simon Faithfull’s work at Wells next-the-sea was a further spur to my ambition, especially as my friend , Ceri, with whom I completed my BA lives at Wells and is almost as excited as me to help with the filming.

The plan is to shoot masses of footage both above and underwater and then the difficult task of editing will, I hope, result in a short film which I may project onto a very large painting or if it’s good enough, it will be a stand alone addition to my practice.

This photo taken at Richard Long’s exhibition at Houghton Hall is another source of inspiration. I’m looking again at Bill Viola’s work too. 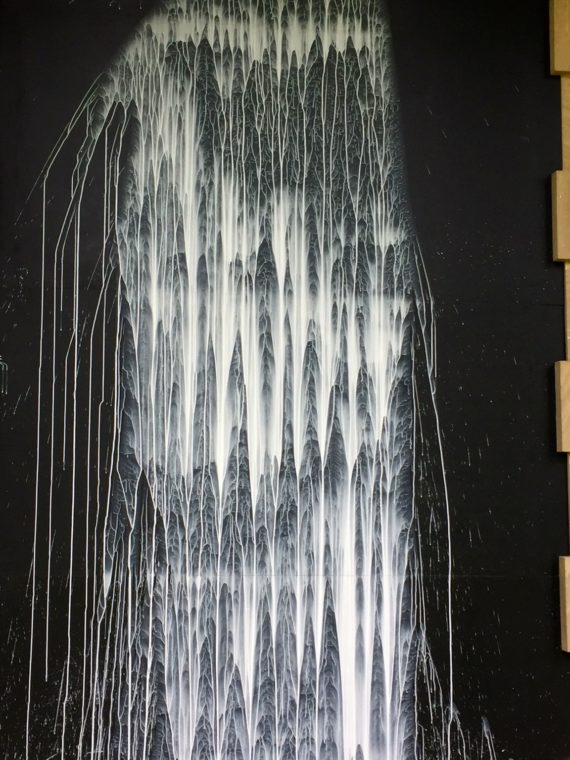