Just begun a new painting about a childhood memory of holidays in Portland, Dorset. I found a tiny black and white photo of myself, my brother and mum at a place called Church Ope Cove in Dorset. I remember so clearly paddling that day at the beautiful spot. My arm is in plaster so I couldn’t swim. It’s a very bad photo and so I copied it to the computer and slightly improved the definition. Weirdly , you can see through the figure of my brother, the faint outlines of the rocks. It’s almost as though he’s transparent. Quite disturbing as he’s now dead. He’s also hanging back as  if a little afraid of the water. 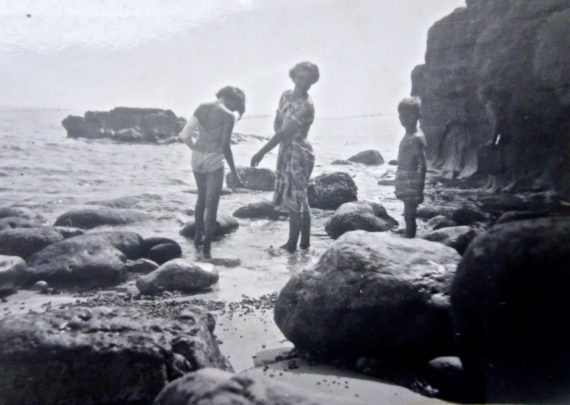 I actually wanted to capture the poignancy of the image as it is slightly sad remembering the pleasure of that holiday so long ago. So the transparency of his figure might be a useful thing to include.

As usual I began quite figuratively but intend to abstract the image slowly. I think it has more power to arrest the viewers attention and make them think and put their own interpretation on the image.

I’m also planning to stay at Portland in April for 4 days to paint the actual place as I don’t like working from photos. It will be interesting to do that alongside my ‘memory’ painting. I’m thinking this might be the start of a series about the coast which I can use for my final MA module.