Through rain and then light rain we drove for an hour, arriving at Woolstone in the Vale of the White Horse at around half past eleven in the morning. We parked and had a coffee at the White Horse pub before heading out of the village in a south westerly direction, through fields and over stiles, while we chatted about how flat Oxfordshire was, and how unnerved we were by the sound of gunshots in the distance.

Andrew grew up in Keswick in the Lake District, but didn’t stick around for long after leaving school, and has since lived in cities including Edinburgh, London, and Bristol where he now lives with his wife, Katie, and (I think) one cat, though the cat (or non-cat) didn’t come up in conversation.

We traversed balding fields whose straw-like stumps and the occasional de-kernelled corncob gave away their erstwhile purpose. As we crossed a boundary road into a field edged by a narrow wood, four deer emerged, racing across the green, stopping to have a look back at us before disappearing over the horizon, never to be seen again. We both enjoyed the experience via the cameras on our phones. As we circumnavigated the pasture we stopped to eat one of Andrew’s chicken thighs – I was expecting Morrison’s rotisserie, but he had roasted them himself, with chilli sauce between the skin and the meat. As we tucked in I spotted the source of the gunshots high on the brow of Woolstone Hill to the south. I asked Andrew whether he thought we were in the cross-hairs yet and we picked up the pace.

We passed through a few fields with horses in and I repeated what Derek had told me on the Pennine Way this summer – just let them know you’re there and that you’re not a threat. I did this by talking to each horse as if I were negotiating with a gunman in a holdup situation, ‘IT’S ALRIGHT. IT’S OKAY. I AM NOT A THREAT TO YOU. WE’RE JUST PASSING THROUGH. EVERYBODY BE COOL’ etc until the horse eventually realised I was not bringing it any food and turned away with a blast of nostril air and a casual saunter back to where it had been standing when we arrived. Its favourite part of the field, I suppose.

At Compton Beauchamp – which I suggested may be pronounced ‘Beecham’ like the 1990s Oxford United footballer, Joey Beauchamp, whom had stuck in my memory as being the player that was sold to West Ham United, only to never kick a ball competitively before being sold on to Swindon, and then back to Oxford before the season was out (It turned out his love for his home county prevented him from making a go of it anywhere else). 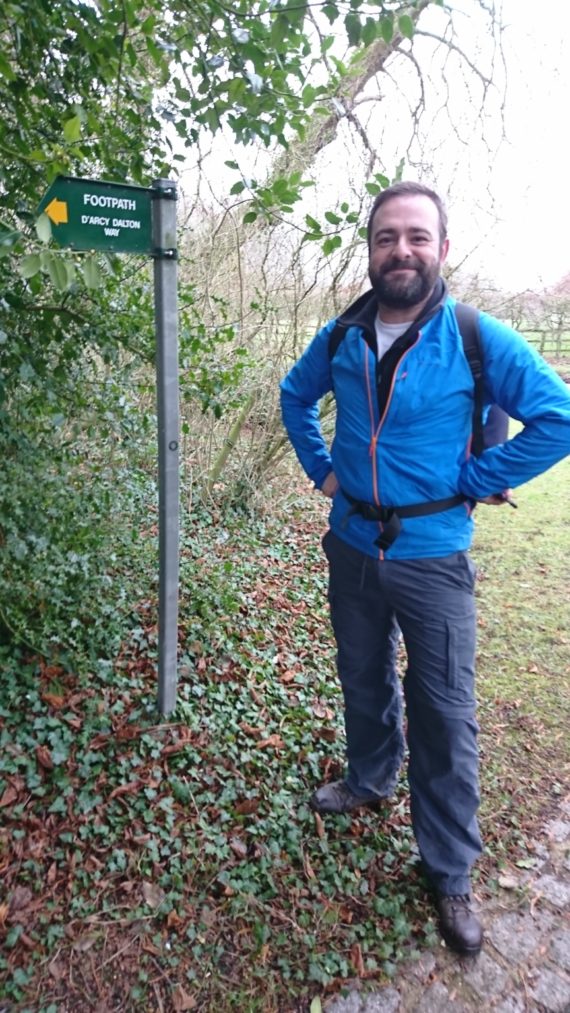 We followed the D’Arcy Dalton Way, a 66 mile trail named after D’Arcy Dalton, an ardent 1920’s rambler responsible for preserving many rights of way in Oxfordshire, through more corn fields and pastures until we arrived at a crossing with The Ridgeway. We were one hour into our walk and this crossing point marked the centre of the figure eight route that I had plotted on the map, and the location at which we must decide whether to continue on our designated route or to snip off half of it and take a left turn towards Wayland’s Smithy and White Horse Hill. We’d had some rain in our faces but had been largely sheltered as we passed through small fields lined by hedges and farm buildings, and so the weather hadn’t been a problem. We’d navigated some very muddy corners of fields and spent a few minutes watching a Red Kite holding its position on the updraft. It was five past one, an hour since we had left, and Andrew estimated another three hours walking, assuming each quarter of the figure eight represented a quarter of the overall distance walked. He wouldn’t be too far out, by the end of the day, as it happened. He expressed concern over finishing our walk in the dark, and I mentioned that I had my headtorch with me (pure coincidence, I had left it in my bag by mistake) but that I didn’t think we’d need it as we would doubtless motor through the two sections of the walk that took us along the Ridgeway National Trail as they were on flat gravel paths. Turning left at this point felt a bit like heading back, and we had only been walking for an hour, so I suggested we push on and do the whole route. Besides, I hadn’t yet told him my story about the time I silenced the entire studios on my foundation course with my story about three things that are true about all men. Fifteen years later I’ve learnt that they aren’t universally true anyway, and that all I was doing was passing on an ignorant man’s so-called wisdom. Either way, the content is way too graphic to report here. I hadn’t planned to bring it up, but the conversation went down the route of being of a certain age and understanding what’s appropriate.

Up to this point, discussion had centred around us both having moved away from the north, and how that affected our relationships with our family and friends. We also covered more directly personal subjects, to do with home life and work, and a little bit about art.

The second quarter of our figure eight walk began with us chewing up The Ridgeway, its gravel path disappearing beneath us as we raced towards our left turn into more open country. We talked about our formative years, and the events or feelings that had led each of us to leave our homelands in search of something else, but as the whistling wind blasted us with sideways rain our words were getting lost in the chill December air. We donned our gloves, hats, and hoods, and nipped into Hailey Wood. The coppiced trees of Hailey and Middle Woods broke up the wind and for a short while we walked in silence before conversation turned to parenting, and the current issues in my own home, where I lived in perfect harmony with my wife for fifteen years before we gained two flatmates, now aged six and four. As we reached the centre of the woods it appeared we were on a grand avenue, in one direction the gap between the trees stretched as far as we could see, and in the other; Ashdown House. One of the many reminders of the enormous privilege that surrounds us when we walk through the county of Oxfordshire. Humbly, we shuffled on through the wood and out the other side, where we ate a chocolate and coconut flapjack each, and followed a path leading up to Weathercock Hill, Here we re-joined our route, having sliced off probably half a mile of it by going through the woods. We were now in the middle of an enormous expanse of open farmland – the floor was lined with seedlings of who knows what. It looked grassy, but Andrew wasn’t convinced. The path was faint, and as our boots gathered cakes of earth – the extra weight around my boots took me back to cutting across farmers’ fields on the way home from middle school in the late 80s – we wondered how much it cost the farmer to have this right of way running through his livelihood. A small portion of his income, we decided, but enough that he knows exactly how much. We were approaching the centre of the figure eight from the other side, and we discussed the age difference between ourselves and our younger course-mates (hence the discussion that led to what’s appropriate subject matter when some coursemates are close to half your age. We never mentioned the age difference between us and our older course-mates. Perhaps a signifier of how less age seems to matter, the more of it you have behind you. Andrew celebrated a late emergence of thicker chest hair than before, only to then lament it’s almost instant greying. Comes to us all, I suppose.

At the edge of the field we laughed at the nonsense of it all as we banged the mud from our boots and I took paracetamol and ibuprofen together, for fear of the niggle in my hip developing into genuine pain.

We turned right, along the gravel path of the Ridgeway National Trail once more, and were immediately upon Wayland’s Smithy, the ancient long-barrow associated with Wayland, god of the forge. I told Andrew about the Amesbury Archer, a Neolithic man buried with more grave goods than any of his contemporaries, and with metals yet to be discovered in British archeology. The man had travelled from the Swiss alps to Stonehenge, where he will have arrived with precious metals the like of which had never been seen and also, perhaps, the knowledge with which to remove these metals from stone. Magic. He had a withered thigh bone, and would have walked with a limp. Jump forward a few thousand years and in all of the Western European pre-christian religions the god of the forge, the smith-god, walks with a limp. It seems obvious to me that the Amesbury Archer was this god – he was certainly buried as a god – perhaps even worshipped in his own lifetime as one. It’s one of my favourite stories, and I was glad to share it with Andrew, along with my idea for an art project based around this man being the nearest thing that I – an atheist with the name Smith – have to a god in my life!

Moving on, we re-joined the path and saw White Horse Hill ahead of us. Somewhere on the other side of it we would see the white horse that had motivated Andrew’s choice of location, and that spurred us on. We decided not to stop and heat up the Moroccan Lentil soup that I had carried all day, and instead we ate chocolate as we walked.

Once on top of the hill we remarked on the enormous earthworks that surrounded us – they turned out to be Uffington Castle, an Iron Age Hillfort – before moving on, eager to discover the day’s main event.

We arrived at the Uffington White Horse from above, and its shape was revealed, piecemeal, as we topped the hill and descended around it – I stepped onto it at one point, and was overcome with guilt, so jumped off again, leaving evidence of my trespass in the form of white footprints in the grass for a few yards.

Around here we talked only about the landscape. The manicured base of the valley, the uniform gulleys running down the side of the hill – Giant’s Stair, as it is known – that we couldn’t imagine having been formed by nature alone, and Dragon’s Hill, the natural mound with its top cut off and, if you believe the legend, site of Saint George’s most famous deed.

From here it was a slippery walk back down to the valley below – overtaking a couple with their big dog and their tiny baby – where we met the road back into Woolstone and The White Horse pub, who were no longer serving food. We had snacked our way through an eleven mile walk and I, for one, was starving. Snickers, Scampi Fries (golden rule: if you see them, buy them), and a pint of coke had to suffice. I had carried my soup, stove, and gas, for nothing, thought he weather hadn’t really allowed for an opportunity to stop and sit, so for that all is forgiven. It was daylight when we reached the pub though, I think that’s worth noting. I took care of my calorie deficiency once home and showered, as I reflected on the first of what I hope will become many Walks with Other Artists.