2 Comments
Viewing single post of blog We know what we are, but know not what we may be

The Degree Show is fast approaching, and its time to stop and think about how and what we are going to display and where. I have made up four canvases that are about 5ft high. On these I am going to paint my female nudes. The idea I have to display them is to fix them onto brackets that extend them out from the wall at an angle so they are leaning down. This effect will compel the audience to look up at these muscular women. Thus creating power and status to the image. The figure dominating male or female viewers that gaze upon them.

Jenny Saville did something similar to this idea in one of her works Prop-1993. This monumental work depicts a unflattering image of a female nude that has been propped on a stool looking down at the audience. Forcing the viewer to look up at this unconventional woman, giving the subject the control, and to dominate the audience. 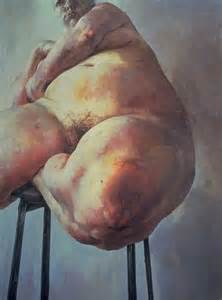