I have started to think more about my hybrids and specimens more in depth, as while I enjoy drawing them I want to start to explore them more fully. One example of this is how they reproduce. Spores instantly sprung to mind for me, as they can seem quite alien in many ways. Their definition is also interesting, and links in with ideas I’ve been mulling over:

– A small, usually single-celled reproductive body that is resistant to adverse environmental conditions and is capable of growing into a new organism, produced especially by certain fungi, algae, protozoans, and non seed bearing plants such as mosses and ferns.

I decided to start drawing what one of the potential spores may look like and how they may start to mature into a new organism. 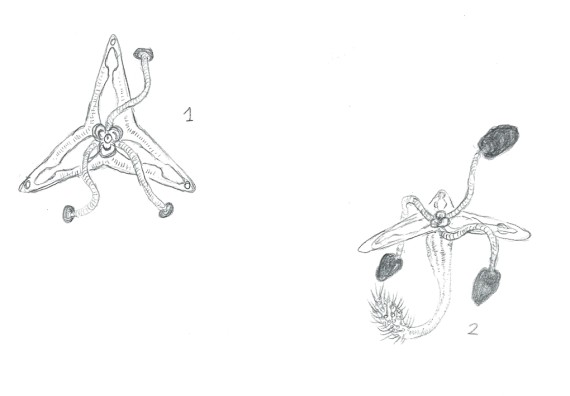 With this drawing, I decided to explore the spore before and after it started to become a new organism. I thought about how it may change as it starts to grow and mature, would the tentacle-like parts eventually become a fungus? Would the bulb underneath sprout roots? Would this organism need roots to survive, or has it adapted to another method of securing itself and gathering nutrients? I’m not too sure what this organism will look like when it has reached maturity, but it will be an interesting process in figuring it out.

I’ve posted snippets of a few of these drawings here before, but I thought I’d post them all together now that I’ve taken quality scans of them! These are some of the drawings I’ve been working on for my project, I’ve really enjoyed it so far! I love the process of selecting different forms that I like, and grafting them together into these strange specimens. I know that there is a lot of scope to expand this project even further, to get a context behind it that relates to current events, but forenow I am enjoying the process. I like to think about the specimens themselves more than the meaning behind the work so far, and ask myself questions about them. Why do they look the way they do? What adaptations do they have to survive in their habitat? What habitat are these specimens from? How do they reproduce? I’m beginning to see these specimens from a different perspective; it’s as if I’m a Naturalist out in the field, and I’ve encountered these otherworldly organisms for the first time. I need to document them, examine and study them in an to attempt to understand them, like the Victorian Naturalists who embarked on outrageous journeys to discover new flora and fauna.

While this was a little while ago now, I still want to post about it on my blog! Marking the midway point of my residency, I had a window exhibition at the gallery from November 16th to 23rd. My plans had to change a lot due to several unforeseen circumstances, which were very frustrating!

The dangers of ordering materials online is that you may not always get what you payed for, as I found out. I ordered a roll of tracing paper, and I was planning on creating both drawings on tracing paper as I felt it would work really well against the pine door in the window, and the spotlights. What I thought was a 10 metre roll turned out to be about 5, so not only was I mis-sold and paid for something I didn’t receive, I only had enough to make one drawing, and didn’t know until I tried to roll the paper out to start my second drawing two days before my install day. A nightmare! There sadly wasn’t enough time to order more with it falling on a weekend, and nowhere near me sells rolls of tracing paper so there was no way for me to and drive to get some either.

In the end, I had to compromise and create the second drawing on a roll of paper that I already had, and draw it on the day of the install (I planned on doing this anyway, but added problems mean it took a lot longer). The roll of paper was a lot wider than the tracing paper, so I had to trim the paper down to size to match the tracing paper sheet, and because it was on a roll I had to cut it all by hand using a scalpel and a small cutting mat on the floor. Time consuming and tedious, but it had to be done to ensure they worked together when hanging in the window. The paper was also very heavy, so my smaller bulldog clips wouldn’t hold the paper at all when it was hanging in the window space, but luckily the gallery had some large clips to hand which held it a lot more securely.

However, once they were installed and hanging in the window, it was worth all of the effort! While I wish they were both drawn on tracing paper, I think it still worked well and how I wanted them to, and sometimes you have to make unforeseen changes in your original plans. I learnt a lot from this, that will definitely help in the run up to my solo exhibition in January. They were also quite difficult to photograph, reflections from the window during the day completely blocked out the drawings in the photographs, and the spotlights blurred out the top section of the drawing on the left during the night.

I was very lucky in that I was able to attend the talk given by artist Mat Collishaw at New Art Gallery Walsall in November. I booked it early and I’m glad I did now, as there was a massive waiting list and it seemed to sell out very quickly! Sadly I didn’t have much time to look around the whole of the show, but managed to see his sculptural flower pieces which were of particular interest to me, considering my interests within my own work!

It was fascinating listen to him talk about the work, I scribbled down lots of notes frantically while he talked, trying not to miss anything important! These are some of the notes from my notebook about his flower sculptures:

Against Nature by Joris-Karl Huysmans

Fed up of idealised images of flowers, cosmetic adaptation, flowers are quite sexual and predatory, only want to spread their seed.

Some of his thoughts about plants, particularly flowers, were really interesting to hear as you usually don’t hear people discussing them from his perspective. It also really connected with how I’ve been thinking about my own hybrids, as quite dangerous and predatory in their aesthetic and how they may behave and survive if they were real plants.

I haven’t updated in a while, it’s been a hectic month and a half! During that time I managed to visit the natural history stores at the Potteries museum and Art Gallery and examine some of the specimens there. It would be so easy to lose days looking through all of the specimens they have there!

It was really fascinating to be able to get a close look at them, I mainly chose to focus on insects during this visit, and hope to visit again in the future to look at their pressed plant collections. I created some drawings from the specimens I was examining while there and also took many photographs. I’ve placed a few on this post as an example of some of what I looked at.

I am a fine artist who uses drawing and sculpture within my practice to examine the conventions of botanical and scientific illustration and how they impact our notions of classification and taxonomy. I create work around the concept of a precarious nature, one that cannot easily be classified or contained. www.jennanaylor.com