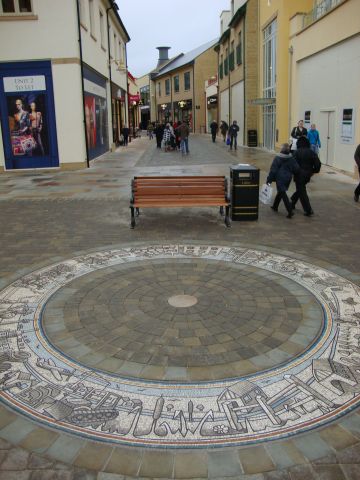 I have to depict the history of a town. This was my proposal and it was accepted.

Suddenly then; history has become a real thing, not just a word on a piece of paper that represents….well er just …stuff. I am left wondering now what value history has in our communities or society in more general terms, outside of acedemic study.

Is Video and art on the Internet the Future?

This is a walk around my mosaic depicting the history of Witney.

I dont even profess to be a video artist. But I wanted to make a sound track to go with this video. Like many things I never found the time. But I do have a video.

Is video and downloadable art the future, part of the post post modern era I feel we are crossing a threshold into.

A walk around my mosaic depicting the history of Witney.

I arranged to go and see this mosaic again and meet the arts development officer for lunch. I wanted to take photos of the mosaic in a finished context.

When I got to the mosaic there were two middle aged women standing on it. They reminded me of ‘Patsey’ in Ab Fab, kind of professional shoppers with lunch at Harvey Nick’s darling.

They were pointing at the images and talking to each other. I heard one say ‘and look there’s a shepherd over there’. They were pooling their knowladge together and trying to understand what they looking at. I really wanted a photo of them, so I walked past them and stood away to the side in the corner. My army surplus cammoflage jacket I was wearing did not hide me into my suroundings, which I thought they were designed to do? As I started to take my camera out of it’s little case they got wind and scarpered.

Anyway….over a free lunch I learned everything had gone very well while I was in Crete and images, council websites, plaques, films and stuff all hunkey dorey. But the best storey was about one of the councilors who had been on the steering commitee for this project, not just the art but the whole shops, houses, play ground, cinema car park thing. He was almost anti art and paid little attention to it. His views were, art was a hobby and had no place in the world of economics and commerce. No place in the public realm, and had very vocally played down its role, and made it a little difficult for council officers to make agreements and commitments to the commissioned artworks etc.

This counciler apparently walked into the arts development officers office and said, he had changed his mind about art and had got it now. And he could see what it could do.

This must have been quite thing for him to do as he had been very forthright in all the meetings I had gone to. So for me a a great ending.

I was emailed this photo from the arts development officer at W.Oxfordshire District Council today. It shows probably the next prime minister being shown my mosaic in Witney town centre.

There are two pieces of public art in this new development and I hope that DC MP could see public spending on the arts, within capital projects like this was a beneficial thing. I hope he could see the high impact the arts have on the cohesion of a community like this. Well any community come to that.

I wonder if the tories will obolish this kind of public spending, dismissing it as frivolass, unproductive and irrelovant? I expect we’ll be paying for health insurance and many other public services. Is art a public service that has to go.

Bit of rhetorical one that. 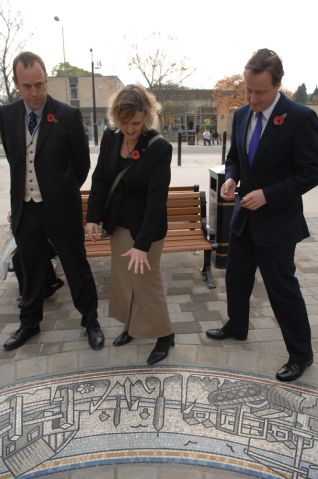 Invitation to the opening of Marriots Walk.

In the heart of Witney.

Join us at the official opening of Marriots Walk by the Rt. Hon D. Cameron MP.

Followed by a drinks reception at Cineworld.

(this is a film about the construction of the new town centre including interviews with the artists involved with the public art).

I will be on holiday with my family on the Island of Crete. Exploring historic sites, walking through dramatic mountains and gorges etc etc.

I will have to visit Witney again after the celebrations and take some photos of my mosaic in the finished development when I get back.

A full on making experience.

A duel with sods law

and an army of construction workers watching to see what art is and what was all the fuss about that needed protection from the rain.

As for the arena, it was not ready, it arrived a day late and the builders could not release enough man power to errect it. Combat took place in the open air. It did not rain. The whole site complex is cordened off from the public and it was a hi viz, hard hat, steel toe at all times set up.

Sods law bowled me a few googlies, like the mosaic did’nt fit the hole made for it, and the screed was rather sandy. The whole working area was actually like working on a sandy beach. But generally speaking it went very well.

In fact I have really enjoyed the builders, they were very keen to see what art is? I am really pleased I was’nt tying ribbons in trees or something cos they would have had very strong views on that. But they were all very complimentary and I can honestly say I did not recieve one negative comment. Jaws dropped when I explained the time and process required. They totally got the whole craft thing and wanted to know how it was done. They wanted explanations as to what they were seeing or what the narrative was. They went on to make a protective cover for the mosaic, so I figured they were as proud of it as I was. They were fun and I enjoyed their company.

I think construction workers are probably good indicators for the views of the general public on matters ‘art’.

History you see, it is the mortar which glues people and communities together!