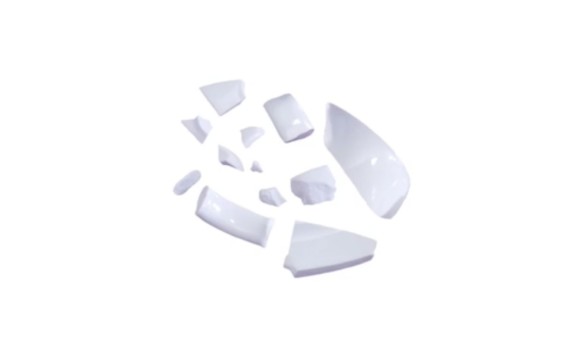 My practice is deeply rooted in material and archival research, pulling together fragments of information from multiple sources, both factual and fictional. Over the last 18 months I have been applying this process to ceramic artefacts, examining their history and social attributes.

I first came across the Wheal Martyn museum [the UK’s only china clay museum] whilst researching the porcelain industry during a residency in Swansea.  If you’ve ever read anything about the porcelain industry in the UK you’ll know that it was full of rivalries, bankruptcy and the pursuit for material perfection. Collectors earned themselves the title of ‘china-maniacs’ obsessed with objects formed from this ‘white gold’.

I’m fascinated by the legacy of this enduring material, it’s in our paper, toothpaste, electronics, paint, its even used by NASA.

Between 4th – 7th July  I’ll be visiting the clay pits at St Austell to meet with the Wheal Martyn Museum and the China Clay History Society. This first trip is being supported through a travel bursary from a-n.

There’s a series of videos from British Pathe that show this incredible landscape [watch from about 3 mins in & you’ll see why they’re nicknamed the cornish alps]. 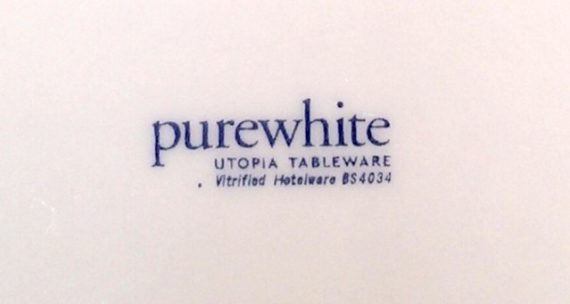 Its been a week since I visited St Austell and I’m still sifting through all the information that I gathered there, books, films, images. On my last day after breakfast I noticed the stamp on the bottom of my plate – Pure White Utopia Tableware – which seemed a very apt end to my stay there. I had been staying at the Eden project YHA, the site of a former kaolin mine transformed into a public centre championing sustainability and biodiversity.

I’m excited to share my experiences with my peers back in Cardiff and there’s an opportunity to join at Pecha Kucha event later in the summer, which I think would be a good platform at this early stage in the project. The contacts I made whilst in St Austell at Wheal Martyn and the archives are keen to support a longer period of research so with their support my task now is to find further funding to return as a resident artist in 2016/17.

I’ve been speaking to so many people I decide to use my last day to walk around the clay trail again, there are a few offshoots from the path that I’m told can get me in closer. I need this time to think and look back at the information I already have. The archivists gave me lots of literature, images and films to take back with me. There is this great magazine with a picture of a hand holding a fresh lump of unrefined kaolin from the pits, it looks like some kind of poultice not at all like rock. 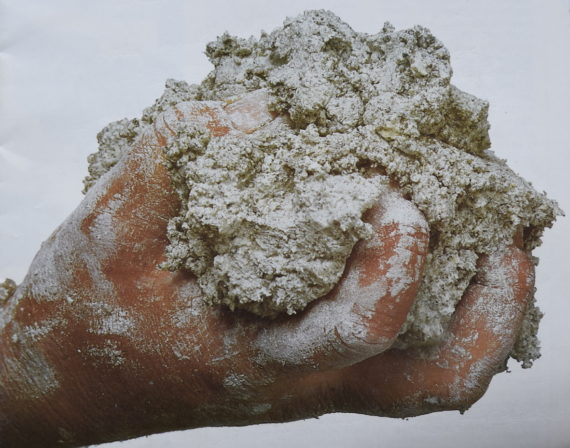 It gets me back to thinking of why I first came to St Austell, to see this raw material and landscape first hand, to physically get to the stuff that I had been reading so much about and that these men – Cooksworthy, Billingsley, Wedgewood – had obsessed over. Material pioneers who lusted after the purest and finest material to form into object that would outlast their lives and countless others.

The mines look like another world, unlike anywhere I’ve seen before. What must of it have been like to witness the changing of this green and verdant landscape to one of white mountains and valleys of dust. They have been used on many occasions for filming, Malcolm told me that they filmed some the BBC Hitchhiker’s Guide to the Galaxy here – a show I have fond memories of watching with my dad and sister years ago. This could as well be another planet, there is nobody else around and I get to spend hours under the sun wandering up and around these earthly pits.

The Ceramic History Society archives are not quite where you would expect them, in a building shared by Imerys (the company that currently operates the working mines) staff gym on the site of a disused pit. There are rooms upon rooms of document, images, maps and memories. All of the volunteers archivists I met today are former / current employees or have some affiliation with Imerys and are very generous with their knowledge and time.

I spend hours in the archive talking to various people, looking at photographs and trying to get an idea of what specifically I’m looking for – there is so much here. My main interest is in the social history and culture that developed around this industry. How did the people of these white dusty mountains live their lives? There were bands and choirs for almost every village who competed with each other for generations after generations. I can’t stop thinking about breathing, I’ve read about silicosis and the damage done to lungs by tiny particles of rock, porcelain coated alveoli. They must of had strong lungs working in that dust to bellow out in brass and tune.

There are a few of the pits that dealt purely with producing kaolin for the ceramics / potting industry. I want to know if there were many potteries that sprang up around Cornwall, around the source, if any of the employees made anything with this ‘white rock’. I ask but nobody seems to know much, this is an area outside the mines. There must be some way of finding out more. Truro museum and Falmouth are suggested, there’s also a PhD student at Exeter I’m told I should meet. The archive are keen for me to come back for a longer period and tour me round the area, there are more local historians they’d like me to meet, their enthusiasm is overwhelming. Where do I stop and when does the research take over the work, I need to keep a clear head and not get too distracted, but I think another trip would offer so much more.

One of the volunteers at the archive also volunteers at the Wheal Martyn Museum and kindly offers me a lift back there. I want to take another look at the mine here and see if I can get round some of the back routes to get a closer look. On the way back to the museum we stop at Blackpool, another pit that has been decommissioned. This one I’m told extends a further 120ft under the water that was pumped in to flood the mine. It looks like idyllic, like a lagoon. I’m told there’s plans to turn it into a water park. 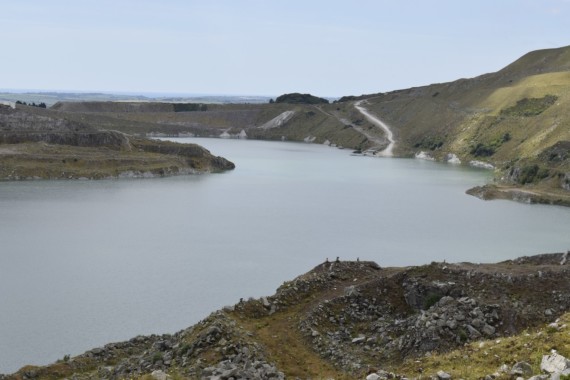 I’ve arranged to meet with another archivist Malcolm Gould later this afternoon, he works mostly with film and also leads some history tours. We talk for quite a while about the relationship between Cornwall and South-Wales, of clay, coal and dust. He tries to teach me a few Cornish words but I keep forgetting them, da I know is the same as in the Welsh – good. Another volunteer, Richard, is with us and we keep talking about the villages that used to be here but were swallowed up by the expansion of the pit. All the houses were owned by the company and the people were staff so were moved on when more of this precious ‘white rock’ was needed. Malcolm offers me some clay and rushes off, returning a few minutes later, his hands covered in white dust, with two bags. One has samples of kaolinised granite and the other pure kaolin after processing, the latter lumps are silky white and smooth to the touch, they melt away in your fingers. I feel like I’ve just been given a goody bag at the end a birthday party, these lumps of rock make me ridiculously happy. 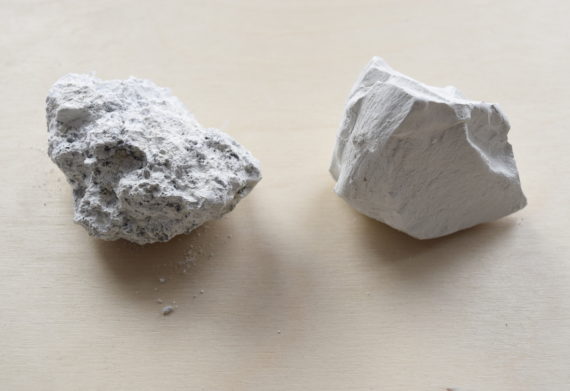 I took the trail from Eden around Carclaze and over to Wheal Martyn, this trail skirts round three pits Carclaze, Baal and the mica dams. The ‘sky’ tip sits above Carclaze and can be seen from Baal and Mica – though not marked on the trail map. The route rises up out of the woods to what appears like a lunar landscape, grey and bright, with pools of turquoise water gathered in the belly of the pit. 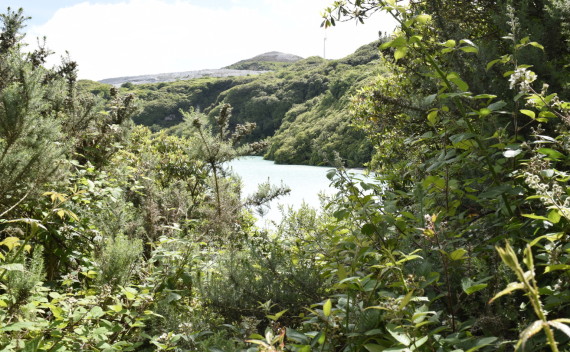 Curving round the pits I’m eventually led across Cookworthy’s bridge (William Cookworthy was the first man to discover porcelain in the UK) to the Wheal Martyn Museum. It’s gone 11 and my meeting with Jo Moore (the museum curator) isn’t till 2pm so I take my time exploring the museum’s collection and grounds. There’s an interactive exhibition starring an aged Cooksworthy as our introductory host leading to a room filled with tools, models and information panels. I’m interested in the ‘bal maidens’, whom I’ve come across before. They look to be the main female presence in the mines, cleaning and processing the dried clay, appearing in photographs dressed in white aprons and drooping bonnets.

The exhibition winds round the room and out into the grounds where the remains of a Victorian china clay works is preserved. There’s the drags and settling tanks where mica particles float in water and are refined. Between them sits the bluing house where dye is added to produce the purest white clay. The site is vast and I follow signs up to the viewing platform overlooking the ‘Superpit’ (Imery’s current working pit). Trucks and diggers work their way slowly round grey tracks carved into the ground, I can’t get close enough. 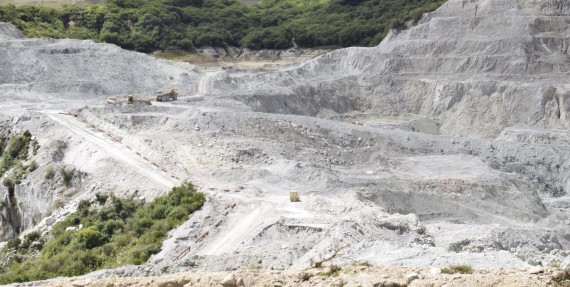 I meet Jo and we speak about ‘White Rock’, the museum and the future. She tells me about the museum’s plans to build a new gallery space, of the Clayworks project, and we speak about how we could maybe work together, whether there’s any space for me to carry out a residency later in the year or when the new building is complete. We’re both keen to pursue this and agreed to speak further via email. There are some exciting prospects and it seems like this visit could be the first of many.

I’ve arranged to meet with the China Clay History Society tomorrow at their archives and Jo tells me that Ivor will have more of an idea where I can get greater access to the pits. Many of the CCHS are ex-pit-workers so I’m hoping I will get more of an insight to the area and its working history through them.