I’ve been trying to make a revised version of my film since the New Year using new footage shot, but with no success. On the point of abandoning the project as a lost cause, three ideas suddenly free things up. I find these inspiring pieces of work by Kathleen Herbert and Antoine Cordet and a conversation with a friend reminds me of another piece of work I saw in the summer by Yuri Pattison.

A shift in mind-set, seemingly subtle, but crucial to me; I’m making a collage NOT a film, even if I am using film techniques!

Simplify, so restrict things to a few techniques – cropping, simplification of colours, unexpected transitions. The footage falls into natural groups – landscape, architecture, speeding colours – and it feels apt to use different techniques for each to emphasise their specific characteristics. This new approach feels rather like painting – with the computer rather than a brush!

I realise it’s essential to organise the footage well – invaluable when you need to find something later.

Now I’m at the point where I have my clips and know the approaches I want to use. But arranging the material into a final cut is another thing. What seems to work is reflecting on the next possible move before making a decision and actioning it in Adobe Premier. The process feels more like a considered game of chess than a race to get to the finishing line, but something interesting does seem to be emerging. 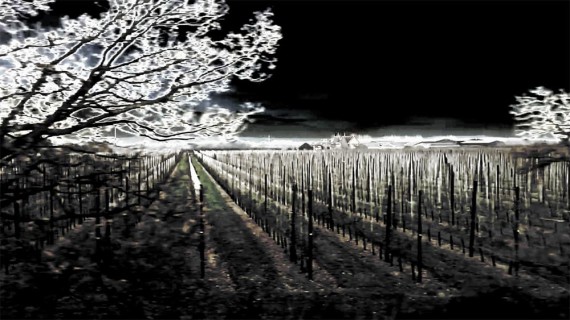 Longer term, I think the film footage can be used to make real, physical collages that condense multiple shots into a single picture, perhaps taking inspiration from Cordet to obscure sections of the image with paint before drawing in new definitions.

There is a discontinuity between me as spectator-traveller and the space of the landscape I journey through that stops me seeing sites as places or from being fully present in them, even when I try tactics to bridge the gap.

I’ve surveyed my entire journey and am now focusing on seven places that feel important. I don’t know the names of these places, their purpose, or even precisely where they are. I could find out but I don’t want to – it seems irrelevant. Failing to name them has some benefit; it blocks the law of the ‘Other’ from gaining entry, impeding their drift towards non-place. I feel them as a kind of abstraction; a construction largely of my own imagination to be recorded, documented, captured, and visually explored.

Rather than making a film of the journey as a whole, I’m going to focus on a site at a time, using each to explore different characteristics of film, image or the mobile phone camera.

The train creates dual movement – the physical momentum of my own body during the journey and also the parallel motion of the landscape rushing past. I catch views in partial glimpses – a series of snapshots piled hurriedly into my memory – which are re-composed in the account I later give of them. Augé suggests such re-telling tends to lean towards ‘prophetic evocations of spaces in which neither identity, nor relations, nor history really make any sense; spaces in which solitude is experienced as an overburdening or emptying of individuality, in which only the movement of the fleeting images enables the observer to hypothesize the existence of a past and glimpse the possibility of a future.’

I am confronted with a landscape I ‘ought to contemplate, cannot avoid contemplating’ and I derive ‘a rare and sometimes melancholy pleasure’ from my awareness of this responsibility.

The train is an ideal vantage point from which to see. It offers movement but maintains distance – separation. The landscape vanishes; ‘soon it is only a shadow, a rumour, a noise. This abolition of place is also the consummation of the journey, the traveller’s last pose’.