Back in February, when my head was full of several nebulous beginnings of projects, I made a series of notebooks in which to gather people’s stories. 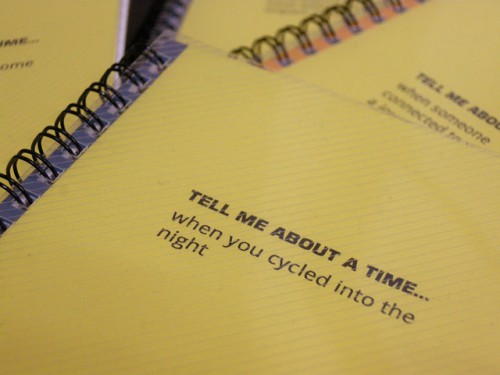 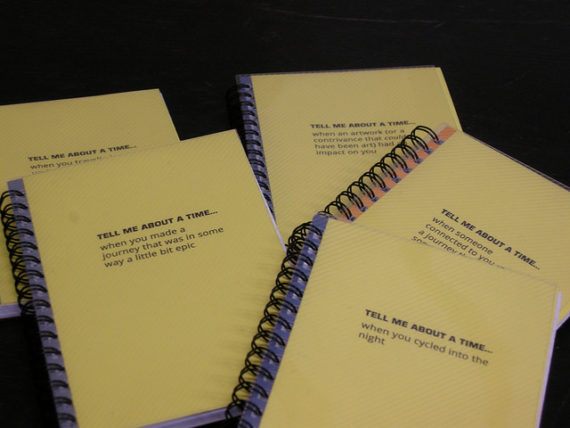 Most of the books were to help catalyse my thinking around what was to become the project ‘Orrery for Landscape, Sinew and Serendipity‘, but there was one there that had this research in mind:

Tell me about a time when an artwork (or a contrivance that could have been an artwork) had an impact on you.

I wanted to hear from other people about the things that had had an impact on them. Part of this is learning about how others define impact, as well as hearing about the types of things that have caused that impact.

I opened the notebook – as I did for each in the series – with an example from my own experience. Here I told of a day-trip to London when I was studying for my A-levels, and my encounter with an installation in a squat in Mile End.

I think this was my first encounter with installation art, so probably what set me off on the track that led to what I do now.

Here are some really distilled versions of what the other contributors shared:

Surprise >> tears >> feeling a part of something >> feeling welcome and needed

A painting by Picasso

Theatre in a small village hall >> close-up and personal >> powerful >> smell, touch and taste the drama

a painting at Birmingham Museum and Art Gallery

It’s heartwarming to see examples of how artworks had meaningful effects on people. And effects that were then applied out to wider contexts – they weren’t just contained in Art World, but entered everyday life too.

I think there’s a certain amount of filtering going on because of the notebook format – only impacts that had a lasting effect after the encounter are remembered to be written down – so I’m curious about short-term impacts as well.

Do you think it’s possible to design for impacts like these, or are they so unique and unpredictable that that would be an impossible task?

Should the strategy instead be to expose people to as many artworks (or contrivances that could be artworks) as possible on the basis that at some point one will trigger something meaningful?

A 15 minute Radio 4 programme introducing the economics and ego of marginal gains and the other way:

I wanted to spend some time thinking about how I know that I’ve made a good piece of work (or hosted a good process, if I’m not dealing with an object as an outcome). 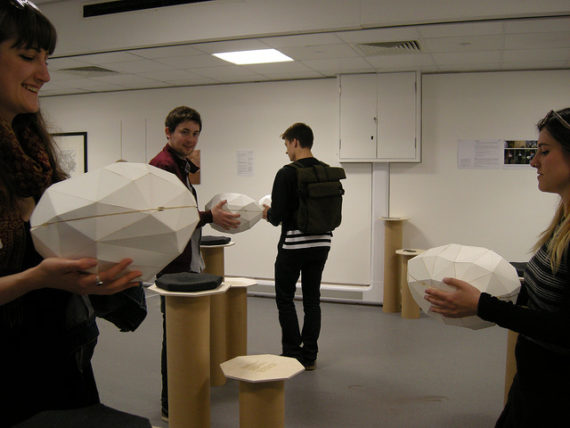 I went back to the evaluative document I wrote for the final research project of my MA a couple of years ago. (Like a dissertation, but different.) There’s a section in it where I describe the things that signified to me that I had made something worthwhile:

I knew I had done a decent job with this project, but I was blown away by the responses of people at the exhibition. Many first reacted with disbelief and suspicion as I explained “each pod is connected to the place in its story; walk with the pod and when you are facing in the direction of that place it will respond and let you know”. Some later explained that this was because it was just made from paper and they didn’t think it would really do anything; that they thought I was lying to them. Throughout the three days I repeatedly watched people stop dead in their tracks and facial expressions change to astonishment and delight.

Some people chose to walk with a single pod around the whole room, others spent twenty minutes or so spending time with all of the stories. Young, old, darting about, in wheelchairs and everything in between.

Many times I saw people call over family members to share the experience.
Many times I heard conversations starting “That was really interesting!” as groups left the room.
Many times I was told that this stood out for being the only interactive thing people had encountered throughout the whole degree show.
Many times I chatted to people about the project and the overlaps with their stories.

I recognised a few people making return visits over the three days I was there. The most striking for me was the student who discovered the pods on the Friday evening, then on the Saturday made sure he brought all the groups he was leading for the Open Day guided tours in to have a go. On Sunday he came back with his father.

I can’t remember if I made anyone cry with that project, but that’s another sign that I’ve done well, albeit one that always feels a little bit perverse.

I’m trying to categorise these responses now: provoking wonder; exceeding expectations (or being completely different to expectations); connecting to something in/of the people who encounter it; starting something; being something that people want to share with others.

I think these indicators of success would hold true for any of my self-initiated projects, but commissions are usually have someone else’s engagement agenda attached – usually more or different audiences. [Thinks: have I ever encountered a brief about the same people engaging differently?]

One thing that’s already occurred to me regarding that is that I’ve never really had the chance to assess things at the beginning so I have a before and after state against which to measure change. I’ll get told that they want to attract more ‘Adventure Families’ or whatever, but I won’t have much more information beyond that. In an ideal world, that should probably change…