“I feel like my work creates a lot of anxiety.”

Archie Brooks is a video artist in his final year of BA (Hons) Fine Art at Leeds Arts University. A collector of obsolete CCTV systems, he’s interested in exploring how we relate to screening and surveillance technologies, with an emphasis on audience interaction.

Beyond university, Brooks has made connections with a wider network of artists in Leeds, including Pavilion’s Artists’ Moving Image Network and Assembly House, where he has a studio space. At the time of writing, he was in the midst of co-curating ‘Aspect’, an interactive, experiential exhibition of emerging video artists at Assembly House, Leeds.

Could you say a little bit about your practice and what you’re making at the moment?
I’ve just fallen in love with video art. I’m trying to find new ways of looking at video. I want to look at it as a phenomenological object, or sculpture. I’m using screens as my medium, as a painter would use a paintbrush and paint. I like old technology, the quality of it. I’m interested in the idea that these monitors have already been watching and someone has watched them – they’ve had lives beyond what I’m doing with them now. Like us, CCTV cameras have lenses (eyes), and screens have memories. I anthropomorphise my monitors a bit. I like to name them; I form a kind of bond with them. That’s Cindy. And these are the Grimsby Brothers. [Four flatscreen monitors are arranged in a square, the screens facing one another. As I peer in from above, I notice murky, pixelated images appear on the screens. It takes a few seconds to realise it’s my image, quadrupled, on a live CCTV feed].

Is the four-monitor CCTV piece a work in progress?

Yes. When people look into it they become part of the piece. It also changes the space they’re in because they’re thinking about it differently. But even when no one’s here it’s always working, it’s always looking – it’s got its own life. I’m working on a transparent plinth which will hold all the cables. I’m not into hiding how these videos are made because that’s part of it, the wires running out like a spider’s web. I love the hardware and the software, it’s all part of the art. I’m really interested in structural film and the materiality of video. I did a piece last year that was a plinth with a lid and the video was inside it. Open it up, you invite people to look inside and subvert the usual way we watch and think about video. 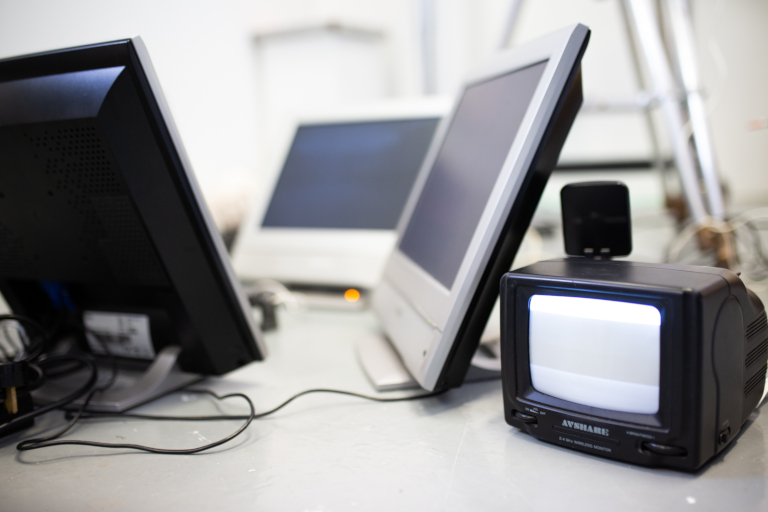 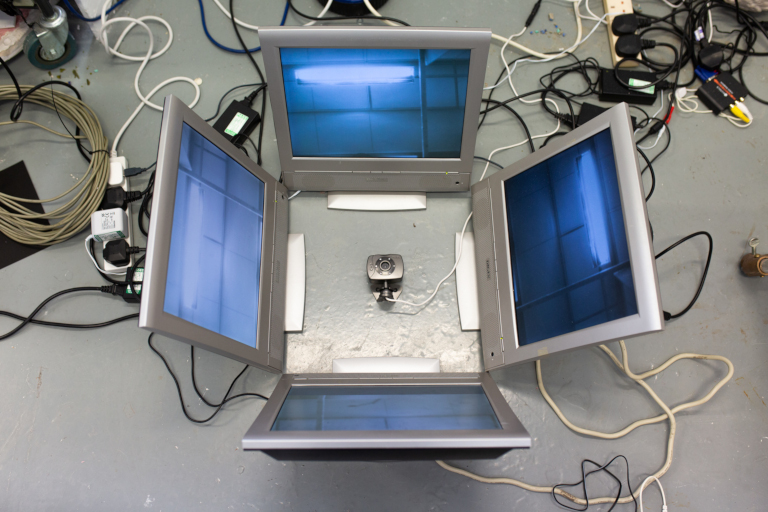 You’ve mentioned audience interaction, is this important to your work?  Extremely important, yeah. The work is instigated by people looking at it and interacting with it. But I don’t want my work to be interactive in the sense where you invite participants directly, I want them to enter and already be inside, like an unwritten contract – by looking you’re automatically part of it. I was reading recently about quantum theory of the observer effect, that just by looking at something the way particles behave on a molecular level can change. I draw a lot from that idea. I recently did a piece in the studio where I set up a live CCTV feed of the door, with a monitor set up here. So people would walk in, come over to see what was on the screen, and see the door closing on the monitor. They would know their shadow, their trace, has only just left the screen, because the door was slowly closing. I’m also really interested in delayed feeds. You enter a space, the image on the screen looks the same as the surroundings but then you see yourself enter two minutes later, and it’s like that past is imprinted. Whatever you did in those two minutes, you realise how solid the past is. I think it’s so interesting, the way you can mess with space and time in this way.

That leads nicely into my next question, which is about Durations, a video piece you’ve described as a study of ‘subjective time’. Can you tell me more about it?

I’m interested in observation, the idea of being watched, as in Michel Foucault’s panopticon. In Durations it’s just the person and a camera – they sit in a space without stimuli for as long as they can endure. The shortest duration was 15 minutes and the longest was two and a half hours. So when we watch the video we’re reliving 20 different non-concurrent timelines, existing simultaneously on screen. I like to tell people about the work first before they sit for it – it creates the idea in their mind that in the future someone will be watching them. Their present is conditional on a future event. It creates anxiety. I feel like my work creates a lot of anxiety. 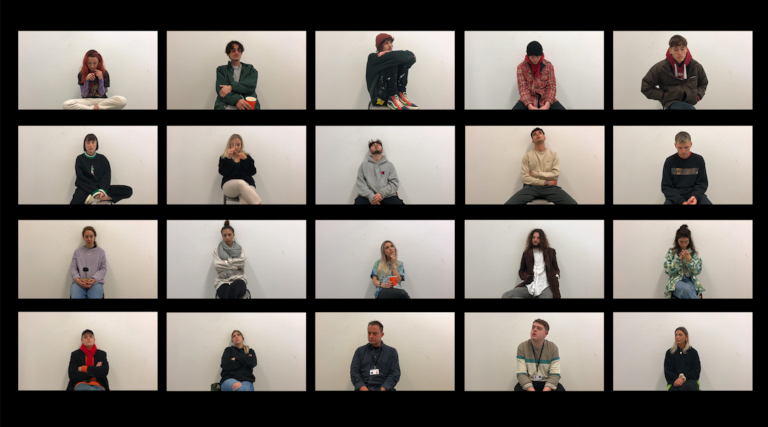 So do you hope to exhibit this piece as part of the degree show?

Yes, definitely. I would love to show Durations in an enclosed box where the viewer is in the same scenario as the people who are in the video. They are sat in a chair watching the screen and they are being filmed on a live feed, so people outside the room can see them on a monitor. A one in, one out system. The viewer is part of the piece, like the participant, and I want to create that bond between them, creating a kind of mirror. There’s also a sense of being watched but not knowing how they’re being watched or who is watching. I think that ambiguity, when you’re being watched by a camera, is the sensation I’m trying to create.

I’d love to have pieces using CCTV all around the degree show, where you’ll just come into a corner and there’s a little live feed of somewhere else, loads of little loops around the show. So you come into this room and there’s a feed of the room upstairs, and vice versa, and when you see one you realise that you were probably on another, and it’s that kind of tension. The quantum observer.

Interview by Joanna Byrne, one of eight a-n members on the a-n Writer Development Programme 2019-20 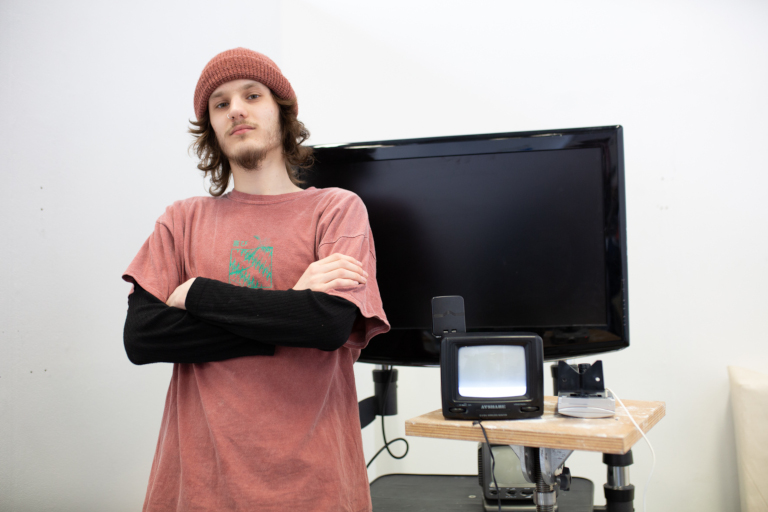 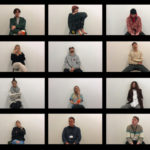 Painting, Royal College of Art. “I make works about thinking, works about my disdain for labour and works about powerlessness. I prefer the

BA (Hons) Fine Art, Teesside University, MIMA School of Art and Design. “I use photography to consider the relationship of geometric forms in

BA Fine Art Sculpture, University of the Arts London, Camberwell College of Arts. “Examples of Queer Domesticity is a piece of textile, based

BA Fine Art, Central Saint Martins Katarina’s recent work has been an exploration of the amalgamation of digital and painting, and the

BA (Hons) Photography, Cambridge School of Art. “Since 2016, the Brexit referendum has caused uncertainty across the nation which has resulted

MA Fine Art, Edinburgh College of Art.  “Underpinned by endeavours to critique the inaccessibility of the arts, my work revolves around the