“I’ve completely fallen in love and gotten addicted to painting”

The art department at Manchester Metropolitan University is thrumming. Downstairs, 2020-2021 aspirants await their interviews nervously. Upstairs, if the air in the third-year studios is any indication, turps-fuelled preparations for the degree show are in full swing.

Torin Bagueley is on the painting and print-making pathway of the Fine Art BA. He uses oil paint to “find” psychological portraits, drawing on imagery from obscure and humorous YouTube videos.

Bagueley’s studio bears witness to a recent spate of 13-hour days, and when we sit down to talk, his new works, like his artist statement, are still in a state of becoming. That’s because he has changed stylistic tack – it’s a big decision, and it’s also very much in the spirit of what he’s trying to do in his work.

You’re from London, how did you end up choosing Manchester School of Art?

I grew up in Watford, just outside London. I looked at loads of BA programmes, including the major London ones, and I felt like there was no studio space, no tutor presence, no availability of one-to-ones — and that’s what I wanted. But that wasn’t really a thing, down south. I came here on a tour, fell in love with the studios, met some of the tutors, who were really intelligent people. That’s why I chose here.

And it worked out the way you wanted?

Massively. It’s easily one of the best BAs in the country right now. For my MA — in a year or two, after I raise enough funds — I will definitely be in London because the programmes there are just fantastic. 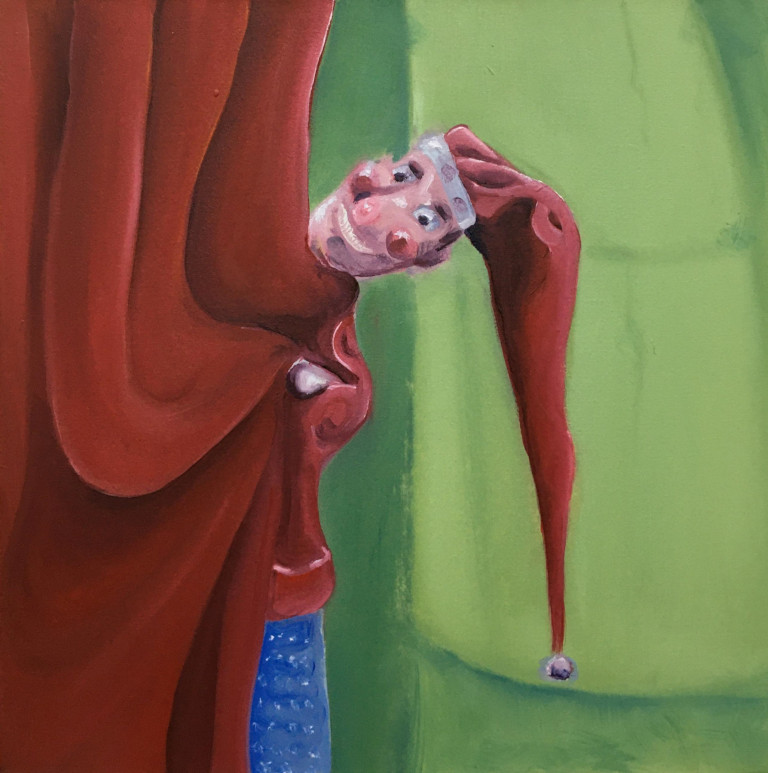 Looking at your wall, I see you’re not working directly from images anymore. Where does your source material come from?

The imagery comes from several places: the film Stalker, Google images. But mainly I use YouTube video screenshots — only of weird, obscure videos with fewer than 10 views. I type in whatever I’m thinking about, like performance or pedantic videos or cosplaying, and then I click on ‘latest videos’.

I use painting as a way of questioning the inherent weirdness of dressing up as a TV or video game character. I’m interested in what it becomes because you’re never really going to achieve what you wanted, so you end up creating a new thing. What is that? What will happen if I elevate it by putting it onto canvas? Canvases have this massive archaic history, but Spider-Man, for example, has only been around for a few years [in comparison].  There’s humour in taking something that many would click past, and putting it onto a solid frame, in rich oil paints.

There is an inherent sense of fear and bemusement about it, and curiosity about why people do it. I think it’s insane – people don’t seem to reflect now, which is frightening. Presenting and performing yourself is becoming more prevalent, to an extent where it ends up being pedantry or pure performance. I fear the larger, societal impact of that. I also think that there’s something really hilarious about the act of reaching to do something and just missing. That’s something I want to explore further.

In your statement you refer to ‘Notes on Metamodernism’. How does your work relate to metamodernism?

In my statement I talk about the upfront lie: admitting you’re trying to be something else, and if people like it, they like it, including an ‘I’m-not-sure-I’m-going-to-succeed’ disclaimer. I’m searching into the idea of giving up performance and giving into it at the same time. Escapism is great and lends a sense of complete control. But it can reach a limit where it’s quite a bad thing, like a vlogger overperforming themselves for the sake of others enjoying them as a character, not who they are. I want to search into that desire to be loudest, funniest and thinking that everything is fantastic. I think we are getting to the point where it’s detracting from real conversation. Everyone is just shouting.

I also feel like if I make a piece, it should be at least a little bit funny. The current work still has a risible aspect in that it’s elevating the mundane to an art context. There’s something very sincere about taking the time to paint it. Between modernism’s grand narrative and its critique – post-modernism – metamodernism is about the act of doing, being in between, reaching and all the while expecting to fall short. 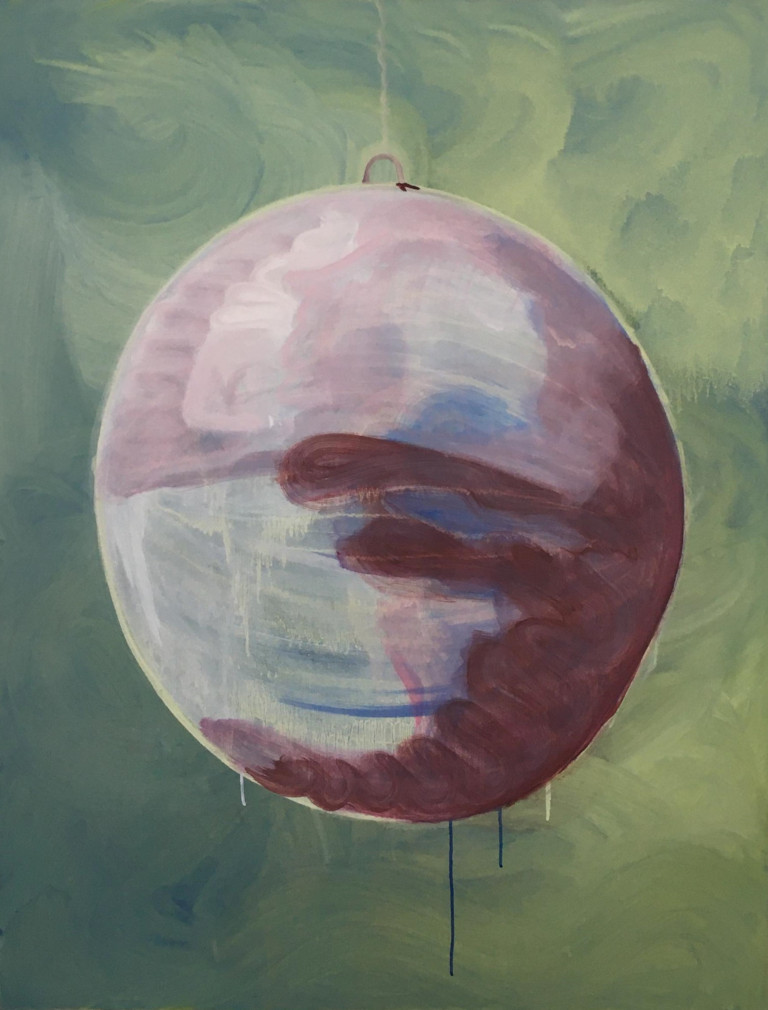 Once you have the image you want to work with, what does your process look like?

I might start with a key idea and a set of motifs, but marks and gestures can transfer it into something else. It’s like sculpting with paint. I draw, or use watercolours, and I also draw onto the canvas with paint, loosely. If I don’t like it, I restart. I’ll put it on the floor, cover it in white spirit and start again. That’s the main way that I find things.

What’s been your favourite response to your work?

It was from a tutor. We were about to start talking about a piece, he looked at me and said, ‘Are you ready for me to tear it apart?’ I was like, ‘Yeah.’ And for the next 10 minutes he picked apart every single thing about that painting. He absolutely destroyed it, and I loved it. I learnt more about my own painting and how to paint in those 10 minutes than from all the positive feedback I’ve ever had. I’ve completely fallen in love and gotten addicted to painting. But I’ll miss crits the most when I take a couple years off. It’s going to be tough.

Interview by Valerie Zwart, one of eight a-n members on the a-n Writer Development Programme 2019-20

Degree show: An online exhibition (dates to be confirmed), will be followed by a series of shows in the art school once the building has reopened. www.art.mmu.ac.uk/

BA Fine Art (International), University of Leeds.
“My praxis is centred upon the notion of ‘lumphood’,” explains Poppy Jones-Little. “I stri…