Jennifer Watts makes large and immersive sculptures that appear to defy gravity. They soar upwards and outwards, as if animated by some mysterious force hidden from view. Her approach to making sculpture is always experimental and continuously evolving, using a wide range of materials – including plaster, fabric, cardboard and metal – in unexpected new ways. Studios at the University of Hertfordshire have recently reopened in line with Government guidelines. We join her via Zoom after what has been a tumultuous year.

How has the past year been for you?

It’s been a strange year, definitely. There’s been ups and downs. When the studios closed, I had to adapt my practice to working from home. I tend to work on a larger scale and it was definitely a challenge, but I’m quite fortunate because I’ve got a bit of space in the garden. When it was very cold over the winter, I wrapped up in layers and did my sculpture work out there. Everyone is buzzing to be back in the studios. For me, it was like a light switched on. I’ve been in there eight until six most days, continuously working. 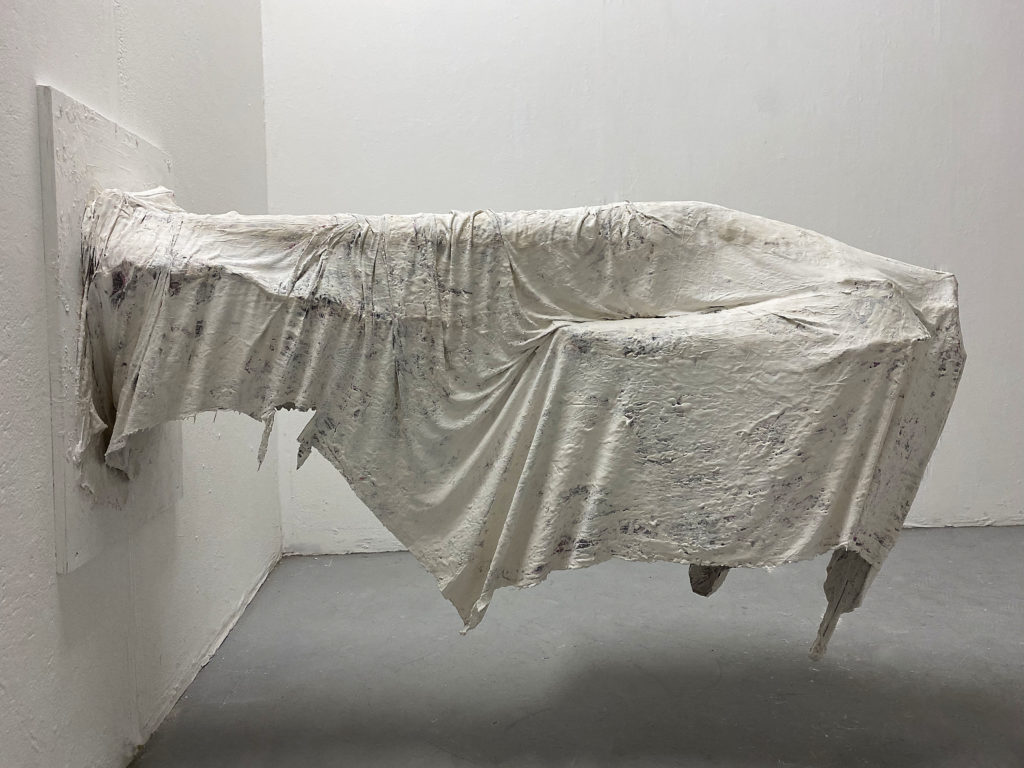 How have you found the experience of studying at the University of Hertfordshire?

It’s been brilliant. You get enough contact time, but not to the point that you’re being smothered. It’s not just the formal tutorials and crits, you also have those casual little conversations with tutors. That’s one of the things that attracted me to the course at the beginning. When I went for my interview, the tutors seemed to know the students so well. You’re not anonymous, they actually know your practice.

How has your work changed over the course of your degree?

I started off photography-based and always said I didn’t want to get into sculpture, but it kept coming up in crits. Tutors would say, ‘Your photographs are very sculptural’, and I thought, ‘Ah, are they really…’ Thinking logistically, where was I going to store it all? Eventually, I gave it a go. I loved trying different materials, not knowing where the work is going to end up. You have an idea in mind, but it changes and evolves as you go. Your initial idea probably wasn’t as ambitious as you thought it was. It gets to a point where the sculpture starts telling you what it needs.

I still use photography to inform my practice. I like to photograph my sculptures from different angles, so it manipulates what they look like. For instance, when I’m photographing my smaller sculptures, I’ll approach them from an angle that makes them look huge. Sometimes I’ll display my photographs alongside the sculptures too. 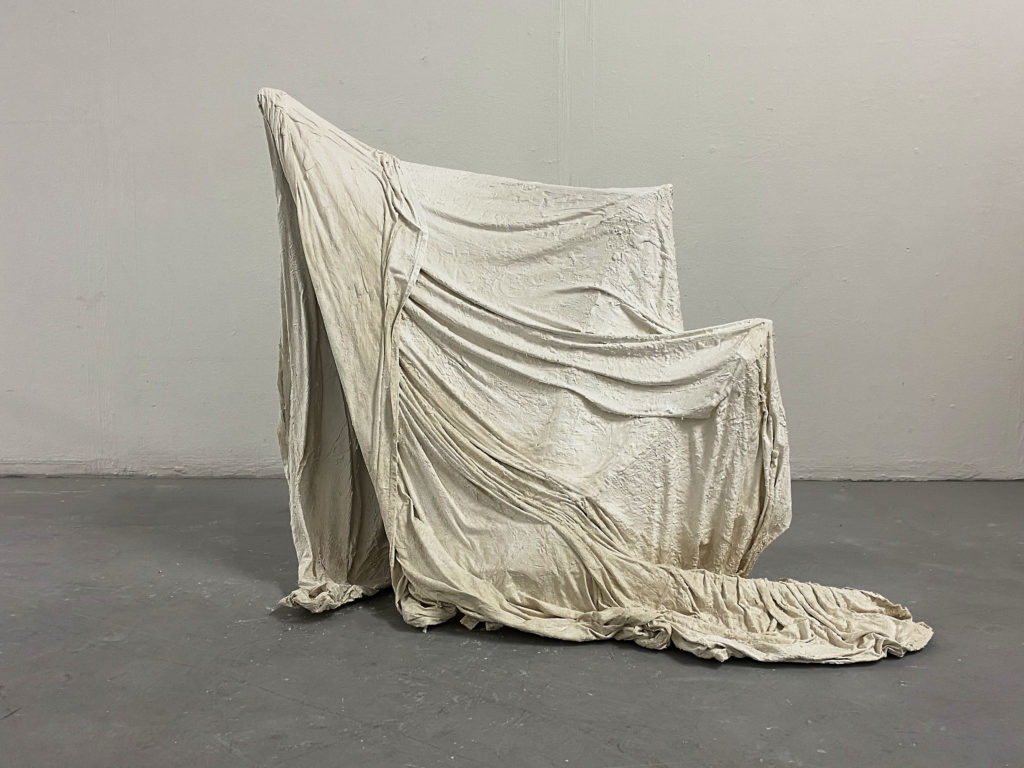 Why is scale important to your work?

I started off doing smaller things, but I really like being immersed in something. I’ve always been attracted to installations, anything you need to look up at. When something is bigger, it has more of a presence. Not saying that smaller things can’t have presence, because they can, but when you are in a large gallery space, if something is at a height that you have to look up at it, you feel its presence more.

Many of your sculptures use an interesting casting process involving plaster and fabric. Could you discuss how you developed this technique?

I started working with fabric and sewing techniques about a year and a half ago. I decided that I wanted to stiffen the fabric, changing the state of the material. It was intriguing to make it do something that it shouldn’t do. I had some plaster in my studio and wondered what it would be like if I mixed it with fabric. I wanted to see if the fabric would hold the weight of the plaster. The first time I tried it, someone said, ‘That’s not going to work’, and I thought, ‘I really need to prove you wrong now.’ And, it just evolved from there. It’s such a useful way of working and I didn’t realise how much I could actually do with it. I like the idea of getting the viewer to question what’s going on, asking, ‘How’s she done this?’ 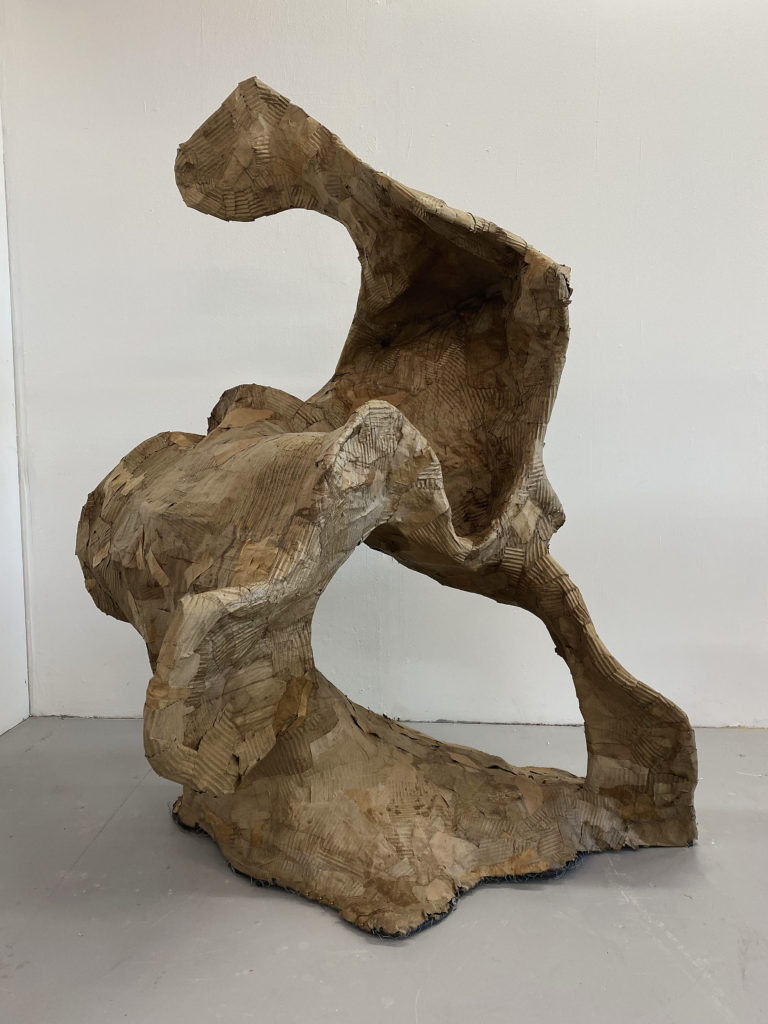 Could you discuss the role that absence plays in your work?

The absences are just as important as what’s physically there. When you have a void, you wonder what was once there before. I took some inspiration from the plaster casts at Pompeii. Seeing those people in their last moments was really moving. Once the fabric stiffens, it captures a moment in time, preserving something that was there before. It’s almost like the shell of the object.

I often used myself as the object to cast, but that was more because I was looking around the house for something I couldn’t ruin too much and I thought, well, I’ll just use myself!

What are you working on at the moment?

I made a small-scale maquette of a wave-like shape, using wire and masking tape. My idea was to scale it up, creating a six-foot tall wave out of metal. However, as soon as you start scaling up everything changes. It evolves and changes for the better. It’s forcing me to adapt and learn new methods.

Do you have plans once you’ve graduated?

As well as continuing my practice, I’d like to do a masters in art therapy. For my dissertation, I considered the relationship between art and care. I was looking at how artists use their practice as a form of care in a social setting, to help different communities. 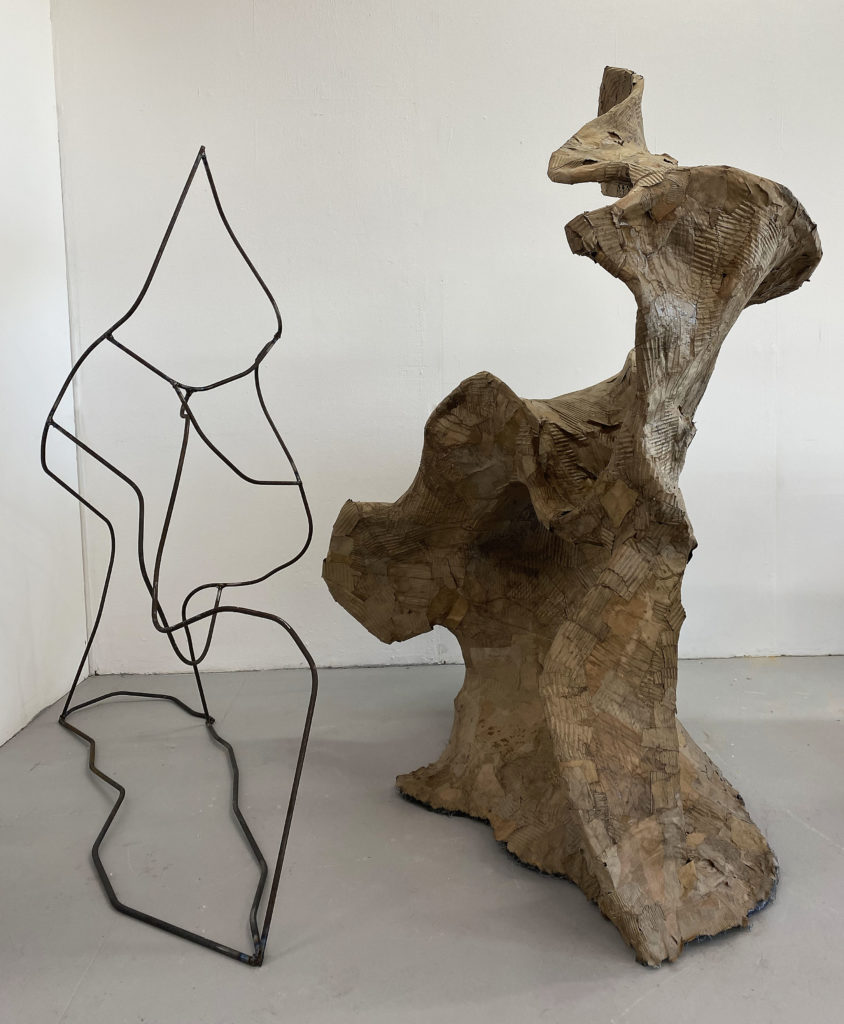