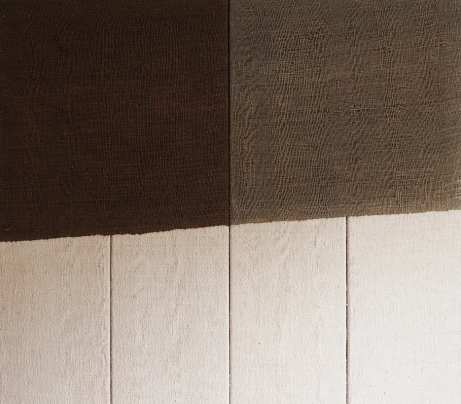 Lawrence continues to blur the line between craft and contemporary fine art; taking on an invigorating mixture of the primitive, the exotic and the childlike. All of these aspects play a fundamental part in his creative impulse, integrating a sense of naivety with fastidious care for the design and physicality of a painting.

Exploring a state of childlike freedom, Lawrence allows himself to construct a more visceral language. This is his return to a simplicity where craft and concept are still symbiotic, rather than juxtaposed or more often than not, absent as counterparts.

Primarily known for his textile works, Lawrence’s work incorporates a variety of fabrics, from cotton silk and linen to suede and wool. Working within the idiom of modernist painting, he takes the material support – the canvas or the plane – and sews, bleaches, stretches or stains the fabric to create works that aims to unify abstraction and representation.

Lawrence sees opportunities in the material before he creates the work. Each piece has an independent identity and in a parental role, Lawrence simply assists in that realisation.

Lawrence is at his best working within a limited range of colour; preferring instead to exploit surface, texture and tonality. The grain of the textiles, and the variations in textures have their own beauty through which he conveys an atmosphere and delineation of form.

By working with materials that already have a history – lost in the weave and textures of his creations – Lawrence invited the audience on a forensic journey. He asks that the audience entertains an idea of a life before the work, a story from manufacture to reclamation that led to this, his first solo exhibition.

Lawrence studied at BA level in creative direction of fashion at London College of Fashion. Since then he has used his experiences as a director to assemble work, in a similar way to a production or choreography. Starting with a lead character, he scouts: streets, markets and skips. Once he has a relationship with his protagonist, he begins to cast the production including sympathetic counterparts to his star.

Lawrence regards his work as an organic process of experimentation and discovery, lead by his materials on a journey of improvisation. He still regards his role in the work as a director, letting serendipity guide the final piece or perhaps, visual performance of his evanescent cast.