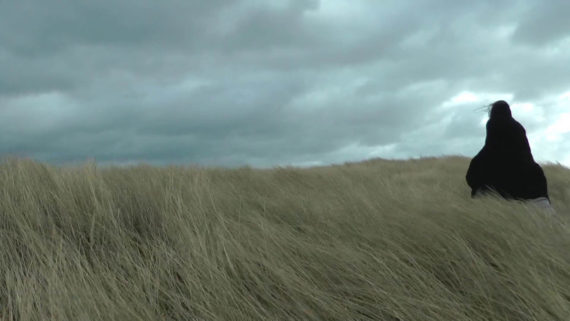 The body of new work, Attempts above and below sea level, includes actions at Kenfig dune system and pool, above the supposedly buried and submerged town and extends to plans for attempting to cover up with black fabric the ‘beached’ concrete whale at Aberavon.

During Drift Factor the artist attempts to cover and protect the sand dunes in impossible conditions, near the Sandfields council estate which was built on the dunes and where Vye grew up. Through the act of trying to shelter and conceal, this film reveals the futility of the action and documents the forces at play. Filmed during storm Doris, the work embodies an act of transformation. The sense of foreboding and loss echo the metamorphosis of the coastline and days gone by. In acts of grief and hope; memory and forecast, the artist grapples with what is past and what is ahead, but perhaps most poignantly what is happening right now.

Adele Vye grew up in Port Talbot, South Wales and studied Fine Art at Oxford Brooks University. Vye is based from her studio in Swansea as well as working out in the field. Her site-specific explorations respond to the artists timely questions and take the form of documented actions. Vye was awarded the John Brookes Memorial Prize for Fine Art in 2005 and Welsh Artist of The Year for Time Based Media in 2009.

Ephemeral Coast, www.ephemeralcoast.com is a curatorial research project led by Celina Jeffery. It brings together artists, writers and climate change experts to explore how curating can advance consideration of coastal climate change.

Ephemeral Coast identifies the coastline as a site and indicator of the radical shifts in geography literally taking place now as a result of environmental change. It proposes that curating contemporary art is a unique process through which we may discover, analyze, and re-imagine the emotive discourses surrounding these ecological and cultural transformations.

Mission Gallery is one of Wales’ best adapted spaces for the contemporary arts. Mission Gallery has developed a reputation for dynamic and distinctive programming, to present excellence across the visual arts, applied arts and craft, from across Wales and beyond.