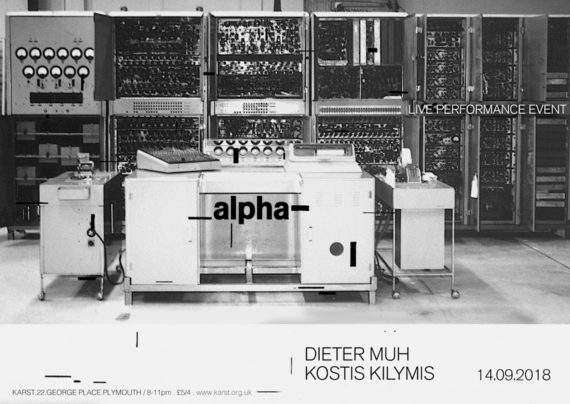 Steve started making noises back in 1979, experiments on cassettes, Short-Wave Radios, Interferences, synthesiser noises encouraged and influenced by the UK DIY scene and Industrial Music of that period. Most of the 1980’s was spent in the independent cassette culture releasing a variety of tapes with many collaborators.

Steve works with manipulated acoustic sounds. Percussion, metals, glass as well as the spoken word. Operating ‘beneath the radar’ (as he prefers to call it) Steve has built a heavy arsenal of releases over the past 39 years under various pseudonyms and with a variety of collaborations. He is most recognised for his involvement in the sound project DIETER MŪH and his radio broadcasts as MUHMUR RADIO on Soundart Radio (Dartington).

Kostis Kilymis is a Bristol based artist working with feedback systems and the notion of representation – in musical contexts or otherwise. Sounds based on noise, electronics, voice & field recording. He is involved in the Organized Music from Thessaloniki & Rekem labels, publishing experimental or less known music and sound art. He has worked with the likes of Phil Julian, Sarah Hughes, Leif Elggren, Lucio Capece, Nikos Veliotis, Jin Sangtae, Stephen Cornford and others. Work of his has been published on Rekem, I Dischi del Barone, Strange Rules and Coherent States.

All profits and proceedings go to supporting artists and the future development of a new curated programme of live events.