Anneké Pettican is an artist and co-director of Brass Art (1999 -) with Chara Lewis and Kristin Mojsiewicz. Their collaborative practice explores the uncanny, including aspects of doubling and the limen – the inbetween spaces of the physical world and the realms of the imagination. Pettican is also is Senior Lecturer in Digital Media Technologies, and Course Leader of Animation, Motion Graphics and Multimedia Design at the University of Huddersfield.

Brass Art employ traditional analogue and contemporary digital media, using and misusing them in search of the uncanny, to create artworks in which the artists are both present and absent. Brass Art capture themselves in real and imagined situations. They have occupied museum collections, been passengers in hot air balloon flights and acted as trespassers. In 2008 Anneké Pettican received an Arts & Humanities Research Council Practice-led and Applied award which enabled Brass Art to research white light laser technology in order to scan themselves faithfully. The resulting portraits were staged, performed, digitised, modelled and printed in 3D to create ‘uncanny doubles’ which can be seen in a series of light-based installations and sculptural interventions.

This initial work resulted in Brass Art more recently researching and developing the potential for 4D facial scanning working with both Glasgow University and UCLAN.

In 2011 Brass Art initiated a new project, Shadow Worlds | Writers’ Rooms. Beginning at the Brontë Parsonage Museum (2011), Brass Art captured the masking and unmasking of themselves and imagined alter egos within the domestic spaces. The project used both digital photography and custom built software, combined with Microsoft’s Kinect, to produce strikingly different versions of each scene. More recently, Brass Art exhibited at the Freud Museum and organised Folds in Time: Artists’ Responses to the Temporal and the Uncanny, a day conference at the Freud Museum bringing together artists, curators and writers to examine the ways artists harness aspects of the uncanny and the unconscious in their navigation of physical and imagined spaces.
In 2012 Brass Art presented new research on 3D and 4D scanning in relation to the creation of shadow worlds at Siggraph 2012, Los Angeles, and their paper was published in a special edition of Leonardo (MIT Press). They further developed aspects of this practice as artists in residence at Creative Lab, Centre for Contemporary Art (CCA), Glasgow, 2012.
Additionally Brass Art collaborate with other practitioners, researchers and industries. Recent artistic collaborators include Professor Monty Adkins, Simon Patterson, Alison Mealey and Spencer Roberts. Pettican and Roberts installations have been shown at international festivals including the International Symposium of Electronic Art (ISEA) and Bank Art, Yokahama, Japan as part of the 2008 Biennial.
Image: Shadow Worlds (2012/13);Kinect video, black & white, looped. Part of the ongoing series Shadow Worlds | Writers’ Rooms Edition of 6. With Spencer Roberts (programming) and Alistair MacDonald (electroacoustic)
Find out more about CG Associates here. 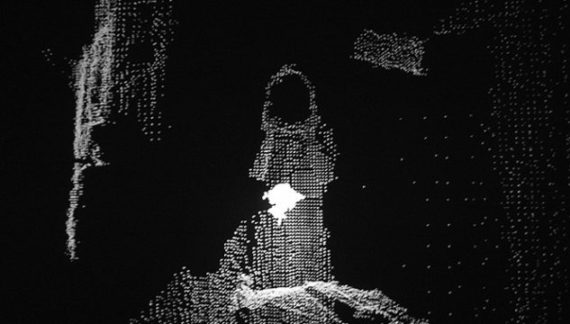