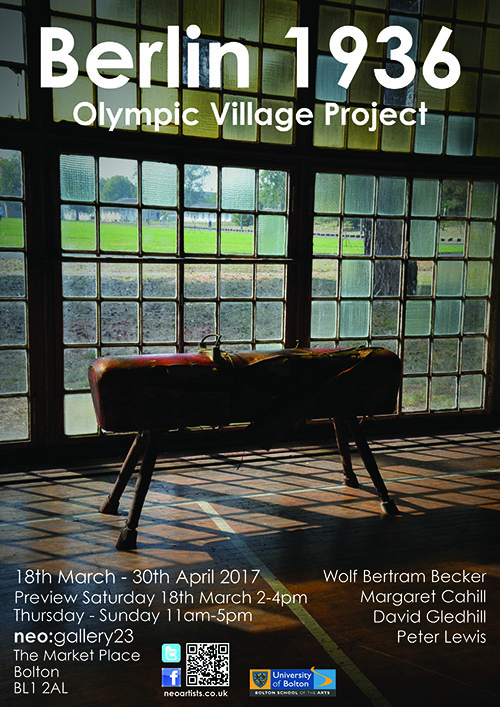 In September 2015, artists Margaret Cahill, Wolf Bertram Becker, David Gledhill and Peter Lewis, were invited to visit the site of the 1936 Berlin Olympic Village by its current owner, DKB Stiftung für Gesellschaftliches Engagement Berlin and Palis Advisory GmbH Berlin, who initiated and organised the project.
The artists have spent the past year producing work in response to the site, and Berlin 1936 is the first UK showing of the Project.
The first exhibition of the work took place in Berlin at DKB Deutsche Kreditbank’s headquarters during July and August 2016 and was transferred to the Gymnasium at the Village itself for Germany’s ‘Day of the Open Monument’ in September 2016.
This expanded UK edition of the Project features painting, printmaking, collage, video and 3D pieces and includes previously unseen and specially produced new work.

About the Olympic Village
The Village, which was a military base up to 1934, when work began on its conversion for the Games, is in Elstal, Wustermark, 14 kilometres west of the Berlin Olympic Stadium. Taken over by the Soviet military in 1945 and finally abandoned in 1992, the 135-acre site is largely in a state of disrepair. It features a fascinating blend of architectural and artistic remnants from both the Nazi and communist phases of German history and constitutes a palimpsest of shifting cultural and political ideologies. The shells of former Soviet housing blocks overlook a cultural centre complete with Nazi wall relief and communist murals, an international dining hall or Speisehaus der Nationen and a scattering of the original ‘cottages’ built for the national teams. A reconstruction of four times gold medallist Jesse Owens’ bedroom draws guided tours, but the artists were allowed to ‘access all areas’ and roam the site freely for a period of three days of blistering late Summer heat.