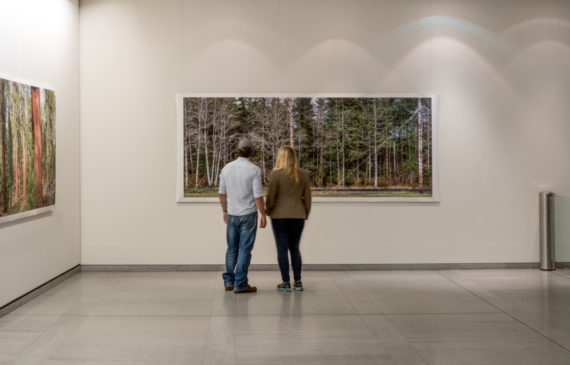 I have been very deliberate in presenting this current show. Take ‘Merced River, Yosemite National Park, 2015’, this image is presented upside down, which is no mistake! It is meant to challenge your eyes, I hope you will question why I have gone to the trouble to do so but more importantly I hope you will discover a deeper beauty in the abstract forms this reflected landscape offers. From the street it seems like a traditional view with a hint of something not quite right which invites you in, as you approach the work it becomes somewhat unsettling as you eye tries to make sense of the image as one. By challenging convention and allowing yourself to get lost in the detail you realise it it’s not strictly a photograph, it is in fact an echo of a moment in time.

The title of this show ‘Fragile’ references both the presentation of raw prints which are totally exposes and extremily vulnerable as well as our relationship with our natural, yet ultimately changing, world. The distinct and prehistoric form of a tree provides a tie between ourselves and our earthly origins; dating back hundreds of millions of years, each has borne witness to our evolution and they are symbols of our relationship and weight on the earth.

What really struck me about my travels in America was how fragile the trees I visited were and how much human activity has endangered them, we think of globalisation as a modern phenomena but you may well be surprised to discover we have a number of Giant Sequoia’s growing here in the UK as in 1850’s, William Lobb visited The Giant Sequoias in California where he collected seeds, shoots, and seedlings. These and many more were snatched up by wealthy Victorians to beautify their great British estates kicking of quite a trade.

California has been experiencing drought for many years mainly due to human agriculture and this has seriously endangered the Giant Sequoias. California’s iconic redwoods are also in danger from fire and infectious disease again as a result of man. Further north on the Olympic peninsula in the pacific northwest exploring the temperate rainforests of Hoh and Quinault feels like stepping back in time. However these rainforests were very nearly lost to us, logging which only began in the late 19th & early 20th centuries was so intensive that we got the first view of the clear-cut hillsides as early as the 1920’s. This temperate rainforest had been pristine for millennia prior to this and today is littered with the stumps of ancient trees that were chopped down to fuel mans insatiable demand for raw materials.

In a career that has spanned four decades, David has received wide critical acclaim for his work. His landscape photographs were first published in 1989 by MARCO (Hong Kong) in an article marking the 150th anniversary of photography and looking to the next generation. David’s images have been described as “providing soul for buildings” and have been exhibited all over the world. He has taken part in over forty national & international art fairs and his work is included in the private collections in over fourteen countries. David has also taken part in more than thirty-five group shows and a number of two man shows and solo shows in London and abroad. Current Solo Show 60 Threadneedle Street is London, EC2R 8HP. In the UK his pictures have been seen in venues ranging from The Royal College of Art to The Royal Academy of Art and internationally from New York to Hong Kong. He often raises money for charities through his artwork and his photographs can be found in the collections of Great Ormond Street, The Royal Marsden Hospital, The Tavistock Centre; Paintings in Hospitals collection; Arthur Rank Hospice, St Wilfred’s and Marie Curie Hospices, England; Bergamo Hospital, Italy; and St. Anthony’s Hospital, Corpus Christi, Amistad Community Health Centre, Christus Spohn Hospital, Driscoll’s Children’s Hospital, Kindred Hospital and River City Hospice, USA. David Anthony Hall 07768077254