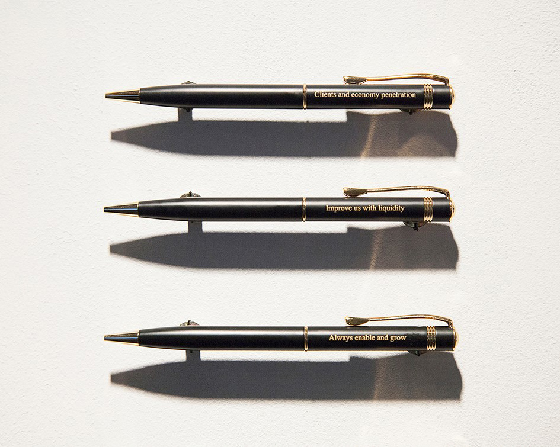 The stock market, an endless pool of changing values. A constant movement of data circulation that stands behind the curtains of our everyday life. Its mechanical wheels turn slowly in the back stage’s of international corporations, translated into mathematical equations that determine their influence and power.

In the great hall of NYC stock exchange stand tall round pillars, covered by dozens of flickering screens. Green numbers and letters run up and down these custom monitors. To the untrained eye they are nothing more than a visual spectacle. Deciphering it is like trying to find meaning in the shapes clouds form in the sky. It is only the brokers, priests of the market, who can produce meaning by gazing at the sky of figures appearing before them. Only they can predict the economic rise and fall of kingdoms, the collapse of empires, or the birth of a new star. The delicate task of buying and selling is performed in part in screams, shouts and gestures in front of the screen. They are the prophets, practicing the divine art of money making –the knowledge of value and profit.

Occasionally (as in any astronomical system), something happens. A solar eclipse, a sudden but drastic change of climate…

The RYDER is proud to present the work of Fabio Lattanzi Antinori, which celebrates the fragile existence of mass data archives. Drawing from daily-trading figures, financial flash-crash algorithm records, news-websites, search engines results, dark pools operations and E-bay cheapest sales descriptions, Antinori manipulates these into stories of collapsed financial empires. Like the narrator of a Greek tragedy, his hand flickering on an imaginary harp, he plays the soundtrack of the predetermined collapse, transforming stock values and data entries into angelic voices who sing the chorus of inevitable catastrophe.

Fabio Lattanzi Antinori, born in Rome, earned his MFA in Arts and Computational Technologies from Goldsmiths, London, in 2013. Antinori was selected for the PS1 Summer School, New York, in 2012 to study with Marina Abramović; he recently had a solo exhibition at the MoCA Shanghai Pavilion and was also part of the Triennial of Fiber Art in Hangzhou (2016). Recent exhibitions include a duo show with Jeremy Everett at Kristin Hjellegjerde gallery, London (2016), Brun Fine Art (2016), East London Printmakers, London (2015), and Dream Home, Arebyte Gallery, London (2015). Group exhibitions include the Kaunas Biennial, Lithuania (2015), Heaven Is A Place Where Nothing Ever Happens, Pi Artworks, London (2015), NYU, New York (2015), Museum of Contemporary Cuts (2015), Production Methods, Watermans Arts Centre, London (2015), the Victoria & Albert Museum, London (2014), and the Museum für angewandte Kunst, Vienna (2013). He was awarded the Connections Through Culture bursary from the British Council (2016), the A-N Travel Bursary for extraordinary and inspirational research (2016), the Artist International Development Fund from the Arts Council (2016); he was selected for Guest Projects (2015), the Florence Trust residency (2014) and the Open Data Institute collection (2012). Public collections include the Villa Lagarina Civic Museum, Rovereto and the Crespina Civic Museum, Pisa and the V&A, London.