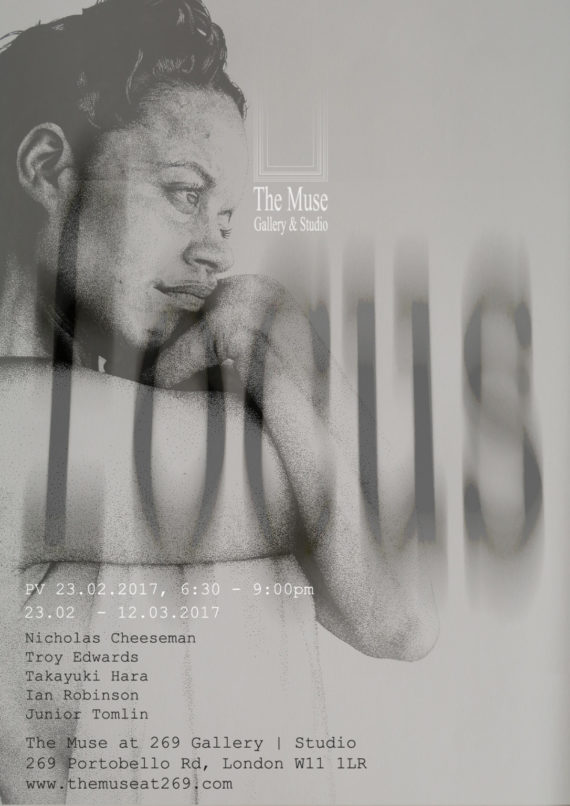 Statement: “When it comes to my work I do not merely want to capture the images with my pencil — I want to give them life once more, I believe that the emotional value of my work must always trump the aesthetic”. “I hope my art speaks to people from all routes of life and provokes a response, or at least a curiosity in them“.

Troy Edwards Finlayson was born on December 14,1979 in London, UK. He is a graphic illustrator, portrait artist and photographer. A self-taught artist, raised in Brixton, Troy began drawing at a young age.

Over the years, the London based artist has developed a talent for creating detailed pointillist art. Simple, elegant, and engaging, Troy uses thousands of dots to create texture and depth within his work. These hyper-realistic portraits are made only with an HB pencil and fine liner pens. His pieces are estimated to consist of approximately 100,000 dots, which takes about 180 to 250 hours to complete a single portrait.

His work addresses, race, colonialism, sexuality, intimacy and the frailty of the human condition.

I am a painter working with themes for the vinyl enthusiast and book collector. Centred in the way I work is my own record collection and my practice relates to a personal hobbyist arena. A world full of the close-to-home activities of reading and listening to music.   In my enthusiasm to capture a subject I visit special collections making enquiries that fuel my own interests. The areas that interest me uncover care and passion, behold a forensic value as the signs and triggers reveal a visual translation.

After graduation with first class honours in 2011 I completed a residency here at The Muse Gallery and had a solo show in October 2012. The work from my graduation show won the Landmark painting prize. The work Stylus produced here in Portobello Road featured in the Griffin art prize and the Guasch Coranty Foundation International Painting Prize. In 2015 I won the Bryant and Keeling painting prize and last year I featured in the 2016 Aesthetica Art Prize Anthology Future Now.

Junior Tomlin started his career creating computer game packaging artwork. his style is reminiscent of science fiction , fantasy, airbrushed book covers. His chosen mediums are acrylics and gouache and a vector package Adobe illustrator. Well known for the art that he produced for the music industry he designed numerous record covers for dance music, techno, trance, jungle, and death metal and fliers for the rave scene.  In Soho he worked in a special effects company, taught graphics and art, and collaborated on two street art installations in Portobello Road.

At present he is still creating digital art, holding workshops in schools and teaches graphics and illustration

‘Nothing retains its original form, but Nature, the goddess of all renewal, keeps altering one shape into another. Nothing at all in the world can perish, things merely vary and change their appearance. What we call birth is merely becoming a different entity; what we call death is ceasing to be the same.’ –Ovid ‘Metamorphosis’ Book 15

The idea of shapeshifters has travelled through history. It can be found in many myths and stories all over the world, or even in many forms of contemporary culture such as film and literature. My work is not concerned with the details of these stories, but rather what they represent and reveal metaphorically in this world of uncertainty.

One of my inspirations was the poem “Metamorphosis” by Ovid, in which human forms constantly transform into other entities, suggesting a new potentiality of being. In this world we are living in, nothing ever stays the same, we are in a constant state of flux; shapeshifting. I became interested in the idea of shapeshifting as a way to open up the unknown space hidden underneath the surface where organs are revealed.  Full of potentiality as an opposed idea of psychoanalysis, a concept Freud and Lacan coined, based on the binary ideas of ‘conscious’ and ‘unconscious’, or ‘whole’ and ‘lack’. My aim is to go beyond psychoanalysis to free ourselves from restraint, to reach a place where endless potentiality exists without boundaries.

French Philosopher Giles Deleuze’ coinage: ‘becoming’ and ‘rhizome’ were other ideas that influenced my work. They are models of thinking, an ever-expanding labyrinth without a centre, capable of either opening up or closing down. Although Deleuze’s idea leads to an extreme emergence which excludes others, blurring the boundaries of identities, into the singular entity of immanence. I am interested in the process of our identities becoming blurred and multiple before becoming a singular existence.  A chaotic emergence where organization is impossible, what is hidden reveals itself, what is different no longer differs.

With my work, I would like to evoke the awareness or recognition to open up, the potential to become a new entity, the possibility to embrace the differences, rather than dismissing the differences as demonic, to emerge as one.

Born in Tokyo, Japan, London-based artist Takayuki Hara’s work evolves from the idea of shapeshifting: it is an antithesis of boundaries and intransigence of human tendencies. His unique ability lies within the transformation of this idea into graphic and intricate linear drawings. His seemingly eclectic collections of influences are tied together and well-digested, feeding his work visually and conceptually. Hara studied Japanese Literature: Creative Writing in Japan, the rich narrative elements of his work come from the background as a writer. His work has been exhibited widely in the UK, and internationally including United States, Germany and Poland, and numerous Art Fairs across the globe. Recently his work was shown in European Parliament in Brussels, and ‘Before We Fall Again’, solo exhibition at Manggha Japanese Museum in Krakow, Poland in 2016.

Nicholas Cheeseman
Nicholas Cheeseman investigates materiality and process. His works consider the value of these factors through construction, deconstruction, reconstruction and restoration. He uses the physical act of making as a means of thinking, and the outcomes explore the boundaries of imperfection, incompleteness and impermanence. He uses a variety of media and techniques including drawing, embroidery and sculpture.

Nicholas lives and works in East London. Having studied for his BA in Fine Art at Staffordshire University he recently continued his education at Chelsea College of Arts (UAL) in MA Fine Art. He has exhibited across London and the UK, has work in a number of collections, and has been commissioned to produce work in England, Australia and the USA.