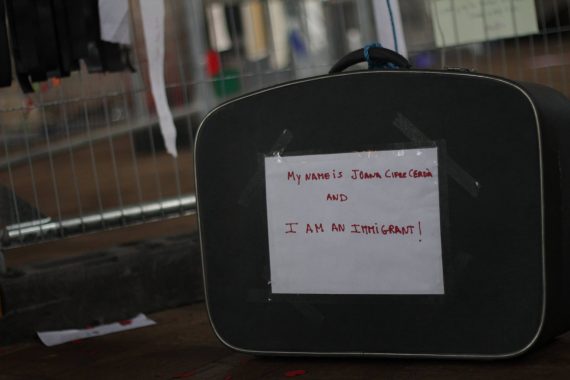 Joana Cifre Cerdà is a Spanish artist living in the U.K since 1994. She has recently been granted Indefinite Leave to Remain in the U.K. (ILR) in 2019. As part of the exhibition Joana will be performing “UK Resident” from 29th to 31st January. This is a meditation / reflection on what it means to have ILR. Clive MacLennan shows his series of B/W photographs titled “A year to remember … or maybe not” in which he dealt with a year where things were challenging. Kev Snell exhibits a series of collages that loosely centre on his relationship to Gainsborough and British politics. And Knaithan Parks, the youngest of these four artists, will show a series of experimental drawings and paintings. What is actually on display is likely to change over the duration of the show.

I am a PhD candidate in the Photography Department at the University of Plymouth and receive research funding from the University of Plymouth and The 3d3 Center for Doctoral Training Programme. The focus of my practice research is on ‘Photography and its Contribution to the Understanding of Digital Porosity’. I exhibit widely, both nationally and internationally and have undertaken various residencies f.e. in New York, Rome or Victoria Baths in Manchester. To date, I have been awarded two major fellowships (Arts Council Austria, City of Bremen), the Prize for Visual Art of Upper Austria, and a Research Fellowship at Southampton Institute. website: www.claudiapilsl.com blog: https://loosespace.wordpress.com/ instagram: in_search_of_place