From the Ground Up - a-n The Artists Information Company 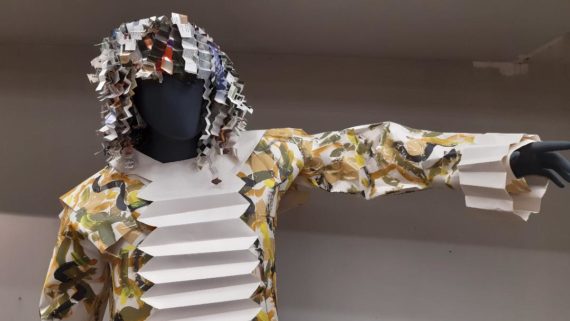 Nine artists explore ideas, ideals and idiosynchracies of Wigan and the former retail setting of the exhibition:

Standish-based artist Jane Fairhurst explores the delicate ecology of a threatened woodland between Wigan and Leigh and the implications of its loss for non-humans and humans alike. She shares a Standishgate window with Chris Rainham, whose botanical drawings celebrate the unremarkable plants and flowers he has found encroaching on the Wigan’s urban environment, accompanied by texts investigating ideas of socialists and socialism sparked by George Orwell’s Road to Wigan Pier.

For Ian Vines, the Pier has inspired an installation of blurred photos, objects and everyday materials which play with ideas of reality and representation. He shares an Arcade-facing window with Sarah Feinmann who picks up concerns about the environment – as well as the demise of well-loved high-street stores. She has used packaging from on-line purchases, printing with plastic bags on panels from cardboard boxes.

Back at Standishgate, Tina Finch, originally from Hindley, continues the critique of consumerism and advocates for sustainability. She has constructed a shop-window mannequin from recycled paper and paint, harking back to the time not so very long ago, before fast fashion, when clothes were repaired, darned and patched, handed down, refashioned or repurposed. Claire Hignett shares the window, her tailor’s dummy wears a cloak focussed, conversely, on what we keep, raising questions of how Wigan’s past is shaping its present and future.

Maya Chowdhry and Sabrina Fuller celebrate this past, present and future through a sound-walk exploring the time-line of Wigan’s rich music scene up to the contemporary. QR codes in six sites through the town centre take the listener to stories, voices and tunes of venues, gigs, festivals and bands. The walk starts and finishes at the Arcade, where Paddy O’Donnell interprets From the Ground Up almost literally in a sculptural eruption referencing the energy, resource, originality and humour evidenced in Wigan’s continued self- reinvention.

Jane Fairhurst says: ‘As a Wigan-based artist I’ve really enjoyed seeing how, through each artist’s response to the space and place, universal themes emerge – sustainability and a green economy, as well as, specific to Wigan, a resilience demonstrated through its past, present, and above all, its future.’

The nine artists are from across Greater Manchester and originally came together in 2019 through the Castlefield Gallery’s bOlder programme which develops and supports artists aged over 50. This is the group’s third exhibition together.

Recently I have used digital storytelling and live art to create immersive and democratic experiences for audiences. ‘What’s Eating Our Reality’ (2018) was commissioned by Lancaster Arts: an immersive dining experience augmenting the audiences’ view of shopping and eating by projecting stories of global food injustice onto their dinner plates. I received an Arts Council grant in 2016 for my research and development project, ‘Peas on Earth’.