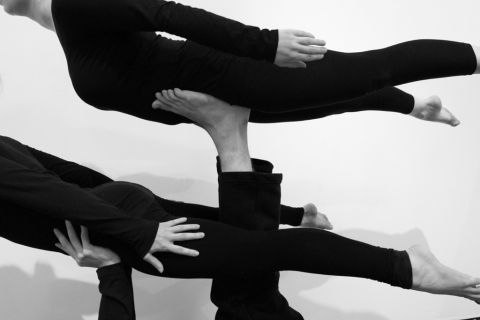 Castlefield Gallery is pleased to present its annual Head to Head exhibition featuring Hayley Newman and Emily Speed. Programmed under the gallery’s 2012/2013 overarching theme of World In Transition their work explores the relationship between the body and architecture. The exhibition will open with drawing and photographic works by the artists including Newman’s key 2004-2006 work The Volcano Lady; two photographs documenting a performance of the artist wearing a costume designed to resemble a live volcano and Speed’s drawings of bodies with deeply crusted architectural skin, carapace or armour, where only the legs are free to move; their work shares a mutual interest in the use of humour and sexuality to mischievously coerce the tension between the physical and the metaphysical. Major new works in the exhibition include Newman’s Domestique consisting of over fifty donated used dishcloths embroidered with faces and Speed’s Build Up, a sculptural piece developed with acrobats in Manchester’s iconic Toast Rack building. ﻿