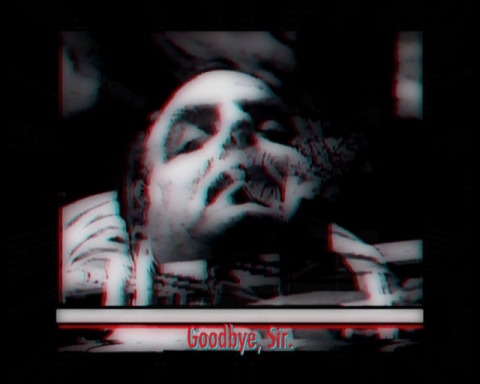 Bureau presents 'Here' by Jim Hollands; a hallucinogenic dissolution between the screen and the viewer forming a radical new art agenda for the 21st century.'Here' is a seventy-minute remix of a rarely seen existing work written by Joe Orton, called ‘The Erpingham Camp'. Originally screened on TV in 1966, it has been experimentally remixed in sound, image and words, with subtitles, and partly in anaglyphic (red/cyan) 3D. Large parts of the work operate under flicker frequencies of 8-13hz, and as such are viewable by epileptics or those prone to seizure at their own risk. Called 'one of the most important new videos to be made in the UK in recent years' by Ian White, film curator at the Whitechapel, London, its psychic 3D odyssey erases and re-inscribes Orton's play with a viral anti-narrative. Here transposes modern life into a structure, drawn as much from the cut-ups of William Burroughs, as it is from the psycho-social machinations of the internet, and by doing so becomes video as radical communication. Jim Hollands is an artist working across film, sound and performance. He was the resident curator of a major avant-garde centre in London, The Horse Hospital, between 2000-2006, and is a member of the experimental sound group, Patricide. Hollands has recently exhibited at the Whitechapel, London, and A Foundation, Liverpool, UK.