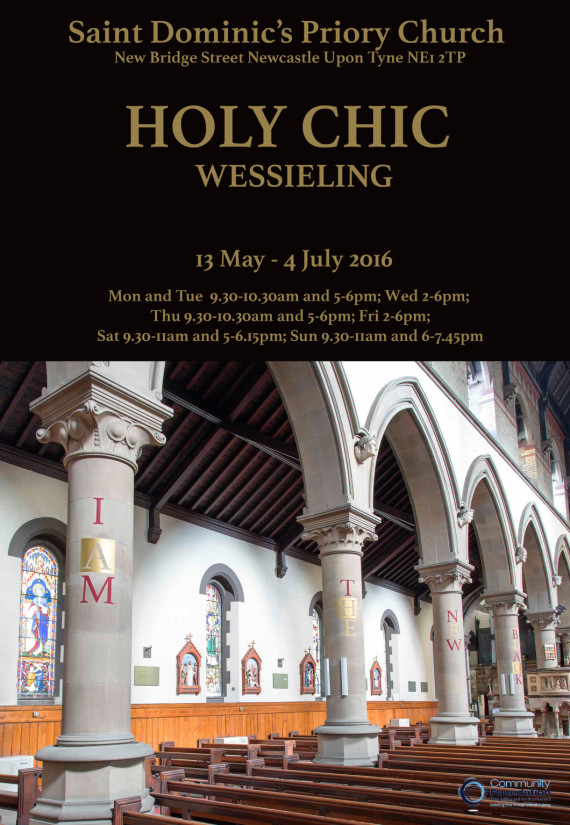 What happens when fashion and religion collide? To many, fashion is religion. It demands a stern system of faith and belief. Aren’t religious practices and the rituals of a catwalk performed in similar sequestered places, in comparative set sequence? Holy Chic offers an playful interchange between fashion and religion. Installation artist WESSIELING paired devotional quotes collected from the Dominic’s parishioners with popular fashion language. Enlarged text in blood red and sparkling gold envelopes the church’s pillars to reinforce powerful religious and fashion messages yet more hidden titles are only revealed when read horizontally through the interlined of gold characters. On the sidewall are a series of gold plates with fashion language and biblical quotes etched on. The extenuated irony sees the juxtaposition of the text-work with the religious sculptures for the journey of the crucifixion. Text and installation are the artist’s major medium, who has, in previous occasions, ‘made’ poems using fashion advertising slogans.

This event is part of The Late Shows 2016 in Newcastle upon Tyne (http://thelateshows.org.uk/2016/st-dominics-priory) and sponsored by the Community Foundation Tyne & Wear and Northumberland.