I am a Beautiful Monster - a-n The Artists Information Company 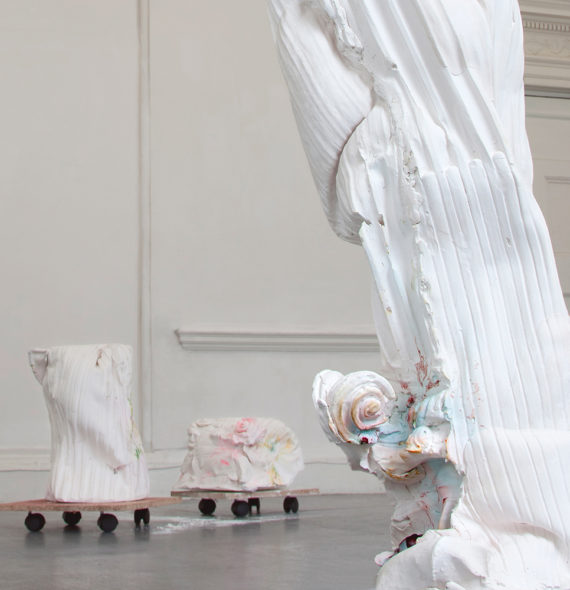 I am a beautiful monster

who shares his secrets with the wind.

What I love most in others

It’s a compelling thing for Doireann Ni Ghrioghair and Vanessa Mitter to use Francis Picabia as their muse, he would have readily returned the compliment. The opening stanza quoted above from Picabia’s poem BACCARAT, speaks of excess and a gleeful narcissism; the two qualities Ni Ghrioghair and Mitter employ to effect in their work, pushing the notion of taste to the limit. I am a Beautiful Monster posits our Western cultural landscape as a stream of excesses and self-serving distortions.

For Ni Ghrioghair classical architecture, with its columns standing proud and erect, is the perfect symbol of excess and narcissistic entitlement. Taking latex moulds of the eighteenth-century architecture of Dublin Castle, she mercilessly recast those columns in the unsupported latex moulds causing the columns to bend, buckle, deflate and become flaccid. If classical columns project an idealised form, Ni Ghrioghair’s sculptures render their subjects flawed, bulging, and fatigued with a magnetic allure. These historical fragments become enervated totems to a faltering empire.

Mitter’s paintings are high-octane and caustic, using the female form, that excessively sexualised allegory of all that is good, to make her point that the female gender is wrapped in a sweetness that can only ever mean ‘superfluous’ – like a perfectly formed, plump and curvy hollow candy wrapper. She uses endless layers of patterning, collage, and florid colouring to deliberate extreme; to the point that when viewed in the flesh, they are almost too vivid, too excessive.

Even with these in-your-face distortions, the works in I am a Beautiful Monster, have a beauty about them.

It’s beauty on their terms, which is what true beauty is.