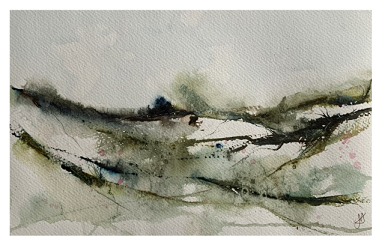 This session is part of Artmakers June programme of events is focus on the how people in creative jobs work, what got them started, and how they keep going? The aim is give the audience a solid understanding of how parts of the creative world work in Devon, and how they might start their business.

Confirmed speakers will include; Jill Harker, a painter based near Bude, Phil Parker, founder of artmakers, and a leading TV and film development consultant in Europe and mosaic artist Adela Webb from Holsworthy.

Jill works in a variety of mediums including watercolour, oil, acrylic, pastel and mixed media. She desn’t have a particular style or genre, prefering to see what inspires her on the day! Starting out painting in oils originally but progressing onto pastels when she had children. Jill is inspired by the wonderful wild Devon and Cornwall coast and moors, incorporating not only interpretation of the landscape but also its physicality and mood.

Phil is the CEO of BCre8ive the new online collaboration and production platform for creative individuals. Phil has worked in the media industries for over twenty years. One of Europe’s leading development consultants – productions include Wallace and Gromit – Curse of the Were Rabbit & Terry Prachett’s – Hogfather. He has worked as a consultant for the BBC, C4, Aardman Animation, Berlin Brandenburg Medianboard, Prime Exchange, developed Oscar® winning and box office feature films, and brought over 150 new writers into the UK and German film and television industries in ten years.

Adela is a self taught mosaic artist, with qualifications and a background in textiles, photography and graphics. Her journey into mosaics began in December 2015 when she received a gift of stained glass. She spent her early adult years moving frequently, including living in various parts of the USA for 9 years. While living in San Diego, California she often visited artist Niki De Saint Phalle’s Queen Califia’s Magical Circle sculpture garden and the huge magical mosaic sculptures left a lasting impact on her. Adela exhibits regularly with The South West Mosaic Artists group and also runs regular workshops from her studio and has been awarded the Platinum Certificate of Excellence by Craft Courses.

Hear all about how these practioners got started, what inspired them to pick up their craft. The challenges of starting a creative business in Devon, how they built their audience and grow their business, what makes these creatives tick?!

This event will be an informative presention led by Hilary one of the founders of ArtMakers aimed at shining a light on creative industies in Devon.