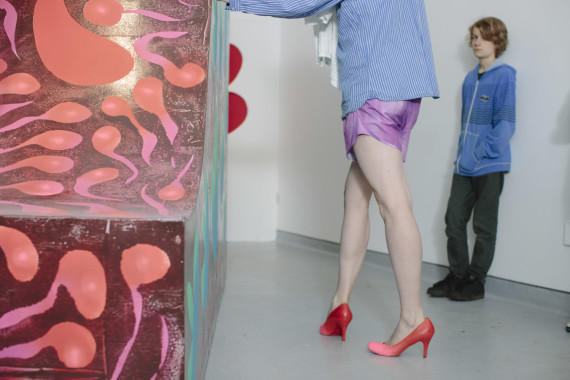 The exhibition and accompanying events programme seeks to generate new conversations about how copyright is currently impacting the way visual artists make and distribute their work, and demonstrates how artists are challenging the limitations of copyright through their practice.

The exhibition takes its title from a response Sol LeWitt made in Flash Art in 1973 to the accusation that he had copied the work of Francois Morellet and Jan Schoonhoven. He stated: “I believe that ideas once expressed, become the common property of all. They are invalid if not used, they can only be given away and not stolen…”

There will be a number of new commissions in Common Property, reflecting the current and evolving artistic interest in ‘playing’ with copyright frameworks and associated issues. Antonio Roberts, a digital artist from Birmingham, will show work that tests questions of creative ownership rights arising from today’s increasingly sophisticated digital technology. Owen Parry’s commission, Larry!Monument, is informed by his fascination with the phenomenon of ‘fandom’ and the fan-art aesthetic. His life-size ‘monument’ pays homage to the fictional romance between One Direction members Harry Styles and Louis Tomlinson, as dreamed up by the band’s infatuated fans. The third commissioned project is a site-specific piece by Hannah Knox, which draws inspiration from the Magic Eye series of ‘autostereograms’, popular in the ‘90s (these were 2D digital patterns which offered up illusory 3D images on prolonged viewing). Hannah will exhibit a series of new painted and mixed media works based on Magic Eye posters, complemented by a vast original Magic Eye backdrop.

Canadian-based artist Rob Myers’ Sharable Readymades project aims to return iconic art historical ‘readymades’ to the public domain. He will display several examples of these works as 3D-printable models. Intentionally simulating the way in which DJs sample, distort and layer the music of others, Edwin Burdis will present a new series of paintings entitled POLYTUNNEL-BANGERZ which sample and ‘remix’ existing artwork, including his own. SUPERFLEX, a group of Danish artist-designer-activists, describe their work as ‘tools’: models or proposals which can be used and modified by their users. They will be exhibiting Copy Right, a model of a chair that references the ‘knock-off’ imitations of Danish designer Arne Jacobsen’s ‘Ant Chair’, hugely popular in the mid-20th century.

Emma Parker and Penny Harris created the Parker Harris Partnership in 1990.Our partnership is now one of the leading visual arts consultancies in the UK. We specialise in the expert creation and delivery of visual arts projects spanning all disciplines. We work closely with sponsors to develop established valuable arts sponsorship projects. We have a range of clients including trusts and foundations, charities, large financial organisations, leading brands and individuals. We have a uniquely personal relationship with our clients and projects resulting in long lasting and successful sponsorships.