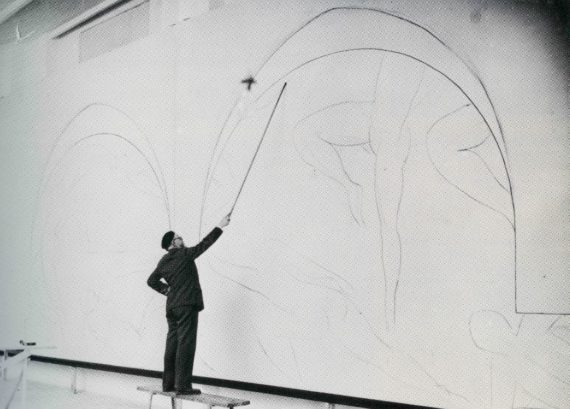 Tickets: £5/3 (includes a glass of wine at the end) can be booked here.

More information:
In a photograph dating from 1931, Matisse is shown sketching The Dance—a gigantic mural commissioned by Albert Barnes for his Foundation in Merion—with his charcoal at the end of a six-foot bamboo stick. This unusual practice stems from the artist’s discovery, dating from the time he was working on another work now in the Barnes Foundation, his 1906 Bonheur de vivre, that squaring up a small sketch, as has been the standard procedure for large paintings and murals since at least the Renaissance, was incompatible with his aesthetic. The bamboo stick resurfaces in Matisse’s studio at the end of the 1940s when is he working on his Vence Chapel, his old age further emphasizing the acrobatic nature of the feat, and the amazing control the artist had of his drawing tool. But while Matisse’s use of the cane is consistent with the artist’s creed with regard to two of the chapel’s mural—Saint Dominic and the Virgil and Child—it seems absurd when he dealt with the third mural, the Stations of the Cross, for which each of the fourteen stations were first sketched on individual pieces of paper at their final scale. For Matisse, a picture plane must always be conceived and perceived whole; the piecemeal approach is anathema to him—which is to say that the narrative structure of the Stations of the Cross is entirely contradictory to his aesthetic. Yet the choice of this topic for the Vence Chapel was fully his. What is one to make of such a contradiction? And was Matisse attempting to mask it, or on the contrary to reveal it, by the extraordinary rough manner in which he painted his Stations, a deliberate «primitivism» that has so far prevented Matisse scholars to give a close look at this work.

Yve-Alain Bois is Professor of Art History in the School of Historical Studies at the Institute for Advanced Study in Princeton. He has written extensively on 20th century art, from Matisse and Picasso, Mondrian and Lissitzky to post-war American art. A collection of his essays, Painting as Model, has been published by M.I.T. Press in 1990. With Benjamin Buchloh, Hal Foster, and Rosalind Krauss, he co-authored Art Since 1900 (Thames and Hudson, 2004). He co-organized the 1994-5 retrospective of Piet Mondrian in The Hague, Washington and New York. In 1996, he curated the exhibition “L’informe, mode d’emploi” with Rosalind Krauss at the Centre Georges Pompidou in Paris. The book accompanying this exhibition has been published in English under the title Formless: A User’s Guide (Zone Books, 1997). Other exhibitions that he curated include “Matisse and Picasso: A Gentle Rivalry” at the Kimbell Museum of Art (Fort Worth), for which he also wrote the catalogue (Matisse and Picasso, Flammarion, 1998); “Ellsworth Kelly: Early Drawings” at the Fogg Art Museum (Cambridge, Mass), which traveled to five other venues in the US and Europe (March 1999-August 2000); “Ellsworth Kelly: Tablet,” at the Drawing Center, New York (May-June 2002); and “Picasso Harlequin” (October 2008-February 2009) at the Vittoriano in Rome. Bois is one of the editors of the journal October and a contributing editor of Artforum. Among other projects, he is currently working on the catalogue raisonné of Ellsworth Kelly’s paintings and sculpture, the first volume of which was published by Cahiers d’art (Paris) in 2015. He also edited the catalogue raisonné of Matisse’s paintings in the Barnes Foundation, published in 2015 by Thames and Hudson.