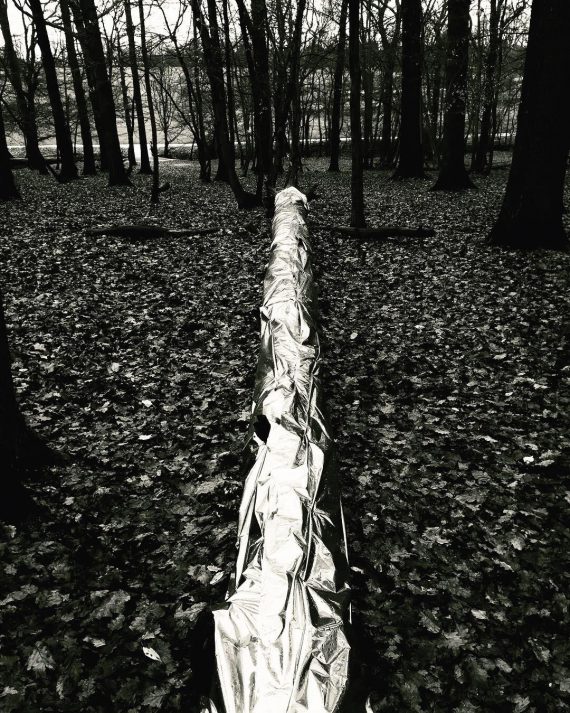 The reflected and manipulated object is that which operates in and beyond space, inwards and outwards, inducing vertigo, engagement and distortions of perspective. Here is a sense in which one can lose oneself. These visual principles rise and cross through different points, carrying mysterious moments of memory, experienced repeatedly. Each occurrence inspires something puzzling, performative, yet stoic; an object which presents views from disparate angles that engages and manipulates the same viewer but in different ways. This object can appear to carry a multiplicity of emotions and infer struggle.

The materials find themselves in an on-going battle; in same ways defeated, in others victorious, recalling the resonance of a particular condition. Presenting itself as a distorted reflection which morphs into a completely liquid form, or is camouflaged in its environment, what is left is emptiness with no real solidity.

Mehrak Davoudi working in a variety of media sculpture, painting, art performance, installation and mixed media. Mehrak uses range of media to engage the viewer from differing angles, she explores complex emotions and memories using reflection and manipulation, creating a multifaceted experience that is sometimes puzzling or even conflicting.

Mehrak lives and works in London where She continues to experiment with distorted perspectives and our sense of inward and outward space.

She was involved with art from an early age and worked and studied for Channel One of Iranian national television on Broadcasting the Art and design and also props for children’s TV shows between 1994 and 1998. She also worked as a garden and interior designer during this period. Soon after, Davoudi left Iran to France. After a while, she left Paris to Nederland and lived there for a couple of years. Finally, she moved to the UK (London) in the early 2003s and obtained a Foundation Diploma in Art and Design from Southgate College and granted a gold-award distinction. She also attended Middlesex University from 2011 and graduated with distinction in Creative Art. She continues further studies and graduated BA In fine art in 2016 and MA fine art in 2018 both awarded with first distinctions and Dean award. She is heavily involved in a multitude of projects maintaining and projecting psychoanalysis and philosophy, to reflect mainly concentrating on personal trauma, anxieties and sexual abuses.