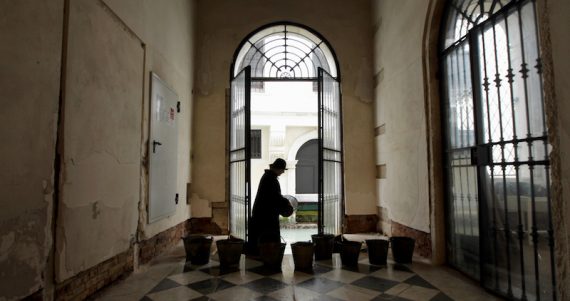 The performances are part of Kirwan’s ongoing inquiry into mourning, loss and memorial. They will complement Kirwan’s latest three-channel video work, perpetuum mobile, which was unveiled in May this year at the European Cultural Centre, Palazzo Bembo during the 58th Venice Biennale.

During the performance, Kirwan will make seemingly endless marks on large panels using large pieces of charcoal. This act of futile repetition echoes the absurd processes which Kirwan believes are essential to the act of mourning. Simultaneously, the composer Tom Lane will respond to Kirwan’s mark-making, thus creating a spontaneous and improvised soundscape. Visitors will become immersed in a compelling, meditative experience as they watch the repetitions of the mark-making and hear the haunting sound.

Kirwan’s performative work often takes place in outdoor sites, forests and beaches. Earlier this year, to mark the unveiling of ‘perpetuum mobile,’ Kirwan conducted performances along the Grand Canal, where she attempted to empty the sea with buckets. The upcoming performance’s location, on the ground floor of the 14th century Palazzo Tiepolo, in a room at water-level that leads directly onto the canal jetty, echoes the idea of confluence that is present in Kirwan’s work.

Kirwan’s work draws on her own experience of mourning the loss of a loved one. ‘My journeying and the futile activities are the performance of the searching and yearning which some psychologists identify as essential to the bereavement process,’ she explains. Since 2015, the artist has developed Memory Theatre, a trilogy of video work, alongside a series of live performances, exploring these themes.

The Memory Theatre trilogy and its related performances are underpinned by Kirwan’s inquiry into the concept of the ‘philosophical fragment’. The German Romantic philosopher Fredrich Schlegel posited a radical definition of this fragment as a dynamic process which aims at fragmentation for its own sake. Intrinsic to Kirwan’s futile reiterations and journeys is the essential incompletion which is itself the mode of fulfilment. She draws also on the Hegelian concept of memory as repetition that constantly reinvents itself.

Public: performances Thursday 24 October 2019: 11:00-14:00 and 18:00 -21:00pm.
Note: on Thursday there will be several performances lasting forty minutes each with short breaks in between, but audience members are welcome to arrive and leave at any time.

Free Entry
Location: (Near Campo San Tomà and Palazzo Pisani Moretta, on the Grand Canal). How to get there: Actv lines- stop: San Tomà.

Helen Kirwan is a British – Irish conceptual artist. Born and partly raised in Ireland, she now divides her time between the UK and Brussels. She practised law as a barrister in Dublin and London for nearly twenty years before becoming an artist full time. She has a B.A. (First Class Honours) in Fine Art from the University for the Creative Arts Canterbury (2000), an MA in Fine Art from the University of Middlesex (2002) and an MA in Aesthetics and Art Theory (2004) from the Centre for Research in Modern European Philosophy, London.

Kirwan’s videos, video installations and performances which include perpetuum mobile (2019), ‘Memory Theatre’ (2017), ‘Fragment and Trace,’ (2015) and ‘Image of the Road,’ (2013, with Simon Pruciak) have been exhibited internationally including at the European Cultural Centre during the 56th, 57th and 58th Venice Biennale. Her other recent exhibitions include: the Bodrum Biennial 2015; Bodrum; ‘East Sussex Open’, 2016, Towner Art Gallery, Eastbourne; ‘October 15 Ceremony’, 2016, Gallery Çenkaya Ankara; ’Thread of Light,’ 2017, P-21, London and Sussex Open, 2017, Towner Art Gallery,

Eastbourne. Her work is regularly shown at media and performance art festivals, including Rapid Pulse Festival, 2016, Chicago, Fonlad Festival, 2016, Coimbra, Portugal, International Festival of Projections 2016, Kent and Festival Internacional De Videoarte De Camagüey, 2017 and 2019, Cuba. During 2019 she will be artist in residence at Arts-Iceland/ Outvert Art, Iceland, the Sirius Arts Centre, Cobh Ireland; and in January 2020, at the Tyrone Guthrie Centre, Annaghmakerrig, Ireland.

Kirwan has a long standing collaboration with the award-winning Dublin-based composer Tom Lane and the cinematographer Simon Pruciak. She has conducted other live performance- experiments, including an outdoor performance on a beach and in the sea during the Folkestone Triennial Fringe, UK (2017), and a performance with live sound by Tom Lane and a five-channel-video installation at The Space Arts Centre, London, UK (2018). Kirwan has contributed papers and film screenings to a number of interdisciplinary conferences and has lectured and taught contemporary fine art criticism and theory at UK universities including the University for the Creative Arts, Canterbury, UK.

Tom Lane is a composer, sound designer and multi-instrumentalist living in Dublin, Ireland. Born in Bristol in 1984, he studied music at Balliol College Oxford, composition at the Royal Academy of Music, London, and composition and experimental music theatre at the Berlin University of the Arts.Tom has been nominated for an Irish Times Theatre Award on 5 occasions, most recently Best Soundscape for Whitby and Best Opera for Front of House in 2018. Recent work includes composition and sound design for Yaël Farber’s Hamlet and Annabelle Comyn’s Look Back in Anger at Dublin’s Gate Theatre. In 2018 he also composed music for choreographer Hannes Langolf’s new physical theatre piece Unruhe at Theater Trier as well as Backstage, a new opera House as part of Cork Midsummer Festival commissioned by Cork Opera.

Notable performances in 2014 included HARP | A River Cantata as part of the Tiger Dublin Fringe and Twelfth Night directed by Wayne Jordan at the Abbey Theatre, Dublin. His work on Between Trees and Water with Painted Bird Productions was nominated for an Irish Times theatre award for Best Sound Design. In 2012 a newly conceived version of his opera FLATPACK directed by Conor Hanratty was nominated for Best Opera Production by the Irish Times theatre awards. With Bryan O’Connell he created the music for DOGS by Emma Martin Dance (winner of the 2012 Absolut Fringe Best Design and Best Production awards). Tom Lane is the inaugural recipient of the Seán Ó Riada PhD scholarship in composition for theatre at University College Cork and a 2016 Next Generation Bursary from the Arts Council of Ireland.