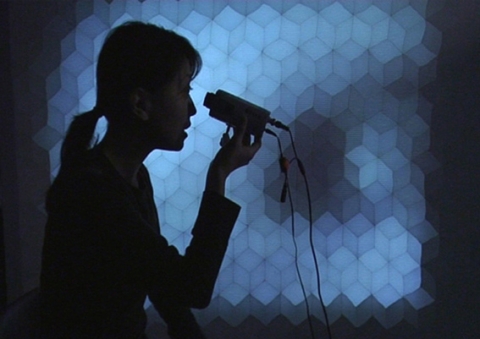 Paul Gittins introduces a new form of visual media, The Electric Shadow Screen, this device divides light through hundreds of handmade pixels. A live video feed enables the viewer to appear through a screen of paper cubes. Other screens use coloured light to create moving shadow patterns. A selection of work that uses the optical and physical properties of television will outline the evolution of this new medium. There will be a series of live events on Saturdays at 2.30pm — 2nd February — "Composition with Cello and Paper Screen" — Matthew Radciffe, A surveillance camera films the cello whilst the music is played, and is projected through a screen of paper cubes, this will be followed by a shadow dance performed by Joel Aragon — 9th February– "The Shape of His Voice"– Performed by Marcus Tristan Heathcock (Associate Composer at the St Petersburg State Symphony Orchestra Klassika) singing improvisatory melodies and textures based on words and musical fragments from Stockhausen’s music. Using a camera and projector the image of his mouth is projected through a screen of paper cubes. creating a visual architecture that follows the shape of his voice. For other events see website