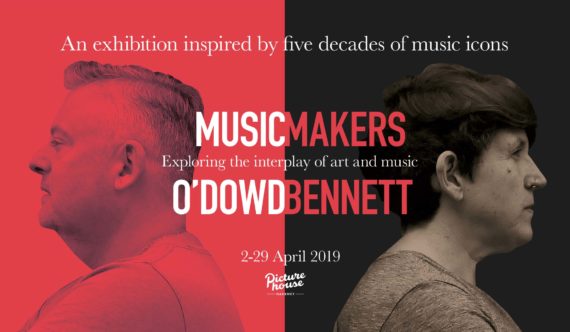 This series of new works explores the artists’ connection with their music icons and the creative influence of art and music on each other.

Music and art evoke strong emotions. Whilst listening to music is an ongoing influence on both their practices, it is, however, the stories of the icons behind the sounds that have been the biggest inspiration to them as artists.

This exhibition presents artworks of icons who, in addition to their music, have also expressed their creativity in other forms including painting and sculpture. Crossing over five decades of music, this series includes Patti Smith, Florence Welch, John Lennon, Bob Marley, Boy George, David Bowie, Courtney Love, Yoko Ono, and others.

Julie Bennett is driven by her lifelong obsession with music, spending her teenage years working at a record shop and post-graduation working as a graphic designer at some of the top UK music and celebrity magazines. Her bold, unapologetically confident portraits celebrate both the unknown and the famous through the immediacy of her paint handling. Dripping wet, broad-brush marks give an appearance of works that are fresh out of the studio.

Gerald O’Dowd spent his childhood surrounded by music, everything from Irish rebel songs to David Bowie, blues and reggae. Stating Bob Marley as his first musical interest, O’Dowd studied Fine Art at the University of East London. He uses his art practice as ongoing therapy following an acute bout of mental illness in the 90s. He creates emotionally charged works using film, sculpture, painting, poetry, and song to convey his belief in the power of love and unity.