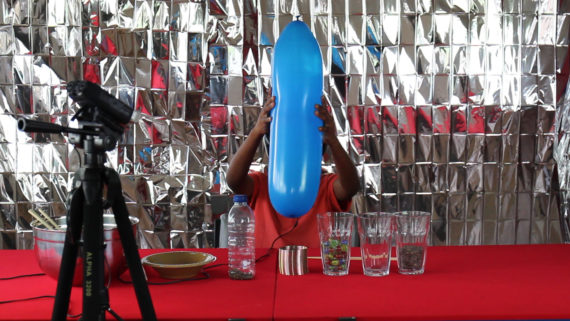 Join us for the premiere of Clubhouse, at its first public screening at Bedford’s Vue Cinema, this January.

Created by artists Julie Myers and Maria Anastassiou and the residents of Bedford’s Chester and Carlisle Roads, the short film documents a year-long art project on the two streets in Queen’s Park. Through a series of workshops and events: script writing; camera and sound sessions; costume and prop making, local families became the storytellers. Exploring ideas of place and neighbourhood, alongside tales of sea monsters, animals and slime, Clubhouse combines observational documents of everyday life, staged scenes of performance to camera, sound recordings, special effects and footage from the children’s own cameras.

In addition to the workshops, the artists transformed a small green in one street into an outdoor film set, with a green screen and scaffold tower. Taking place during April to March of 2018, over sixty residents took part on a regular basis, sharing and developing ideas with the artists.

Annie Bacon, Creative Producer at Bedford Creative Arts said: “Clubhouse is fresh with surprise, generosity and spontaneity that I think is a direct result of the relationship between the artists and the residents. This is a great opportunity to show the public the outcome of such programmes, which would not be possible without the public’s participation and the funding of Arts Council England and organisations such as BPHA, Bedford Borough Council and People’s Health Trust.”

The filmmaking project has gone on to act as a catalyst for a wider programme of creative activity on the two streets, including a family sports day, a regular drawing and games café, photography projects, an inter-generational football match and the residents’ recipe book.

The premier of Clubhouse will take place on the 23rd January, from 5-7pm at the Vue Cinema on River Street.

Tickets are free, though booking is essential.