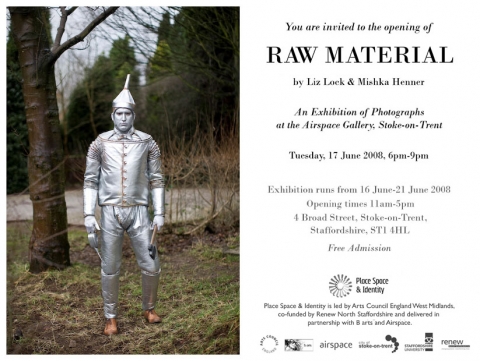 AirSpace Gallery Would like to invite you to our next exhibition ‘Raw Material’ works by Liz Lock and Mishka Henner The exhibition is open the 16th June – 21st June 11am – 5pm. The Preview is on the 17th 6-9pm On entering the 21st century, much emphasis is placed on the need for northern towns and cities to develop aspirational identities to attract outside investors and succeed in the global marketplace. Having worked in the north of England for the past four years, Lock & Henner came to North Staffordshirebetween October 2007 and April 2008 and found a landscape scarred by economic forces that have left deep psychological and physical wounds.Throughout our series, motifs associated with vulnerability and a coming of age appear alongside motifs of role-play and faith. Raw Material was commissioned by Arts Council England West Midlands and is an exploration of North Staffordshire, a territory rich in cultural andartistic heritage seeking to forge a new identity in a post-industrial era. Best Regards AirSpace Gallery