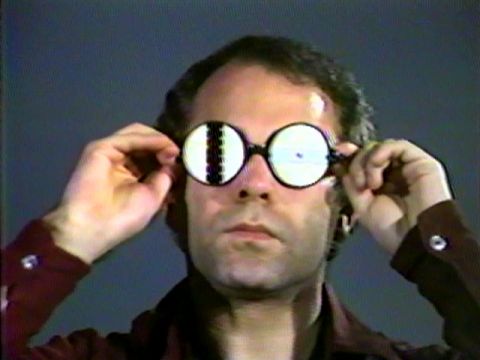 Stuart Sherman’s work spanned video, performance and theatre. He is best known for his series of performative ‘Spectacles’, of which nine are shown in this exhibition. Often produced just for camera, these inventive performances took their cues from Sherman’s other outputs such as writing poems and plays. Sometimes the objects appear to be used simply because they make a sense visually : the box fits through the hole, in others the organisation of the objects creates mini scenarios : toy car crashes into a chair, the chair falls over. These little narratives move on rhythmically through the length of each work, with the objects, people and Sherman himself in constant movement, adjustment and re-arrangement. Stuart Sherman’s work is rarely exhibited on this scale and this exhibition is the first of its kind in the UK, offering an overview of the Spectacle series.

Drawing from a rich history of painting, sculpture, popular culture, folklore and fairy tales, the artwork mixes everyday objects with high art, fashion, and aspects of popular culture from Japan, Europe, and the US. Combinations of objects and images manifest in absurd, idiosyncratic ways, setting up problematic relationships between disparate elements of pop and folk culture. These artworks host complex themes of personal, cultural identity, fantasy and our collective relationship with commerce. Particularly, the work looks to make a sense of the idea of national and regional identity, given we are increasingly exposed to a shared global pop culture, and prompts audiences to reflect on their own cultural experience. ​ His interdisciplinary practice, combines performance, painting, clothing, social media, video games, curating and a multitude of collaborations. Bruce Asbestos earned a degree in Fine Art from Nottingham Trent University, winning a scholarship at Musashino University, Tokyo, and went on to the Hive business school. He obtained a Master’s Degree at Nottingham Trent, during which he was awarded a scholarship at RMIT University in Melbourne, Australia. ​ Recent projects and exhibitions include, S/S 2021, Power, National Justice Museum, S/S 2020 Bonington Gallery, Bruce Asbestos X Juliana Sissons, Primary, A/W Collection, Kunstraum, London, A/W 2018 Nottingham Contemporary, Arts Council International Fund project to NYC and Philadelphia, Bruce Asbestos A-B Testing, Concrete, Hayward Gallery, London. MTN DEW, Commission by EM15 for ‘Sunscreen’, Venice Biennale. Ivan Poe / Reactor, Plymouth Art Weekender. He was nominated for the £300,000 Paul Hamlyn Breakthrough Fund 2013/4. ​ Bruce's digital catwalk S/S 2020 is now part of Government Art Collection. ​ ​ ​ "Through his shrewd use of social media, personal re-hashing of global pop culture and use of new digital technologies, he has established an unmistakable visual identity and unique brand (complete with logos) to almost become a ‘living artwork’." Art Review ​ "This is Art for the social media age" The Stylist ​ "Maybe Asbestos is playing the role of spectator and is waiting to see what the Internet will make of the extreme quantity of work" VICE ​